What geological and climatic factors could result in a planet where the only biomes are oceans, deserts and wetlands? A wet OR dry world

Imagine a planet that sustains life, has oceans and continents plus an earth-like atmosphere; a planet similar to earth in most ways, but with only extremely dry and extremely wet biomes. Science fiction is rife with desert-worlds, swamp-worlds, ice-worlds, gummi-worlds... Could there be a swirl world, of swamps and sand?

The Tibetan Plateau is a vast elevated region in central Asia, resting north of the Himalayas. The average elevation is 4500 meters and it is very dry; mostly arid steppe and tundra. 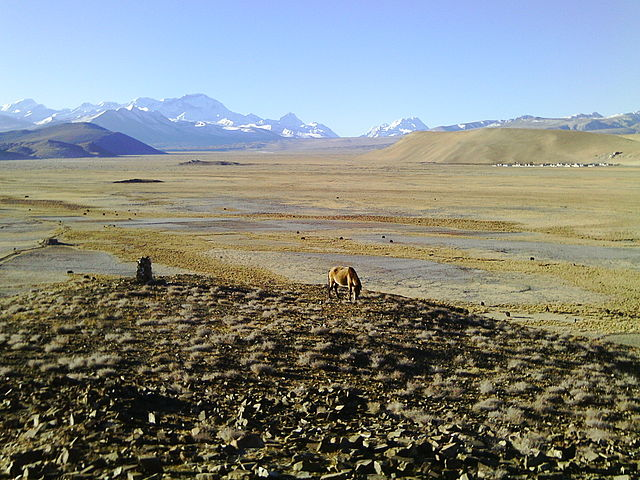 The dryness is not just due to the rain shadow of the Himalayas down south; it is the elevation of the region itself. Incoming wind has to rise a couple kilometers, as it does so it cools down. And cool air can maintain less water than warm, so it water droplets condense and rain is released on its way up. A plateau of this altitude can never be swampy.

Just down south, over the mountain peaks, Nepal is full of valleys like these: 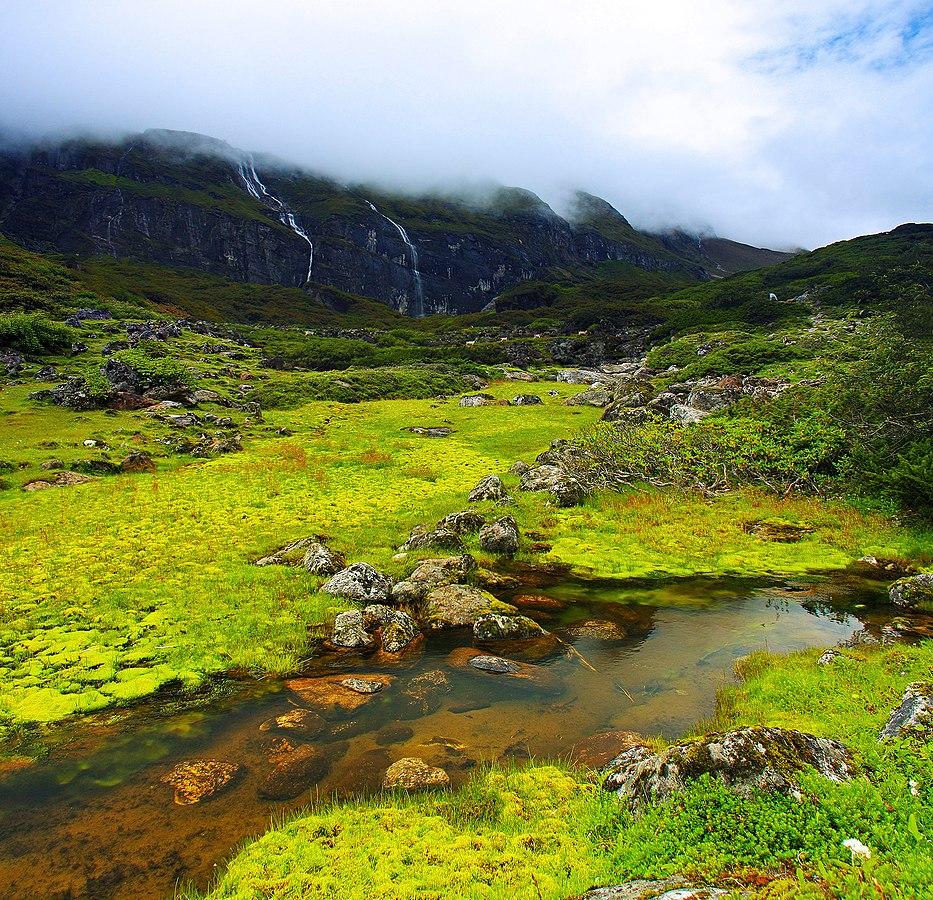 And below that is Bangladesh, which is obviously even wetter.

So one solution for a planet of wet and dry is to have extended plateaus sprawling over the surface, with wetter valleys and seas between them. Definitely make both the poles plateaus as well, unless you can live with an ice cap biome.

The dominant form of autotrophs require water for their reproductive cycle, and have been unable to evolve a way around this

The type of planet you are describing actually existed for a time in Earth's history, from the middle Devonian to the Carboniferous periods (~380-300 Ma), primarily in the Devonian though. The reason for this is that plants didn't conquer the land all at once, the very earliest branches of vascular plants (ferns, horsetails, and club mosses) are resistant to drying out as adults but still require water to reproduce. They lack seeds and rely on water to allow their sperm to fertilize their eggs (and keep their eggs from drying out). In a sense they are plant "amphibians".

What ends up happening in the Devonian and Carboniferous is you get this system where the coastal wetlands and immediate riversides are heavily vegetated swamplands (i.e., the coal swamps), but plant life drops off really quickly the further one gets away from the riverside. There were some horsetail meadows in areas slightly further away from the rivers and uplands with some seed plants but that was about it. This is because most of the major trees are some form of giant club mosses (Lepidodendrales), giant horsetails (Calamites), or tree ferns, all of which are dependent on water to reproduce.

Now, what happened in our world is that seed plants evolved and were able to colonize the drier areas of the planet that the ferns, horsetails, and club mosses couldn't. But if seeds never evolved (i.e., there was some evolutionary constraint preventing it) then plants would still be stuck around the waterways. This would produce a world that would mostly be ocean, "swamp", and "desert", though there would be some other biomes present as plants tried their best to escape their ties to the water even if they couldn't fully break them. 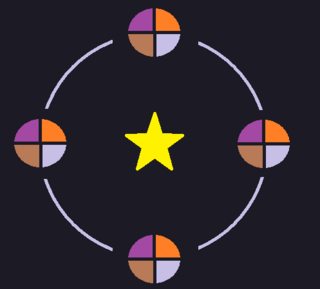 A day lasts a year on this planet. It is an extreme place. The sun relentlessly bakes one half of the planet. All the land dessicates into desert. No rain falls. On the other side it is night. The land radiates away its heat to space and everything freezes. There is no wind and no weather. Both sides are bone dry. They switch places over the year.

There are two places where it is not so dry. One is the ocean. It might freeze over on the cold side but deeper down the temperature is the average yearly temperature and it can be reasonable.

And the day/night terminator. This is the place where night turns into day and day turns into night. This line slowly makes its way around the planet. All the water that evaporated from the hot side condenses as it moves into the cold side. Torrential rain and storms ensure. The terminator is where your wetlands are. They are wetlands only for a while, as they thaw under the storms. Soon they will bake dry in the heat of day. Some of the terminator life does its things only in the short season, then hibernates the rest of the year. A lot of the terminator life is mobile and moves along with the rain.

Your wetlands move around the world, separating hot bright desert from cold dark desert. On those rare occasions you can see the sun through the clouds, the shadows are long because it is always dusk or dawn at the terminator.

More on this scenario is written here by the inimitable Cort Ammon. Effects of a non-rotating Earth

Inimitable, but I try.

It sounds like your world has a much more efficient water cycle than the Earth, coupled with different weather patterns.

On Earth, the water cycle acts much like a dehumidifier. If it wasn't for the water cycle, then evaporation from the oceans would cause the atmosphere to become completely saturated with water vapour, that is, the humidity would be 100% everywhere. The reason we don't have that is that the sun heats the ground, which heats the air and causes it to rise, and as it rises it expands and cools, which causes water vapour to condense and fall as rain. Once that's happened you're left with much drier air.

It sounds like on your world the same processes happen but much more efficiently. Water evaporates from the ocean, producing moist air. Due to the prevailing winds this moist air blows onto certain areas of the land, where it rises and falls as rain. But while on Earth this tends to happen more or less everywhere to some degree, on your world the rain tends to fall straight away on those areas downwind from the sea, leaving very dry air that doesn't produce rain elsewhere.

So why would this happen? There's a few things I can think of. Maybe the water cycle is just stronger on your world - the sun is hotter, or the ground generally darker so that it absorbs more heat, for example. Perhaps there is also less water on your world - smaller oceans than Earth, compared to the amount of land - so that the air is less saturated with moisture generally.

Maybe there is also a lot less wind in general, so the air doesn't get mixed about a lot like it does on Earth, and maybe the weather patterns are generally a lot less chaotic. This could be an effect of the topography - there are mountain ranges in just the right places to channel the global wind circulation into very consistent patterns. This seems quite plausible to me, and I would expect worlds like yours to be within the natural variation of Earth-like planets in the universe.

You might be able to have a world that was created by different formations of tectonic plates & cosmic events affecting the ice ages of a planet.

A swamp planet that gets hit by an asteroid at such a speed that it created a desert! It might be a glass desert to be honest. I'm not sure how long this would be able to last, it may come to equilibrium over time. I also doubt that this would even work.

Not to mention that this theory would result in a single patch of desert (or even a series of desert patches caused by an asteroid storm) rather than beautiful swirling deserts to bogs.

21
Effects of a non-rotating Earth

6
Postapocalyptic, Venus-like planetary atmosphere
0
How to create an earth-like world that's largely desert?
6
Abnormal Freezing Weather
30
How can glass marbles naturally occur in a desert?
4
How to maximize the sand depth of a desert planet
5
How do you map the climates and biomes on a tidally locked planet with no Coriolis Effect?
5
How would this atmosphere change the way weather works and therefor biomes
4
Can an Earthlike planet orbiting a K-type star have longer days and extreme thunderstorms?
1
Is this an accurate environment for life on a super Earth speculatively?