The air is warmer at the top of the mountain. How?

I was thinking about a world where hot air rises to the extent that the top of the mountain is always warmer than the bottom. I guess this would be something like a permanent planet-wide inversion layer. What would be needed for this to happen? E.g., a very small planet, hot close parent star, very thick atmosphere of a specific composition?

The hazy, opaque atmosphere of Titan reflects much of the incoming radiation from the SUn back into space. But it does not similarly reflect infrared heat coming from the planet surface. The result is that the surface is cooler than the atmosphere.

I am suspicious that "upper atmosphere" might be fairly high up. The upper atmosphere (stratosphere) of Earth is also warmer than the troposphere layer next to the surface.

Clearly, (opaquely?) a change in radiation absorbtion / reflection at altitude can cool the surface as is seen by high altitude sulfur- containing dust clouds that are emitted by volcanoes - these clouds cool the surface for some years after the eruption.

So for your world: you will produce an antigreenhouse effect by parking highly reflective clouds in a layer not far above the surface or perhaps extending up from the surface. This white fog reflects both visible and infrared radiation. The fog layer stops a little higher than the highest mountains. I here assert that this will produce a thermocline with high temperatures at the top and above the clouds, and colder temperatures as one descends to the nearly lightless surface of the planet. 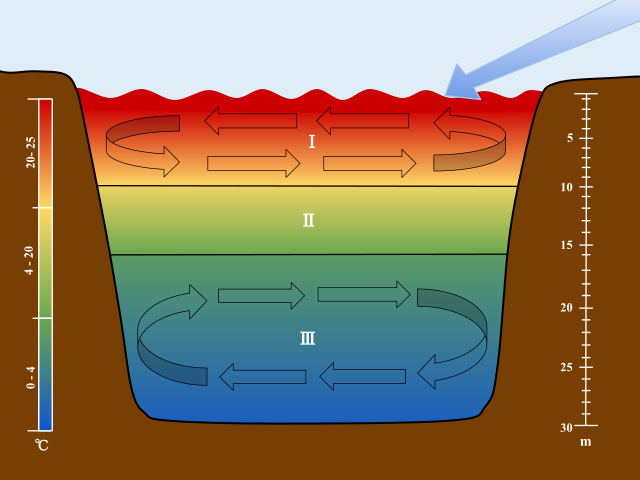 This answer is highly speculative, but there are no science tags, so let's launch the idea.

Say you'd have a strong attractor, relatively near your planet, in elliptical orbit around the planet.

At two moments each "month", the attractor will be in perihelion, very close to the planet. There is no apocalypse and the planet itself remains near to its orbit around the star, but tidal forces will cause the atmosphere to bulge in the attractor's direction. Particles get accelerated while going up. As a result, you'd have friction forces which increase on higher altitudes compared to lower altitudes. This turbulence friction can warm up the upper atmosphere. Hence you'll get a temperature inversion where the attractor is. Mountain tops will warm up.

There is still conservation of energy: the planet rotates, the attractor will stay where it is. At some point, the air (cooled off in space) will be falling back to the planet, causing cooler weather on the opposite side.

One of the more idyllic backwaters of the future solar system is the North Mercury colony. Within the confines of the Gossamer Wall, an oxygen-rich atmosphere has been built up from the region's once-frozen lakes. Abundant plant life grows, fueled by carbon freely donated from Earth, that was flung from the boundary of space by the exospheric plows that used solar sails to sort gas molecules and end Earth's ancient climate crisis.

But the terrible chill of Mercury would never have been moderated, and the ice would never have melted at all, if it were not for the warmth of the Kandinsky Mountains. If you go climbing on one of the hot rims in summer, when the light of Ten Suns shines on your back, you'd better dress for the weather!

Not the answer you're looking for? Browse other questions tagged climate atmosphere .

6
Could there be an upside down hurricane on a gaseous super-Earth
6
How would this super-earth world be? (Creature evolution)
6
Would a denser atmosphere hold in more moisture even if the temperature was exactly that of Earth's surface temperature? (Atmospheric Density)
10
What thickness of atmosphere and strength of magnetosphere would I need for a planet to have a deadly daytime and a hospitable nighttime?
12
What might be the climate inside a "sky abyss" on a tidally locked planet?
2
Appearance of an Ammonia World's Atmosphere