How does a Sphinx strangle its victims with no hands?

The Greek Sphinx is a mythological creature with a woman's head and the feet of a lion, which kills its victims by strangulation

While this is all well and good for a written myth, it has some glaring issues that won't do for any sphinx I add to my world

To explain, though both humans and lions are capable of strangulation/suffocation, they do it in different ways. A human will use their hands, either directly or using some sort of tool; the leonine feet of a sphinx are inelegant tools of running and slashing, with no capacity to do the fine work of human strangulation. A lion will use their powerful jaws to clamp their prey's throat; the sphinx's mouth is tiny and weak, and could not withstand constant use in strangulation

The sphinxes for my world would be smaller than lions, close to humans in size. The head is human-like, as is the neck, which is short and curved. The rest of the anatomy is leonine. Like the sphinx of mythology (and lions to some degree), they would strangle/suffocation all of their prey and victims. They would have a similar set of prey to leopards, but with a significant number of humans mixed in. I could make small tweaks to details of the body, if it is required for this strangulation

Is there some way that these sphinxes could realistically strangle or suffocate their victims?

Snake for a Tail 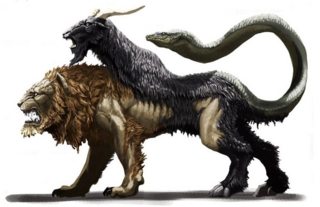 Much like the Mythical Chimera, the Sphinx has one or more long scaly tails. These tails are in fact live constrictor snakes that are used to strangle the victim.

Most depictions of the Sphinx have a normal lion tail. The Sphinx likes to keep the snake tail secret as they don't want to be associated with the more beastly Chimera. So they sit (often for years straight without moving) with their tail underneath them, and only reveal it when it is time to strangle.

Why the Great Sphynx lost her nose

In 1378 CE, Muhammad Sa'im al-Dahr destroyed the Great Sphynx' face, and most modern scholars always assumed only her nose was cut off. But if you look at the damage closely, the eyes as well as the nose are gone. This was because Muhammad Sa'im al-Dahr, upon discovery, was captured by her seductive talents. As a pious muslim, Muhammad regarded the statue as haram for that reason. He cut the face, destroying the eyes and the nose.

When you encounter a sphynx, or a well-crafted statue of a sphynx, she will hypnotize you. The face is so beautiful, you'll get hypnotized, you'll keep looking at her.

The life sphynxes that existed in the age of pharao Khafre used this talent to approach a prey closely, and freeze it. While the prey is hypnotized, it will keep staring at the sphynx, into her beautiful eyes, exposing its throat, without any defense.. The sphynx would strangle the victim, by leaning on the throat, or slash the throat with her claws.

A big cat like a lion or leopard could easily suffocate a human with only its paws. It could pounce on a person’s back and pin them to the ground as it put all of its weight into the back of the neck, which would quickly lead to unconsciousness and death

It can give a powerful blow with its claw on neck or spine of the victim, which will make the victim unconscious. Then it can drink the blood from the neck.

It can jump on the victim from a tree or stone with nails piercing the body of the victim.

It can run fast and hit the victim with great force.

This problem is solved by ART:

The depiction to the left is that of a sphinx (Gustave Moreau's Oedipus and the Sphinx), those to the right are symbolic representations of nightmares (Daumier's Horse Meat is Healthy and Digestible & Füssli's The Nightmare, resp.) (I thought I remembered seeing a combination of the two, but I might be mistaken).

The sphinx suffocates by burdening her victims. This can be done both physically and psychologically.

This is not at all surprising, given the etymology of the word 'sphinx':

"In English from early 15c., from Latin Sphinx, from Greek Sphinx, said to mean literally "the strangler," a back-formation from sphingein "to squeeze, bind" ([ref.] 'sphincter')"

I think the key here is in your use of the term "human-like", in your description of the "sphinxes for [your] world".

Compared to real-world big cats, yes, human mouths and jaws are both tiny and weak. But jaw strength is not a significant issue here. A normal human jaw can produce something like 125 pounds of pressure, but it takes only about 11 pounds of pressure to stop blood flow in the carotid artery. (I accept my numbers might be somewhat off, but not enough to change the results)

So the strength is there. What about size? Here's where the "human-like" comment pays off. You're obviously already mixing and matching biology here, so why not make one last tweak, that doesn't have to have any outwardly visible indicators? Just make the Sphinx' jaw have a wider range of motion than a real human jaw. Slightly stretchy-er skin around the sides of the mouth (need not be noticeable when not actively being stretched), and similarly unnoticeable small subsurface adjustments to jaw muscles and bone connections, and you have the appearance of a human, but a gaping maw when needed.

Finally, what about holding on long enough? With a lion body (and presumably at least somewhat comparable, at least proportionally, muscle strength), I'd think the strength and claws would be more than enough immobilize prey long enough for them to lose consciousness.

Not the answer you're looking for? Browse other questions tagged creature-design mythical-creatures .

41
How do centaurs get enough calories to live?
20
Anatomically Correct: 4-legged sapient creatures (“centaurs” etc.)
13
What would be the proper latin terminology for half-human anatomy configurations?
2
A predator that uses an airborne chemical to make prey not be afraid of it
6
How can I explain that my human vampire developed venom?
6
How could a quadrupedal human evolve?
11
How do Demigryphons hunt?