Taxonomic Ranks on a World with a Creator

Imagine a world like Earth (same size, distance from a sun-like star, gravity, atmosphere, that went through similar geological periods) but which was truly created by a creator (aka a God).

Due to fossils being discovered very early - the people of this world believed strongly in evolution and the idea of a creator was seen as ludicrous.

That was, until, the Charles Darwin equivalent of this world decided to classify all the species into a taxonomical tree - Because if evolution was a thing, that would mean all animals would share a common ancestor.

Due to the animals of this world being created by a Creator and not by evolution - what he got wasn't a tree, but more or less of a collection of created kinds.

Now the question is:

But that sort of taxonomy doesn't seem to work when things don't share common ancestors, because branches would come out from "nowhere".

Here are a couple of rules of the world that might be useful:

Note: To be clear, this question asks what form of Taxonomy hierarchy system would better suit a world in which life is created, not evolved - Because a branching tree wouldn't be suitable if A) complex life can "spring" at any moment.

mkmcnxnxmkmcnxnx
6122 bronze badges
New contributor
mkmcnxnx is a new contributor to this site. Take care in asking for clarification, commenting, and answering. Check out our Code of Conduct.
$\endgroup$
5
Add a comment  |

In general, we classify things according to how we perceive them being similar or different. Fish, sharks, and whales, for example, are quite similar. They're cylindrical swimming things that live in the water and use fins for propulsion.

Fish and trees, on the other hand, are quite different. One swims in the water, the other is practically dormant on the land.

Genetic taxonomies on Earth would actually suit your world pretty well, if your world basically has a bunch of Earth-like life on it. Things in one taxonomic group, because of the genetic similarity, tend to be suited to similar behaviors in similar environments, and therefore tend to survive that way. You don't see very many mammals flying or swimming because that's quite an evolution to get from walking on land to those places.

Of course, bats and dolphins put a kink in such classifications, but it's not hard to just call bats "birds with teats" and dolphins "weird fish".

A bat might be a mammal-bird, while a snake is a land-eel-fish. You go can hog-wild if you want, or just create a couple dozen primary classifications based on Earth life that you shoehorn all your alien things into.

Since your world still has evolution with all its charms, the obvious taxonomy is actually the one we already use with one extra at the head:

This "variant" rank categorizes according to which creation event the given species originates in. You might label them by date, location, or both.

If creation events happen a lot, it probably makes sense to trim several ranks off, because most things end up being unnecessary: 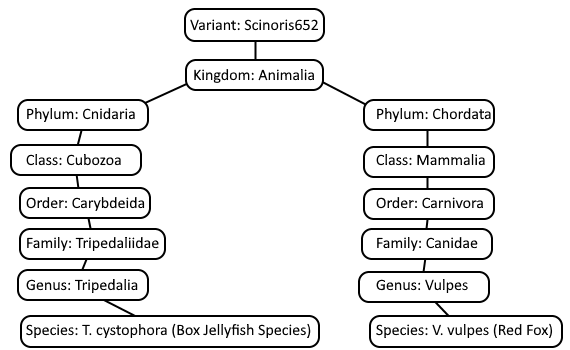 So you end up with a lot of variants that each have two or three ranks.

On the other hand, if only a handful of creation events have ever occurred over millions to billions of years, evolution will be the driving force behind speciation, so you'll end up with a few variants that otherwise have normal-looking taxonomies.

Your scientists will likely be split about whether to re-use common ranks (do multiple variants have an "animal" kingdom) or to use different terms for all of them.

It's more convenient to call all animal-like entities "animals", but less precise. The debate may have inadvertently caused a fire in the opposing group's printing press. I mean, it was clearly caused by magicoso->aldfey->pixies.

However, maybe the creation events spit out a lot of lifeforms, but it actually re-uses a lot of them. The hound from Psinog147 is compatible with the coyote from Barple39 and the fox from Crenatia952. In this case, you'll start getting a lot of creatures that basically are in the same family, so you'd see the classification take that into account.

You mentioned that each creation event has non-compatible species. If you just meant the species can't naturally produce viable offspring (like a wolf and an ostrich), I wouldn't change too much.

So you could potentially have Variant -> Elemental Group -> Base Proteins -> Kingdom -> Etc. At this point, the "variant" group might more academic than practically significant, and might get dropped as a taxonomy rank, instead being a category of some kind.

As Spitemaster points out in another answer, your creatures with different proteins or base elements might have some weird interactions you can use for flavor or plot points.

For example, silicon-based lifeforms could be toxic to hydro-carbon lifeforms, so non-adapted HC "predators" could end up eating an SI "prey" that ends up digesting the HC dude from the inside out.

You can mix and match all of these methods as you see fit. You can also use different methods for different kinds of life, or for different cultures in your world.

The biggest thing is to come up with a set of rules on how you want to classify things then stick to them as best you can. When it gets weird, improvise, and don't be afraid to make things that seem wonky. Real life is sometimes wonky too.

Taxonomy was started by Linnaeus way before any concept of evolution was developed by humans, actually in a time where a creating god making the world was the firm belief.

Taxonomy doesn't require evolution to work: it just classifies organisms based on similarities.

It can get help from genetics to assign elements, but it can work fine also without it. At the end it is just a labeling system which poses no constraints on nature. 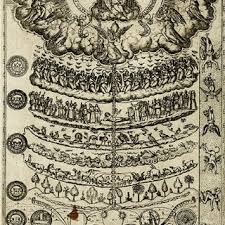 Its Called The Great Chain of Being

In Scholastic Philosophy, all creation was taxonomically organized on a hierarchal framework with God at the very top and descending from Angels to Humans and from Humans to more complex animals all the way down to inert matter. In other words people already did this in the past.

A bit of a frame challenge:

Why do living organisms need to be different than in the real world? All you need to do is interpret the data differently, as many people do today.

As there's no reason why creatures with similar-looking skeletons need to be from related creatures, the problem ultimately comes down to what a world created recently would look like. Your creator could have buried hydrocarbons (oil) for the use of his creations. Radioactive materials could be found in steadyish-state concentrations to help people learn about physics, if that aligns with your god's purpose.

You can essentially always come up with explanations as to how the world got to be the way it is, and in many cases it requires advanced science to determine that getting from state A to state B is impossible without active intervention. This includes biologically.

To have a "forest" of life rather than a tree, the changes would be subtle. Having irreducible complexity is perhaps the big one - but again, people are very good at coming up with possible ways things could happen, and there'd be doubt as to whether there actually is irreducible complexity.

There'd be big consequences of that - a left-protein creature eating a right-protein creature might not get any usable protein, and it would thus be less nutritious. Silicon-based lifeforms might have significantly different characteristics than carbon-based ones (but maybe that's a separate question).

Not the answer you're looking for? Browse other questions tagged taxonomy .