How could a shrink ray work?

I'm working on a novel, which involves a shrink ray. Kind of like the one in Honey I Shrunk the Kids, and involves a small Laser-esque (or Laser) beam that shrinks the thing it hits.

Problem is, it clearly isn't realistic. Conservation of Mass, Square-Cube, brain area, lungs not working, the list goes on. But hypothetically, what would be the most plausible way to make a shrink ray?

Note that they couldn't care less about cost, the government is paying for it.

Also, you asked for constraints: 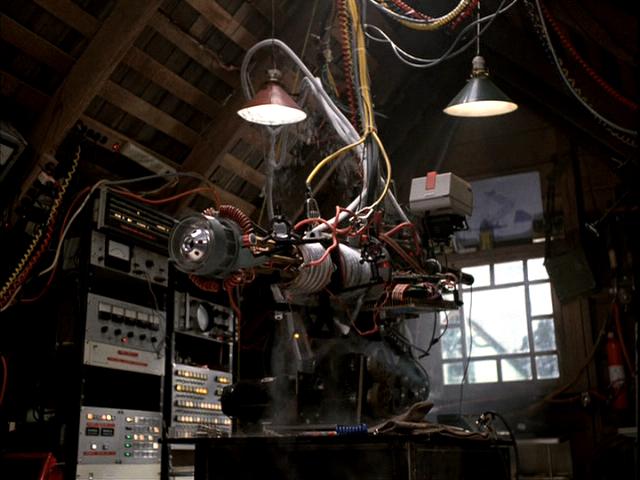 Because of a group of questions by Nosajimiki:

If you're trying to minimize the fantastic elements, it's helpful to look at why shrink rays don't work. Let's examine the brain. Say it shrinks but remains the same mass. Then it is under extreme pressure which will destroy the structures of the brain. So that can't work. Now suppose it shrinks but doesn't maintain the same mass. Then a bunch of structures are lost, so that can't work. That leaves two possibilities:

The person is replaced by something that works at smaller scales

Maybe the beam is a brain scanner. The human is taken apart by the beam and the data is put into a tiny robot, which either has an extremely efficient brain, or is operated wirelessly from a data center.

Say you don't care about it being possible. We need people to lose mass without losing particles. The Higgs field has to do with giving particles mass. So let's say the beam blasts away Higgs bosons, which lowers particle mass. Then particles have less energy so other forces pull them closer together. Since we don't want the beam to fry the person, we'll say it's made of neutrinos which barely interact with matter (I don't think neutrinos really interact with Higgs bosons either, but this is soft sci-fi).

If you're not writing hard SciFi, then maybe technobabble would fit better. There are a couple ways I can think of.

You could use the Quantum Dimensional Diffuser(R). This universe breaking technology projects any object in this dimension and spreads it across a controllable number of otherwise non-intersecting parallel dimensions. The probability function for detecting any individual particle is spread across other dimensions. The interactions with particles in this dimension are reduced, and all fundamental forces are scaled by the probability function spread.

Users are cautioned that interactions with particles in other universes may adversely effect condensation of the probability function within this universe.

An atom is pretty much made of empty space: the distance between the nucleus and the lowest energy orbital is several order of magnitudes larger than the dimension of the nucleus.

For a real life scale comparison, if the Bohr radius was the same size as the Indianapolis motor Speedway, the nucleus would be a grain of sand 0.1 mm placed in the center of it.

The dimension of matter is dictated by the distance between the electron clouds, so if your ray somehow manages, thanks to generous amount of handwavium, to reduce that distance, it can actually shrink matter.

The shrunken person is a transporter duplicate

The idea of a standard star-trek style transporter is that your scan a person, destroy them, and then make a copy of them somewhere else creating the illusion of light speed travel... but this is not the only way such a technology could be used. Once you have saved a person's pattern, you can then choose to edit it before re-assembly. You can not make the molecules smaller, but you can re-arrange them to make fewer and smaller cells. Humans are made of predictable patterns of cells. But other mammals exist that have all the same organs we do, only smaller; so, by editing away most of our redundant tissues you could make humans way smaller... maybe not 2-3 inches smaller, but something in the rat-to-house cat size seems pretty achievable.

The biggest constraint is going to be making the brain smaller. Other animals have way smaller brains than humans for how smart they are, so there is certainly room to shrink a brain, but not to any arbitrarily small size without a significant overhaul of how brains work.

So the shrink ray is basically the transporter with an AI integrated with the pattern buffer that is designed to minify the design of what ever it scans before "printing" it.

In a muonic atom, the muon is like an electron, but more massive, which means it 'orbits' at 1/200 the radius an electron would. In theory you could put together mini molecules this way and have a tiny, tiny person or other object. Small problem: muons decay after just 1.5 microseconds, so you have to be very fast with your chemistry set.

Now let's suppose a moment that someone makes an Honest-To-God physics breakthrough, and can manipulate the fundamental forces that determine how heavy a lepton is. Just as the electromagnetic and weak magnetic forces were thought to be different until a way was uncovered to consider them as one, perhaps you can figure out a way that you can "tune" a lepton to any point between being an electron or a muon. You are able in this way to broadcast some hitherto-unknown particle (the 'shrinkon') into the region of space where a person is, and their electrons nearby become a little muon-ish and so they get smaller, but not so muon-ish as to begin decaying rapidly.

Now in all odds the only way to do this even if it can be done is to vaporize the person into a chamber hotter than the core of the hottest star (since this doesn't seem to have made itself known in stellar evolution), but the point is, we don't know that has to be true. Maybe there's a simple trick, just waiting to be worked out!

The shrinkons have to be something that have escaped the attention of every particle physicist - how I don't know, but I assume they're really heavy. Probably they should decay instantly, but let's suppose they take a while, and you can just blast them into a person with a particle accelerator, and then they emit some kind of gauge field that alters leptonic number around them in the body. Do it fairly uniformly and you have a mini-person, with the same nuclear weight, and we are not going so far into muonic character that the electrons have a significant weight, so to three or four places their mass is unchanged.

Note that the mini person will shrink things on contact, because they are emitting this hypothetical field. However, if we suppose it takes many, many particles embedded in the person, the field may project only a fraction of a millimeter. It can't be much less than that, because the epithelium of the skin is always regenerating from scratch, and without particles embedded in it your subject would quickly get full thickness skin, which would look odd, and the topology issues confuse me. But if they drink a glass of water, the water molecules approaching their intestinal lining shrink to match the rest of their body, and are absorbed like they would be in a full size person. Eating works the same way. Nonetheless, you have the formidable issue that the food contents of their intestine receive much less shrinkage if the range is short. But the more they are shrunk, the less the range needs to be ... I think this is a practical problem but perhaps manageable. They certainly feel like they have to eat and excrete a large volume (relative to their shrunken body); their intestines can do the biochemical work quickly but the physical bulk of the material is an issue. You can tune that down if you accept that they shrink your hand while they grab hold of it, and then it expands to full size. I feel like the geometry should get "altered" during this process depending on exactly how they approach, so that ought to be painful.

I have no idea at all about whether semi-muonic matter would absorb light at a wavelength proportional to its size, or whether their increase in mass compensates for that, or whether the light entering would be shrunk like eaten food. You could say they are blind to all but UV light if you want, but there's about as much case to be made for them seeing normally.

Not the answer you're looking for? Browse other questions tagged reality-check technology physics .

16
How believable are "X-ray sights"?
6
What limitations can I put on wings for more tense/risky action scenes?
5
How might a scaling "force field" work?
4
Would this drone structure work?
3
How could a portable handheld weather machine work?
2
Could a photon with negative, dark, or anti energy be used to create a freeze ray?
1
Playing nicely with a solar death ray