How can the number of inconsistencies within a universe increase with successive patches?

Gods are all powerful beings who are eternal and have existed within the past, present, and future of a universe's timeline. However, every god also had a beginning. These beings were once mortals who gained tremendous power and ascended to the astral plane, the realm parallel to the mortal world. Through this method, a time loop was created, in which a deity has always and will always exist, yet was created at a certain point in time. Whenever a new god is created, the universe molds itself around the new deity's history, adding it to the timeline. This event alters other events in small and major ways, as the timeline accomodates the new entry into the pantheon. This is known as a retcon, in which a world rewrites itself to change a backstory to create a new canon. The mortal world can then be said to be an evolving universe, with it adding successive "patches" to the original to create a more perfect version of itself, similar to a software company releasing updates to fix errors and bugs to a released product. However, problems arrive with each new upgrade, and has led to numerous inconsistencies which a minority of people have realized.

With every retcon comes certain hangovers from the old timeline. Certain people continue to remember the previous revision, basically waking up to a world that has completely changed and that they don't recognize. Other individuals have two sets of memories of the old and new, living with dual memories. Other errors are much larger. A retcon can even create two different versions of the same thing, such as individuals or even nations. Entire countries left over from the old revision end up living alongside their new counterparts, each remembering different pasts and leading to mass confusion. This has sowed chaos in many parts of the universe, as individuals struggle to reconcile the fact that reality has changed, sometimes in drastic ways (ex. An America that remained subjects to Britain living next to the U.S.A.). The number of these errors are tiny, but grow with each new revision. Where they once appeared at only .001% of the time, the number has been steadily rising with each new retcon. Today it occurs at .1%, and continues to go up with presumably no end. Eventually this will cause some major issues for the universe on a grand scale.

How can each successive upgrade to the original universe lead to increasing number of errors?

Compounding Errors and the Pantheon of 100 Gods. 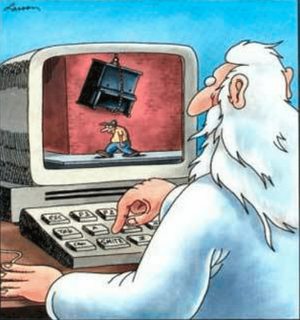 Each error takes the form of an inconsistency between two things. For example after the first patch, there was the following inconsistency between Albert and Brenda: Albert remembers being married to Brenda. He lives in a house with a king sized bed and photos of them together on their honeymoon. On the other hand Brenda remembers being single. She lives in a one bedroom apartment in the centre of town with her pet parrot.

On the third patch there are three inconsistent people. Everything is compared to the three people and there are now more possibilities for something to go wrong.

Then we should expect two new inconsistent things after the second patch since we compare each of a million or so things to each of Albert and Brenda.

The number of inconsistencies doubles with each patch.

Picture by Gary Larson of The Far Side.

...I wrote this thing before I read the question more carefully and saw that the deities aren't personally writing the universe, but the universe is automatically changing to their very presence (yet still with the intent to become more perfect, apparently). So this answer may not work for you at all. Have it anyway, it might spark ideas.

New patches add new bugs because patches tend to do more than fix bugs. If not kept in check by a good Product Owner, many developers will solve things with a broader definition of fixing than the actual issue, and expand the feature set in the process - increasing the risk of bugs popping up.

Earth 4.3.52421 was a fair product, the last 'good version' according to trans-universal reviews. There were some minor hijinks with Norway's coastline though; different people had contributed different parts to it and thus we got soft sandy beaches in Tromsø next to razor-sharp cliffsides in Lyngseidet. It worked, kinda, but the next Tiber Septim thought that it could be better. He invented a new, elegant system to create intricate coastlines, complicated as fractals but with realistic yet alluring results. After thorough testing, Fjord.dll was added to Earth.sln, compiled, and the place was hauntingly beautiful.

Other developers take note, and they use Fjord.dll in many other parts of the planet. The original developer has since moved on to different tasks. So we get fjords in Newfoundland! Antarctica! And then someone with a really creative mindset decides that Senegal needs them as well, and why not Cameroon and Peru? Fjords were never intended for warm climates, but this dev doesn't consider that. He just codes in the required glaciers so the IDE stops complaining. So, the next edition of Earth has one bug fixed (slightly wonky Norway coasts) and a couple big fresh issues with African and South American geography. That's feature bloat; Fjords were never supposed to be a thing in the first place.

Human programmers - and presumably universe-writing gods - are creative people. We will do more than is required, we will find ways to be extra elegant at the cost of efficiency and correctness. And the tasks that have no creative side to them at all, that are just boring drudge work like universalising capitalisation logic across 900 unit test files... well, we don't exactly jump at the occasion. There is always going to be other things to do, perhaps even tasks with higher priority. So we do those things first, and the backlog of issues gets bigger and bigger. That's technical debt.

You say people have been remembering earlier geopolitical versions? Well, isn't memory allocation one part of programming that's both poorly understood by those who have not taken a weeks-long deep dive into it and only worked on higher-level features; and easy to mess up with unpredictable results.

This SMBC is also quite illustrative.

The cause is ultimately a lack of centralised project management. We may complain about managers but they keep us in check. Maybe what your meta-universe needs is a new version, one where the gods are organised.

9
How can a species of natural time-travelers have a meaningful society?
24
How can God warn people of the upcoming rapture without disrupting society?
9
How can a super consciousness contend with the erasure of a soul?
8
How can an emerging collective consciousness avoid mental instability among its individual members?
2
How can the survival of mortal vessels decline with an increase in quality of life?
4
How can a transitory deity be put on equal footing with other members of a pantheon?
6
How can controlling the flow of time prevent you from altering history?
3
How could a time paradox caused by a manufactured deity fail to produce a full retcon of history?
4
How can telepathic communication work across different time periods?