Suppose superintelligent AI is possible. Is there any reason its code couldn't be executed by stone-age people rather than a computer? E.g., imagine an order of monks reading and executing commands in a structured way.

This version of AI would obviously be much slower than one run on a computer, but conceptually I can't see why it wouldn't work. Let's leave aside the question of how such a thing would be created.

Best case: code was written by aliens with efficient implementation of thinking algorithms, so there is no need to simulate details of brain chemestry and allow emergent behavior to work itself out.

Revisit this answer for details. Take the specs as:

If you already knew how the brain worked to produce intelligence, writing that program fairly directly would require 1015 FLOPS (Blue Gene/P circa 2007) and 100 Terabytes.

Suppose the smallest item that can be manipulated is the size of a dime. They can be laid out in trays or stacked compactly in rolls if you are careful.

If each dime stores a byte, you normally move them around in bulk and don’t examine the detailed value. But it has a 4×4 grid of dots on each side, or a written hex digit, on each side. Math work could be done on expanded registers (like an abacus?) But main storage is this size.

Each byte is 2½ grams and 500 cubic millimeters. Multiplying out, it totals 50 million cubic meters and 250 billion kilograms. The mass is possible physically, and the size would be 20 of the Great Pyramid of Giza. That’s just the size of the bytes, and warehouses to allow storage and access would be significantly larger.

Copying a block of memory would be the labor (time and logistics) of finding a palette of goods in a warehouse and moving it to another, in a large city. The storage would be over many miles.

I don't think floating-point is that important, and can be a refinement of the abacus technique. A skilled operator using abacus or mental work is limited by how fast he can accept directions. As a bound, let’s over-estimate and say he can do 10 operations per second on bytes, reading the opcodes as distinct pictograms and whizzing through the steps. I think finding the argument values to work with will be a bottleneck. One instruction would need to operate on values large enough to store addresses and reasonable signifacance of quantities, but to get an undisputed lower bound let’s suppose it’s possible with stone-tech and human effort, 10 instructions per second.

A million people in a concentrated area is Ancient Rome, not stone age. Say 50,000 dedicated people (more like the pyramid builders) plus the urban infrastructure to feed them. Working 8-hour days, it would take 180 years to compute 1 second of AI program.

As noted, the logistics of bringing the right data and instructions to them would be worse. But you have caching levels, and multiple threads, and designs more suited to the architecture.

Before the AI could think, “um…” the same effort could invent a modern society and build semiconductors.

Absolutely they could though it would be too slow to be worth it. That's the beauty of a Turing Machine. The results are the same no matter the underlying hardware. While this super advanced AI may need some kind of gel based computation machine in order to work (a la Ex Machina), as long as that gel can emulate a Turing Machine, that code will absolutely work on monk-powered hardware using stones for bits. 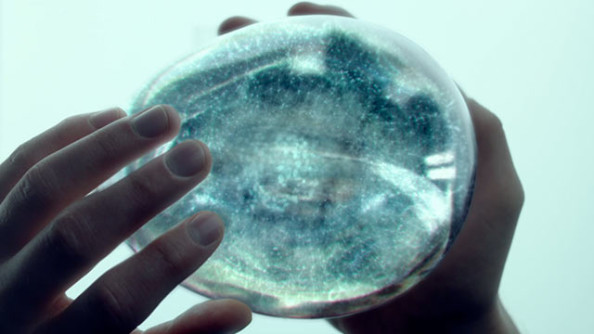 Well it's a good job this is the stone age. There will be plenty of stones around. These will be used for your computer's memory. Draw boxes in the dirt and the presence or absence of a stone in the box represents a binary digit.

Don't restrict yourself to monks. If you do, the calculations will take forever. Maybe have an annual pilgrimage. All the followers of the religion turn up en masse and act as various components of the computer. If there are enough followers they can multi-process. The monks orchestrate the whole thing. They also provide input and read the output.

Oh - I've just noticed this from Dan Smolinske's comment. That about wraps the whole thing up.

I think this idea has a lot of potential. I picture thousands of monks, scattered across the world, each performing some small task on papyrus or animal skins. Computing esoteric formula on complicated instruments. Some of them are travelers, bringing the work of their conclave to the next monastery so that the results can combined and the work continue. Each century all the results must be compiled, and interpreted by the leaders of this cult and the information acted upon. Kings may be made or fall based on the output. Entire civilizations may be reorganized. New ideas brought to light. Who knows!

If the scale discussed above by JDługosz frightens consider this idea: What if it's not a super intelligent AI? What if it's just an obscure algorithm that the monks believe tells the people what to do or answers the questions of the universe? Maybe it's no more then a very complicated transfer function that takes 100 monks a couple years to solve for a set of inputs. But if the people of this world have absolute faith in the algorithm, it could have very interesting results.

Not the answer you're looking for? Browse other questions tagged science-based artificial-intelligence intelligence or ask your own question.

44
How powerful of a computer do I need to simulate and emulate a human brain?

32
How much memory is needed to record a human thought?
2
What would a Hyperintelligent person look like out of the Information Age?
18
Can a civilization be reduced to the Stone age by a conventional war?
1
How would a species turn its skin to stone?
2
New Age Armor Materials
9
Would this “self driving” car work?
7
Bronze Age Underwater Civilization
12
The Sword in the Stone
8
Can transistors be made in the stone age? (Spoiler: Dr.Stone)