What negative effects would stem from a world having many inland seas rather than large connected oceans?

My fantasy world Treyidal is a planet inhabited by two races, humans and merfolk. They live on a very seismically active world, with such things as micro-magic based earth quakes.

For the moment we'll put all that aside, and just look at one aspect of the world.

If viewed from space, Treyidal has the peculiar feature of looking like tidal pools almost, being composed more of inland seas than large oceans. A number of these seas need to be more shallow than oceans on Earth, to facilitate a comfortable habitat for the merfolk.

So what negative effects would result from these shallower smaller seas?

I think that lack of broader ocean currents would be very tough on all of this world, lacking the ability to spread things like warmer water to farther north climates. Also, erosion would've probably made the oceans larger over time anyway, wouldn't it have?

All this aside, here is a very, very rough map of what I've thought about so far with my world. You can see that the prominent body of water in the center, the Aliya sea, is not necessarily required to be a true inland sea, though I do want a good amount of these. Basically, I don't want a world where continents appear to float on the ocean, but more like the water is penned in by the continents. 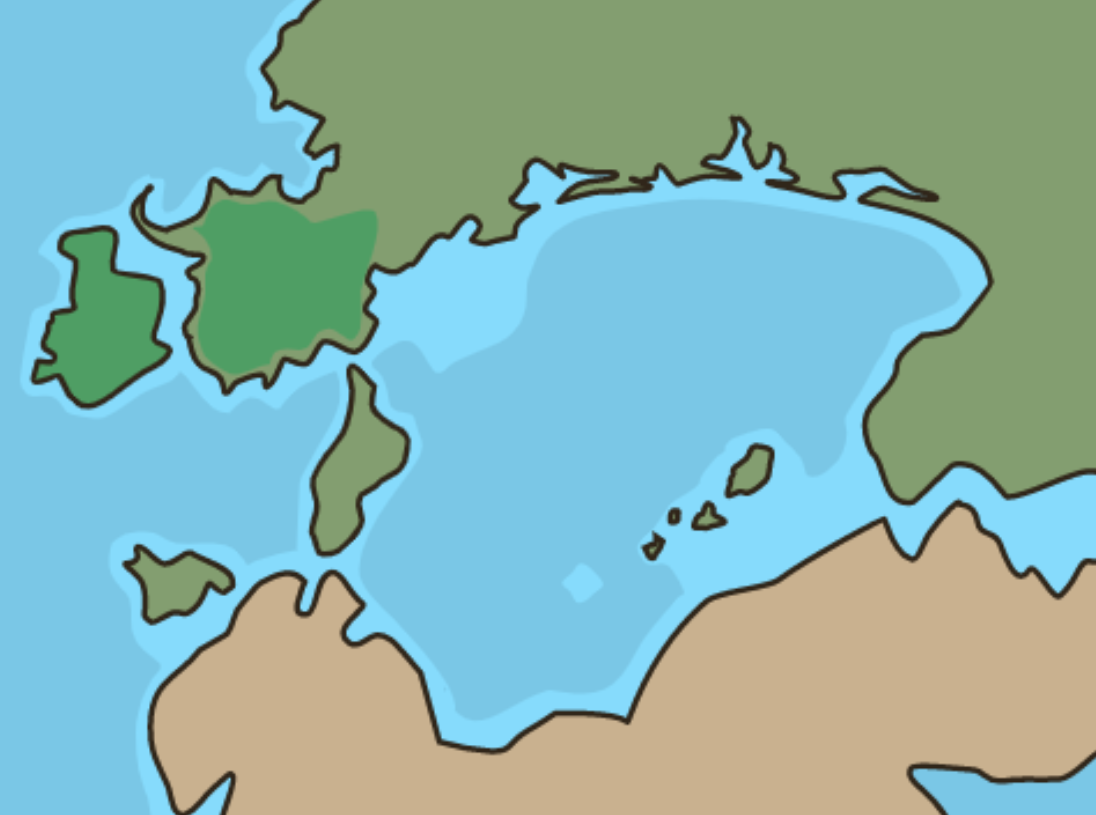 Well, a few things to consider that may or may not be inconsequential, or may even be nice extra flavor for your world!
Please keep in mind that I'm simplifying matters greatly so this answer isn't pages long.

Oceans as a Buffer

One of the most overlooked effects of massive and deep bodies of liquid is the equally massive and deep volume of dissolved gasses and stored heat. Near the coast, air temperatures are generally far more stable due to the huge heat capacity of water. Even well into the next season, the oceans usually lag behind in temperature keeping air temps more stable not only over the course of seasons, but days as well. Take deserts for example, which due to the lack of airborne water can vary from freezing to dangerously hot over the course of a single day.
Temperature isn't the only thing regulated by the oceans, gasses are also kept in check. On our planet, 2.4 gigatons of carbon dioxide are absorbed by the oceans each year, putting a noticeable damper on rapid changes in the makeup of the atmosphere for any gas that's dissolvable in water. This can have more profound effects during extinction level events, although I'm not sure that that will be relevant in your story...

With less surface water, your planet is actually less likely to experience ice ages due to the water-ice-albedo feedback loop being much harder to perpetuate. This could play an important role in some evolutionary paths.

Unfortunately, you planet would realistically be covered by vast swaths of desert. Desert formation has very little to do with temperature, and everything to do with weather patterns. If there are no wind patterns that will carry warm, wet air from an ocean all the way to the center of your continent, you're going to have barren areas at best, and massive deserts at worst. This is hard to circumnavigate, as precipitation generally comes from the evaporation off of large bodies of water, and fewer, shallower oceans means less evaporated water, smaller rain clouds that won't make it as far inland, and consequently more barren landscape.

A lack of large fish. This may be good or bad; you are unlikely to evolve whales or sharks in a lake; the food supply would not support it. I don't know if your merfolk depend on large game.

Variability in water level might be an issue; we have had pretty large inland lakes drop 20 feet in a drought, or nearly disappear altogether.

For freshwater lakes, freezing over might be an issue.

Tides may be extremely muted; some marine species rely heavily upon tides, they agitate the water and stir up nutrients, or bring new nutrients to the beaches. A lack of tides may mean a lack of beaches as an environment for some marine animals.

No mountains. On Earth, the ocean floors are important parts of the moving of continents. All the subduction zones are where the deep ocean floors are going under the continents both moving continents and creating mountain chains. Without the Andes mountains, South America will have very different climate. If the land masses don't move around, then you will see very strong differences in animals based on latitude.

Where the world active enough that the location/composition of those seas change "geologically" often, It seems to me that the human folk may have histories of, or still be nomadic or partially nomadic, depending again of how fast it changes, can you build a structure that will last more the a decade? a century? a millennium?... what affect does that have on history... Maybe there are a few or one relatively stable enough area that a city could be build. this could be a considerable power imbalance to the ones that cannot build lasting settlements.

Similar for the Merfolk. How "corrosive" are the seas? could a stable settlement be built on the seaflor or suspended in the water? if the topography changes often enough, perhaps because of the isolation of the seas there is more diversity of language & culture... maybe even divergent or specialized physiological adaptations.

The world it self wold be more dry, warmer, similar likely to the Iberian region of Europe or the Anatolia region of Asia

Not the answer you're looking for? Browse other questions tagged internal-consistency ocean water-bodies currents .

6
What percentage by mass of the earth's surface is water?
25
What if the seas had fresh water in them?
7
Pangaea-like supercontinent - could it have a temperate climate if it has large seas inside?
14
Towers in the ocean; How deep can they be built?
3
What would the currents of an ocean world with no continents look like?
6
Reef World 4 - Flora
4
How much can the shape of the oceans affect the tides (on my earth-like planet)?
1
Does this world sound realistic? (more tectonic activity)
4
Scuba diving in the Permian Seas - effects on pre-dive calculus and commercial diving
2
How would geothermal heating affect ocean currents on a rogue planet?