Consequences or Benefits of a Binary Planet?

I'm curious to the affect a planet would have if it orbited around, or was orbited by another planet of equal, slightly larger mass. Say if Earth had, not the moon, but a planetary object the same size as the Earth. What would life be like on the planet? How would time be affected? Could life be sustained?

It seems that binary planets are possible.

What are the consequences? Firstly, the planets will be tidally locked, this is pretty much inevitable. If they are far enough apart to not get tidally locked, they are far enough apart to not actually orbit each other. I suppose in a system with no other inner planets it might be possible for the binary planets to orbit each other at a great distance, and both rotate independently - in this scenario they would both still suffer significant tidal effects. But the tidally locked scenario sounds most likely, and more interesting, because it puts the planets closer together.

So being tidally locked, they always show the same face to each other. If there are creatures on a planet, they don't know what the far side of the other planet looks like.

Being tidally locked, their day is equal to their orbital period (more or less). If their orbital period is more than a week or so, very long days and nights will start to be a big problem - perhaps not insurmountable for life, but I think for intelligent life it's good to bet on a day of not more than a week. But I'll go with a orbital period of 1 day, in other words the two planets are about a distance of an Earthly geosynchronous orbit. Earth has a diameter of 12,000km and Geosynchronous orbit is 42,000km. This means looking at the system from above, it looks like this - the image is to scale: 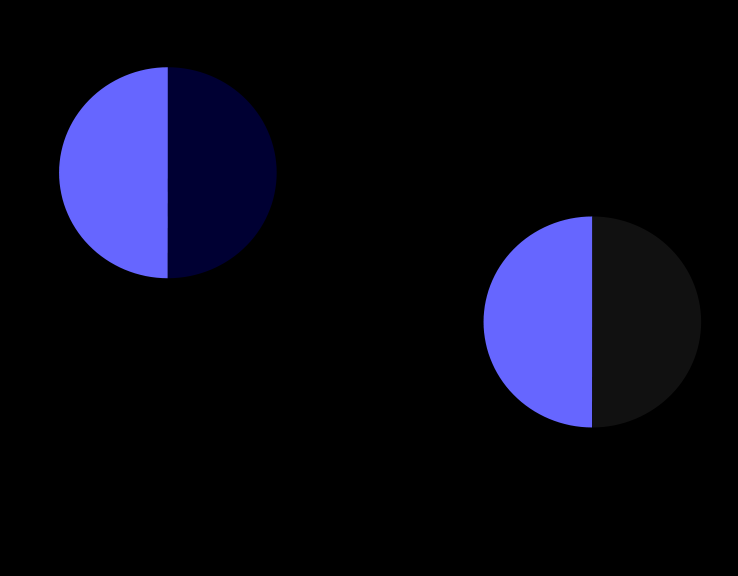 At this distance, the planets are extremely large in each other's skies. In fact, about 300x larger than the Moon, because brightness is proportional to area, a "full planet" is thus 90,000 times brighter than a full moon on Earth, potentially up to about 8% the brightness of the Sun.

In the above image, you can see the day and night side. One of the planets has a "planet lit" night, the other planet is having a dark night.

Solar and "lunar" eclipses will occur once on each planet per orbital period (this does depend on the exact orbital geometry, but we'll go with the system being perfectly aligned). One of the curious things is, because of being tidally locked, people on the "far side" of the planet, will actually never see their sister planet. They will thus also never enjoy a planet lit night or an eclipse. If the planets are mostly water, with continents, then a civilization on a far side continent might not even know or believe in the existence of the sister planet or it may have a mythical status. On Earth, the Moon features prominently in certain mythologies, and so the far side and near side will be in a way quite different worlds, with different mythologies.

A near siders day

A near sider would not enjoy a clear-cut day/night cycle, they would instead essentially experience two nights - a short dark one at Noon of about 1 hour, and a long bright one after the sun has set, with a period of extra dark at midnight.

In contrast, a far-sider will experience a day night cycle a lot like on Earth, except without a moon. This will give near siders and far siders very different world views. When near siders travel to the far side, the far siders will think they are bonkers, with whacky religious beliefs and all this talk of "little nights" and such. A far sider who travels to the near side, will have their mind blown.

If one of the planets has an entirely watery near side, with continents only existing on the far side, then that planet may be entirely oblivious of the sister planet. However in the scientific era, even far side scientists will be able to recognize that their planets motion is odd, and so be able to deduce the existence of the sister world, even without sending a ship to see it.

The two planets could transfer life on rocks thrown up by large impacts. Bacterial life, spores, seeds and possibly creatures like tardigrades could be transferred this way. This could, up to a very limited point, keep the development of life on both planets in sync. The limit is that any creature more advanced than a tardigrade is unlikely to make the trip. This means that both planets will probably develop the same kind of atmosphere, and compatible flora and fauna. But unless there is some kind of extraterrestrial seeding of higher life forms (by aliens, or some kind of directed evolution by intelligent spiritual beings) then there is no physical/biological mechanism to synchronize the evolution of intelligent life.

Because the two planets are at geosynchronous distance, communication by radio will not be difficult. Unfortunately going with a Darwinian evolution model there is little scope for "first contact" occurring in such a manner. If however the world has "directed evolution" then this could occur, as both civilizations more or less simultaneously discover telescopes and radio.

Space flight between the two planets will be relatively easy for one way trips. Thanks to areobraking it would be easier to send humans to the other planet than it was to send humans to the Moon, but it would be much harder to perform a return trip due to the requirement to send a rocket large enough to lift out of the gravity well and atmosphere of the other planet. In fact with apollo level technology a return trip would simply be impossible. With a level of technology enabling colonization of Mars (i.e. 2020 technology) then a return trip would be possible, by exploiting resources in-situ to fuel a return rocket - but the trip would still be very difficult.

If only one of the planets has a intelligent life, it would be relatively easy to colonize the other planet, requiring only Apollo level tech. This is assuming that the two planets have shared life via meteorites, so the other planet has an abundance of edible (and naive) life, the animal life could be quite different to that of the home planet, but should still be edible thanks to the common genetics. Colonists might have to be trained as survivalists, but should survive without technology. It would take a while to build up to a space industry on the other planet, but it would be much, much easier than doing so on Mars (except perhaps, for the lack of motivation).

If both planets evolved advanced civilizations, or after one planet has colonized the other, then two way trips would be possible by using the other planets rockets - however travel between the two planets would still be very, very expensive.

GPS satellites, communication satellites, and so on, should all be possible. They wouldn't tend to orbit exactly as they do on Earth, and instead would tend to exploit libration points where the gravity of the two planets are balanced. Note that for near siders, radio transmissions could be send directly from the other planet as they are tidally locked. These would not however enjoy the clear vacuum of space, permanent sunlight and so on, but could still be done with apollo level tech.

Because the two planets are tidally locked, it would be possible to build a space elevator bridging them with no more or even less difficulty than building a space elevator on Earth. This may be most useful for delivering stuff to the "L1" point between the two planets as it would still be a very expensive means of travel and unlikely to be economical for trade or tourism, except in the case of the super-wealthy.

If both planets are identical in size/mass I don't believe such a system would be stable for long (as measured in terms of stellar evolution).

Firstly since both worlds are supposed to have developed Earth like ecology's and life forms must be orbiting a star within the Goldilocks zone. So its a three body problem not a 2 body problem.

The setup also means both worlds are going to be varying the distance between themselves and their primary each time they complete an orbit around their common center of gravity. And they cant be in a tight orbit (think a few thousand K apart) either. The laws of gravity and motion dictate a pretty wide distance between them. (Greater than that separating Earth and the Moon by an order of magnitude or more).

So the climatic impacts are going to be dramatic. If it takes 10 days for them to complete one orbit of each other they are going to experience mini summers and winters as they approach and then recede from their star. And this is on top of normal seasonal variations as they complete their annual cycle around the star like all its other planets.

What you could just as easily do is put both planets in the same general orbit on opposite sides of the star. Using Apollo level technology launches to Mars or Venus were 'doable' if extremely difficult. The problem is in real life the payoff for trying it has never been worth the risk. That would change immediately if the other planet had a earth like atmosphere and ecology.

Not the answer you're looking for? Browse other questions tagged planets .

6
Where to live on a binary planet?
7
Making a Counter-Earth

5
Two new planets orbiting the Sun beyond Pluto
7
Double Planet In A Wide Binary Star System
13
Could two stars of equivalent mass/size form a binary system and be different colors?
7
Radiation from binary star systems and how that would affect a planet orbiting both stars
0
Earth-like planet the size of Callisto with Io-like moon. Plausible?
23
Could Earth and the Moon be the same size?
14
Are trojan planets possible? Are habitable trojan planets possible?
11
What factors affect how many moons a planet can have?
3
Is my binary planet realistic?
8
Can I reasonably give a binary/double planet a strong magnetic field?