How Big Can An Ancient Bird Powered Glider Get?

What are the practical limitations of a glider made of bronze age materials and pulled by well trained birds?

Due to psychics able to control animals, and a cultural fixation with domestication, nearly every animal of any potential use (even just as a status symbol for psychics) was domesticated hundreds of millennia ago in this timeline.

You can draw from any animals living in the past ~400k years in your answer, notably including: Haast's eagle and various massive Teratornithidae birds (but excluding the heaviest ever flying bird Argentavis because it lived millions of years ago).
Given both the limited fossil record for the largest birds and selective breeding you have some flexibility in terms of exact wingspan and wing shape.

The aircraft can be directed by ~3ft, ~40lb hominids and/or extremely well trained crows bred for incredible endurance, memory and diligence (with the latter being much cheaper).

Given only natural materials (which includes cheap spider silk) seem viable here, how much could such an aircraft possibly carry?
Will air travel be limited to the tiny halflings for a very long time, or is carrying a human totally feasible?

Remember the birds can hold on to the aircraft with their wings extended even when not flapping so one must factor this into surface area.

If your answer is contingent on the use of long lines/tethers connected to or held by birds: Please consider how tangles are avoided when dealing with turbulence, as whether the aircraft crashes whenever it encounters a strong wind is an important consideration.

Part of series with: Just How Omnipresent Would Cheap Cross Laminated Spider Silk Be?
How much would this alien parasite increase crop yields? What Bronze Age Jobs Couldn't be Replaced by Extremely Well Trained Animals?

If we consider the extant birds known to carry large weights, it would appear that the bird species known to carry the largest weight is the bald eagle, which has been confirmed to be able to carry 15lb. It has a wingspan of up to 2.3m, and a beak to tail length of up to 1m. For purposes of this answer, let us suppose that the birds we will use can carry up to 10lb, or 4.5kg. This lighter load will give the birds a considerably greater endurance than if they were required to carry up to their full capacity.

Now, if we consider the lightest wing structure, this would be a parafoil, a structure made from cloth which uses airflow to inflate it and make it behave as if it is effectively rigid. Having done some research on paragliders, gliders capable of carrying a human being that employ parafoils as lifting surfaces, a modern paraglider that is able to lift a recommended weight of 112-128kg weighs a mere 5.65kg, though that is using modern fabrics. We could double that for old-fashioned fabrics, to 11kg. Such a paraglider has an effective span (width) of about 10m, a chord (maximum length) of 2.83m, and a lifting area of 24.31m^2.

We could harness trained bald eagles to this canopy by harnesses (reducing the strain on their talons) on lines a few metres long, so we'd get about five eagles across the canopy along the forward/aft centreline, and another four on the forward and aft edges, for 13 eagles total.

13 eagles could dead-lift about 59kg at 2/3 loading, or 88kg at full loading. That's not enough to lift a human (and all the gear) outright, but they would very easily lift the canopy, and with a decent run-up from a human passenger, could likely produce enough pulling power to allow the assembly to stay aloft indefinitely... certainly for as long as the eagles could fly. That's also not counting the ability of a parafoil to catch thermals.

Given the lift to weigh ratio of a parafoil, it would be reasonable to say that as large a load as could be lifted by an appropriately sized paraglider could be hauled by a sufficiently large crew of eagles for most of a day, provided that it was equipped with legs or wheels, and perhaps a ground crew to push it.

With a really huge canopy, a horde of trained eagles, and a load on greased wheels with some people to push-start the thing... you might be able to lift up to a metric ton. The limit is really going to be how big a canopy you can make, and whether you can get the payload moving on the ground in order for the canopy to start generating lift.

A modern recreational glider has a glide ratio of over 9:1, meaning that it falls 1m for every 9m it flies. An ancient glider should be able to achieve 8:1. This also means that the eagles powering this assembly need only be able to lift 1/8th or more of the total assembly's weight in order to achieve level flight. As 13 eagles can reasonably lift 59kg, and the ideal load of the parafoil is up to 128kg, about 2.2 times that of the eagles lifting capacity, this means that these eagles should be able to achieve a decent climb rate in the absence of thermals.

The key is mind-controlling spiders.

You can carry whatever you like if you distribute the weight among enough birds, and how far you can fly depends on how well you swap them out for birds who aren't tired. The limiting factor is the weight of the lines attaching birds to your glider. Once the line weighs more than the bird can carry, it's useless.

So, spider-silk. 0.06g/m for a line capable of holding 500g, so a 1km rope will require 60g out of the 500. If each bird needs one square metre to fly in, you can have up to three million birds lifting over a tonne ... which is overkill for anyone but imperial rulers.

Typical weight for a fully-grown adult modern human varies regionally, but you're looking at 100 birds or more. This is one area where far-travelling teenaged characters might actually have a use, merely for being lighter - if they can wield the required psychic might to give directions to bred-and-trained birds.

Beyond that, your limiting factor is more in your aviaries and ability to feed the birds than in the glider, which will be as spindly as possible. In an area with strong thermals, some parachute-sails might be helpful for a more rigid aircraft.

I've rounded pessimistically for that upper-limit, but the drag on that many silk-lines will be substantial - it might be worth trading some weight for speed.

(Why don't we do this in our own world? Training spiders is incredibly fiddly.)

Q: nearly every animal of any potential use (even just as a status symbol for psychics) was domesticated hundreds of millennia ago in this timeline.

That's a lot of time to develop an interrelation.. suppose

Animals are prepared to cooperate for you

Consider the potential of using a flock of geese for your aircraft.

Men and geese have always been friends.. with below glider, give me 3 rows (27 geese), and the glider wouldn't need an engine. It could be carried by geese, from Norway to France.. and back 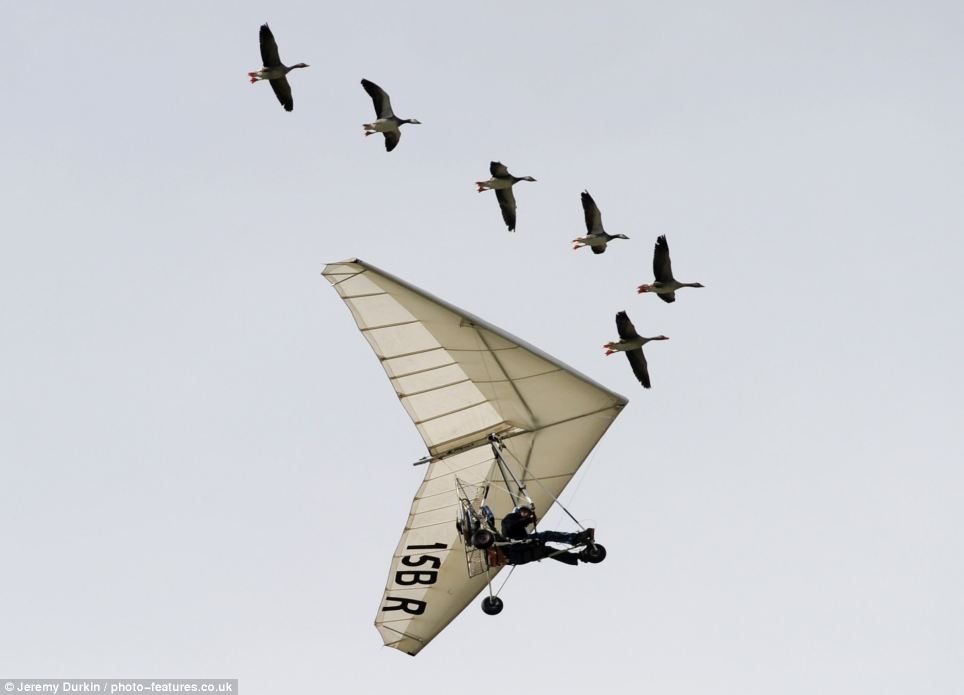 .. how many people would the glider carry, if it had 80 geese ? or 120 ? What chords to use.. or would the goose have special hooks for that purpose, sometimes they connect and drag the wing for a while, most times they don't need to ? how many people would fit.. I'm not an avionics expert, there may be certain limits to wingspan, but you could make this delta with sail cloth and wooden seats.

This can't be done with Bronze Age resources

Bridgekeeper: What... is the air-speed velocity of an unladen swallow?
King Arthur: What do you mean? An African or a European swallow?

It doesn't matter how many trained birds you have. The material weight available during the bronze age combined with its low tensile strength will always prohibit flight. Even using silk (which was available in the bronze age), the weight of the glider will be too heavy for any combination of birds to drag.

Worse, the more birds you have, the longer the ropes must be to attach the birds, adding weight and increasing the likelihood of breaking.

When you ask question #2 (what limitations) the answer is the materials won't sustain flight.

This is a good example of a question that isn't valuable to ask. Who cares if this can be done or not? Who cares what the limitations might be? Write the glider and those wonderful birds into your story and move on — the idea is cool! It has this fabulous Icarus feel to it that I like. Asking how to make it realistic actually ruins the mood.

3
Is it possible to create a small aircraft drawn by flying creatures?

6
How big can we make a telescope?
4
How to design a steam powered supersonic aircraft?
5
How fast could a bird-like human fly under optimal conditions?
6
How big can a giant get before losing human level intelligence?
9
What factors would limit the size of an ancient wagon and how big could they get?
10
How far would a goblin-powered plane go?
9
Can a "knockout bird" fly?
8
How would the anatomy of a bird that flies with its legs work?
7
What Bronze Age Jobs Couldn't be Replaced by Extremely Well Trained Animals?
8
How Tall Can Flightless Birds Plausibly Get?