I have some tribes of nomads that live in pretty harsh places, going around by carts or building shelter is usually not an option. They live and sleep in some kind of heavy primitive armor, I was thinking a mixture of bone/rock and matrix.

3 years ago when I was into calisthenics I followed this tutorial on how to make weighted vests with cement. Except I made mine with a sheet of cut marble not cement, since I had the tools to cut it but didn't have cement, marble was heavier anyway, which was a bonus, ended up weighing 11Kg or 24Lbs. The guy in the picture isn't me, it's the one from the tutorial. Mine looked exactly like his but blue. It was heavy enough to do exercises like sprints or rope climbing but stable enough to not get injured, it felt like wearing armor. 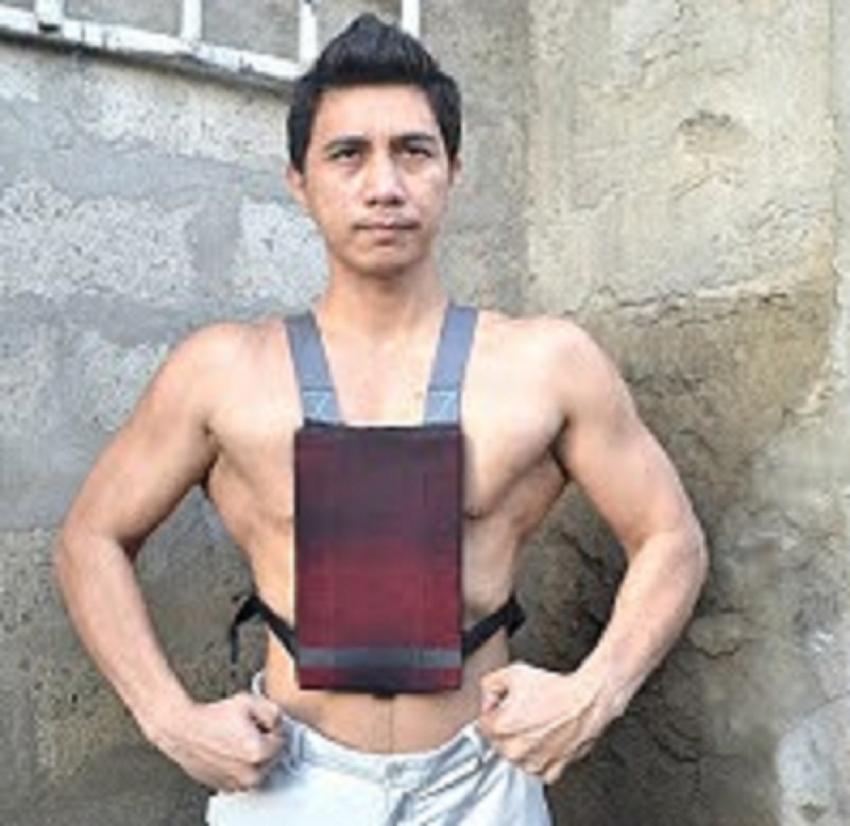 I want the nomads in my project to wear a similar kind of armor, but covering most of the body, it must be primitive and lacking in technology hence why this tutorial came to mind. It's not a question of strength or endurance as this is something that even in real life can reach unbelievable levels without using magic or science fiction, there's a guy on YouTube who does pull ups with 157Kg or 346Lbs extra on top of his bodyweight and men are known to run while dragging cars for competitions, so yeah normal humans are already powerfull enough to make fantasy unquestionable.

My question is how to maximize the comfort of the armor, for the nomads to need removing it the least amount of times possible in their life. A legend of golems and living armors must be created from their culture the same way centaurs were born from the Scythians always riding on horses. The armor must be incredibly primitive requiring only tools that can be found easily, like; raw cordage/ropes, rocks, wood, bone, pelts, and matrix done with handcrafted needles.

What qualifies as a good answer

Describing the armor and how would one make it as comfortable as possible whilst taking into account the life of wild nomads living on the edge of survivability.

The amror is protecting against:

-Creatures that can hurl spikies and other ranged projectiles

-Creatures that can pinch and break bones or skin with ease, imagine giant crab or scoprion like fauna

-Intense heat in the day and intense cold in the night

-Other big fauna that can easily break a person

No Armor is Perfect

Let's get this out there: no armor is perfect. There will be gaps and it will have to come off at some point as well as be maintained. Nevermind practical considerations like relieving oneself, nursing babies or taking care of children.

Such as that worn by Native Americans from the plains. Yes, this will need to be modified to handle the dangers of the environment, but it is a protective garment made of relatively simple materials. Preventing projectiles from slipping through the gaps may be an issue to address quickly, with either more bone or cloth holding bones together. It is relatively common to have a padded underlayer with the actual armor when over it (think arming jacket and plate).

Different bones (or chiton?) could effectively act like plates, allowing for this armor to provide better coverage. That is specific to setting, though, so I cannot go into detail. Just keep it as an option!

I would also recommend the use of spears and shields because they are such a good weapon combination and can be used to fend off many of the mentioned dangers and can be made easily.

Not the answer you're looking for? Browse other questions tagged survival alternate-worlds armors tribes nomads .

2
What Material Would A flexible Human Mech suit be reinforced with?
6
Could Human Civilization Survive Hypercanes?
41
How would a society isolated by monster attacks get food?
18
Armor for Giant Crabs to Defeat Explosive Bites from Predators
8
Hermit living down a well. How deep can he safely go?
3
Human-leather Armor: Effective and Practical?
3
How could human-like aliens survive on Pluto?
7
How can human and orcish tribes cooexist on the steppe?
11
Could a human survive a fall into water with exoskeleton armor?