How to heal a defective superhuman?

By modifying the human genome an organization in the future created a class of superhumans. Factors that would cause most hereditary diseases have been erased, and the ones in muscle mass, strength, endurance and regeneration increased.

Because they were created as soldiers they exhibit accelerated growth, looking about twenty-thirty years old although they barely reach the decade of life.

However, one of these superhumans was defective and his brain ages at a faster rate than most, presenting leukoaraiosis and the onset of Alzheimer's.

How could it be possible to heal it? Or at least extend their life years by preventing the brain from continuing to age.

Despite genetic modifications to strengthen the body, the brain of the superhumans is similar to the regular human. Their ability to learn, response time, and overall cognitive processes are the same as anyone else's, but due to genetic modifications it develops organically at a faster rate than normal, the same as the rest of the body. In the case of the defective individual, his brain ages at a faster rate than the rest of the body. Hence the problem.

You know how you changed the cells to make the supersoldier. You know what edits you introduced. It will be easy to identify what stretch of the gene is responsible because you put it there. Probably these super soldiers have many edits but you know that your "defective" is defective. As a matter of quality control if nothing else you should identify exactly how he is defective. Sequencing his genome should be no big deal for these biowizards. How does he differ from the typical supersoldier? What introduced gene has caused his problem?

Now hack that problem gene. There are various ways being looked at now - perhaps CRISPR.

The most versatile gene editing tool is called CRISPR. CRISPR is often preferred because it is inexpensive compared to other methods and is the easiest to customize -- that is, it is easy to specify which series of DNA letters CRISPR will search for in the genome.

The CRISPR gene editing tools include a “guide” that locates the mutated sequence in the CFTR gene, a template with the correct segment of DNA letters, and “scissors” that break the patient's DNA at the site of the mutation.

Once the tools enter the cell and reach the mutated sequence of DNA, the scissors snip out the mutation. This damage attracts the attention of the cell's DNA repair machinery, which will then use the template to fix the break in the DNA. This permanently corrects the mutation in that cell.

Perhaps you hack your edits with a neutrotropic retrovirus or transposon that integrates into the genome at the site of the responsible gene. Or maybe there are new methods in this future. A method used to correct an genetically inherited disease (like cystic fibrosis, above) could be used to correct your genetically diseased supersoldier.

Bear in mind that the aging changes in the brain might not be driven by the cells in the brain, but by another population of cells - in the liver or elsewhere. People do not know for sure what causes leukoaraiosis. Maybe his brain problem is caused by an accumulation of amyloid, like familial amyloidosis. These accumulations of stuff might be amenable to medical treatments to bind or break down or otherwise clear the built up substance. Maybe instead of blocking his aging you can use treatments your biowizards have devised for people who have aged.

Give the cells a sort of 'mRNA vaccine'.

The brain tends to have a fairly light immune response, because immune activity can damage it. As such, a lot of its protection relies on the blood brain barrier, and cell mediated immunity.

Cells have a method to remove the faulty proteins that cause alzheimers, autophagy, where they break down damaged proteins. In older people this process malfunctions.

As such, inject a load of mRNA into the brain targeted at the bad right handed tau and amyloid proteins.

Leukoraiosis happens because blood vessels are ruptured, blocked and damaged, glial cells overrespond, and damage to the brain happens.

As such, use your sci fi technology to replace them. with newer versions. This should give you a few more years of super soldiering before they fuck up these vessels.

One cause of Alzheimers is misfolded proteins -- for example Amyloid and Tau proteins. These guys are supposed to make up the physical part of the brain. But sometimes they are shaped wrong and just gum up the brain and stop it sending electrical signals properly. These deposits of bad proteins are called plaques.

The good news is you can just remove the plaques and the brain will go back to normal function. For that just tell your futuristic Holo-Doctor to engineer a selective amyloid inhibitor. 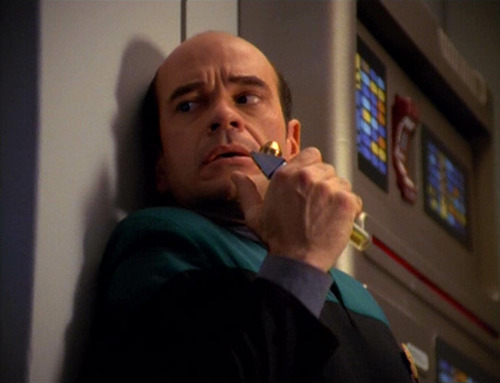 The hard part is designing the inhibitor to remove the plaques without damaging the correctly formed Amyloids. That's what makes the inhibitor selective. But Holo-Doc is up to the task. After all his holomatrix is programmed with the collective medical knowledge of all known sentient species; and he has quantum heuristic algorithms to devise new treatments.

And if that fails you can always fall back on reprogramming some of Seven's nanoprobes. 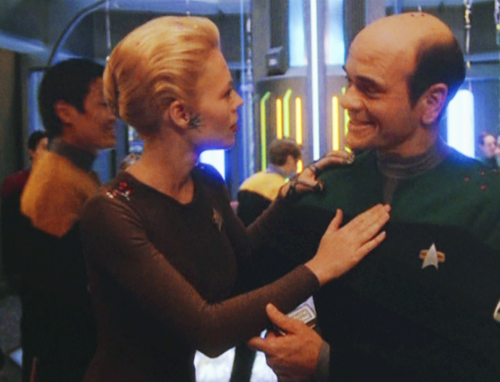 We are as one!

Note: The solution has nothing to do with the patient being a superhuman. The problem might come from their being superhuman though. They probably create all proteins faster and so create bad proteins faster too.

5
Nanobots Ecosystem, is it possible?
10
How do you find a mate when everyone looks amazing?
3
How to get clones to look identical to original?
7
What's the disease?
4
Psychological Development of Children and Adolescents Under Accelerated Time
3
living at mach 50
2
Is there a way to reduce one's processing speed and perception of time?
5
How could a living biological sword survive a spaceship crash and then isolation for millennia?