What natural defenses might an ecosystem evolve against dragons?

In a world in which dragons (as animals, minus magical associations) existed, what natural defense mechanisms might other animals or plants evolve in response? How would a creature as devastating like that affect their environment, and what could the rest of the biome do to keep from completely collapsing?

I'm especially interested in ways that other creatures could not only defend themselves from giant flying, fire-breathing reptiles, but also make use of and even exist symbiotically with them, in the same way that flowers use bees to pollenate, etc. Bonus points if these adaptations evolved alongside the development of dragons, rather than in response to the fully-formed appearance of them.

Well we already have plants and trees that need/use fire in order to germinate their seeds, These plants might have even hardier seeds needing a little extra help. Some grasses and smaller plants might have deeper and thicker root systems in order to sprout new shoots much faster after a pass.

Other plants might build up a larger resistance to fire. A fruiting tree might survive because the dragons like the fruit, so they burn trees and plants that might smoother it out, Maybe the nuts need fire to germinate. Or by eating the fruit the dragon spreads out the trees, like birds with berry seeds.

Animals, the ones that the dragon likes are really going to have to the ones that can reproduce fast enough to keep from being wiped out, this would be a double edged sword, the ones who reproduce the fastest are going to be the ones that survive and are available for the dragons to munch on. Anything that can't keep up will be wiped out.

Small animals might become 'groomers' of the dragon, like the lamprey is to sharks, cleaning the scales and removing ticks and other irritants.

Since Dragons will be the top predators, prey animals will evolve a fantastic array of defences to protect themselves and their offspring.

Rapid breeding like rabbits is a simple adaptation, and easily selected. Creatures who breed faster will have more offspring, hence the next generation will favour breeders.

The next common adaptation would be to herd in larger numbers, so it is harder for any individual to be taken down. Modern herd animals can herd in impressive numbers, and during the age of Dinosaurs the "duck billed" dinosaurs seem to have adopted this as well, as they had few or no defences against the predatory dinosaurs. Giant herds of zebras on the African savannahs are an example of this strategy.

Defensive herd behaviours can also be selected for. Modern animals like water buffalo, bison and musk ox have aggressive natures, formidable natural defences like horns and instinctively form defensive circles around the young and females when threatened. Since dragons are so much larger than wolves or lions, the bison analogues would have to become even larger and more aggressive, much like the ceratopsid dinosaurs like triceratops. Evolution might push this category of beast to elephant size to best be able to fight a dragon.

Finally armour and other defences can be selected for. Dinosaurs had fully armoured ankylosaurs, and modern day creatures like armadillos have adopted a similar protective coating. Hedgehogs replace armour with bristling spikes and skunks spray noxious chemicals, all adaptions and behaviours which could be scaled to "11" to protect the animals from dragons. Camouflage will also become more and more effective and elaborate to protect animals from the vision, scent or hearing of the dragon.

Lesser predators will also change, seeking gaps in the dragon's ecological niche to survive and thrive. Predators might specialize in prey dragons find too small or unappealing to eat, or work in packs to cooperatively take down evolved dragon prey and defend their kills against competition (even dragons might think twice about tangling with a pride of sabre toothed tigers or a pack of dire wolves). Scavengers will also become much faster and more ruthless to clean dragon kills before the dragon decides to return.

Parasites and symbiots would be difficult to categorize; cleaning birds seem likely, and the sorts of parasites that could thrive in the guts of a current top predator would most likely be able to colonize a dragon as well.

Look up and Live

In addition to the other excellent answers that cover a lot of ground, a primary adaptation will be simply to look up.

Above a certain size, prey animals don't have to worry about being attacked from above, only from ground level. An ecosystem that includes dragons will mean that death can come from above. Being able to look up or defend against attacks from Up will be required survival traits.

Dinosaurs were the first Dragons

More generally, the suborder Anklyosauria has many examples of armored dinosaurs that defended perfectly well against giant, big-toothed, big-clawed, fast-moving, flesh-rending monsters. Armored dinosaurs never had to defend against a flying foe but their armor would have proved formidable anyway.

Perhaps a mix between an Anklyosaurus 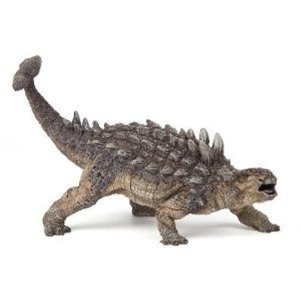 where armored plates along the spine, coupled with a frill to protect the neck will offer sufficient protection to get the dragon to attack someone else.

Over time, I expect that whatever creatures developed in the presence of dragons would develop the ability to rapidly change direction for a short burst to escape any stooping dragon. If a dragon is diving on prey, the prey only needs to be able to get out of the way enough to make the dragon miss. Kind of like throwing yourself out of the way of a speeding car. Just a few feet is enough to avoid injury or death.

If dragons hunt by scent then prey animals will evolve to have no scent or some way to mitigate it. Deer fawns have no scent for a time after birth as their primary predators are scent hunters.

If dragons hunt by sight then prey animals will engage in a never ending dance of camouflage to evade however a dragon perceives prey. Note that modern day sharks specifically look for the silhouette of seals. The latest wetsuit designs break up the human silhouette so it looks like nothing at all or not a seal to a shark.

The evolutionary adaptations of an ecosystem would largely depend on the evolutionary path that the dragons themselves took. Basically if the dragons became quite large before developing flight, you would see different adaptations then you would if dragons developed flight before becoming large. Likewise the stage at which fire-breathing became viable would change the development of the surrounding species.

I think it would be a safe assumption that flight would be one of the dragons' early adaptations. Developing wings after getting too big would be troublesome for dragons who sprouted wings before the wings became strong enough or large enough to provide lift, the precursor to useable flight wings would be a liability for a large dragon and probably wouldn't pass on very well.

So, your prehistoric dragon would likely start off as a small, canopy dwelling predator with rudimentary gliding capabilities, like a flying squirrel. At this stage the going adaptations for avoiding dragon attacks would be:

Over time the dragons who developed stronger more specialized flight wings would become more maneuverable in the air, thus increasing their chances of catching jumping crickets. As their hunting prowess increased they would have some spare food energy that they could use to grow a bit larger bringing more things on to the menu.

Now dragons begin to look more like dragons, just smaller. Of course as the dragons become more proficient hunters, prey animals begin to develop counter measures. At this stage the going adaptations for avoiding dragon attacks would be:

But as they get larger, their energy requirements grow forcing them to choose larger prey animals, hunting rodents now expends more energy than they take in for their efforts. At this stage the going adaptations for avoiding dragon attacks would be:

As their prey gets bigger and starts to form herds and fight back, the dragons further develop their fire-breathing ability, sticky bile gets ignited to form an effective napalm. At first the fire adaptation is probably used to redirect and break up herds. At this stage the going adaptations for avoiding dragon attacks would be:

You probably noted that being poisonous was a strategy developed early on that kept certain species from being eaten, this will probably remain one of the most effective deterrents.

One notable question that needs answering is why forests still exist in a world with dragons. Dragons, as large, flying predators, would find it much easier to spot and catch prey in an open field than in a dense forest. A dragon would not be able to fly in a forest at all, and, in fact, exceptionally large dragons may struggle to enter a forest in the first place.

As a result, dragons would be inclined to burn down forests whenever they see them, which could theoretically destroy almost the entire arboreal ecosystem.

If your world is more magically inclined, there may be magic forest guardians to prevent this, but otherwise, trees will probably have to evolve to be sparse... Or, alternatively, forests may grow rapidly, and develop in such a way that being burned to the ground is a normal part of the forest's life-cycle. As mentioned elsewhere here, some trees already use fire to germinate, so this has precedent... this is just on a larger scale. Specialized seeds could use the massive firey updrafts to fly truly astonishing distances, allowing the match-trees to colonize new areas much quicker than other trees.

Another potential feature in a world dominated by dragons is that, as some prey species are hunted to extinction, the empty niches might be filled by the dragons themselves. Say your world had something akin to elephants... Large animals reproduce slowly, and elephants have little defence against fire, so it's likely they'd die out, leaving the niche of enormous herbivore open. One enterprising line of dragons might develop herbivory to take advantage of the large amounts of grasses that the elephants used to eat. Herbivorous dragons would likely be much more prepared than elephants to defend themselves against predatory dragons, because they would already have a heavily fire-resistant body, which their ancestors evolved during the millennia of battles with other fire-breathing dragons.

Not the answer you're looking for? Browse other questions tagged evolution environment dragons or ask your own question.

39
How could Medieval cultures defend themselves against dragons?
11
Defensive strategies against teleporting dragons
4
What environmental pressures might cause rodents to evolve social behavior?
43
Why did dragons evolve to be smart?
27
What natural protections could a small oceanic island have against tsunamis?
6
How do marine dragons evolve flight without any feathers and no hollow bones?
1
How might bridles for dragons be designed?
19
What natural force would prevent dragons from burning all the forests in the world?