In a supercontinent would ships still be the primary way of transportation before the invention of engines?

My world is made of a super-continent with very little isles, it has 100 countries, 97 of which are on land. 3 of those are underwater for folk who are able to live confortably in the depths of the sea. Most of those countries are on the east side of the continent. The center of the continent is too dangerous and harsh to be populated, but still it's not an arid place and has some nomadic tribes that manage to survive far away from society. The entire world speaks similar languages, how similar? Like how all germanic languages are similar or all slavic languages sound the same and some are interchangeable.

For a merchant living on a super continent would it still make sense to use ships as the primary way of transporting merch? 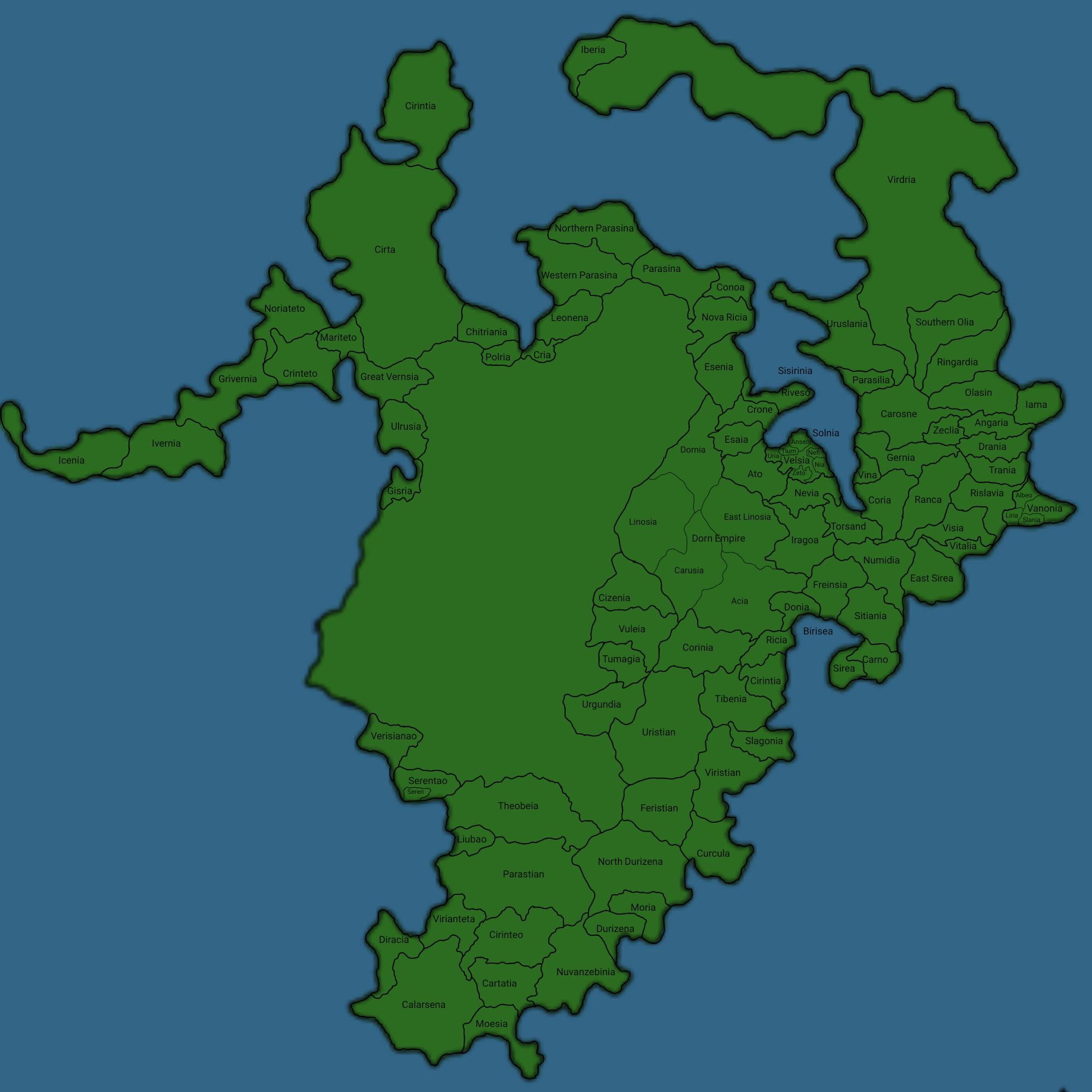 Also this is the actual size of the continent compared to the entire world map, this is a flat map, not a spherical one. 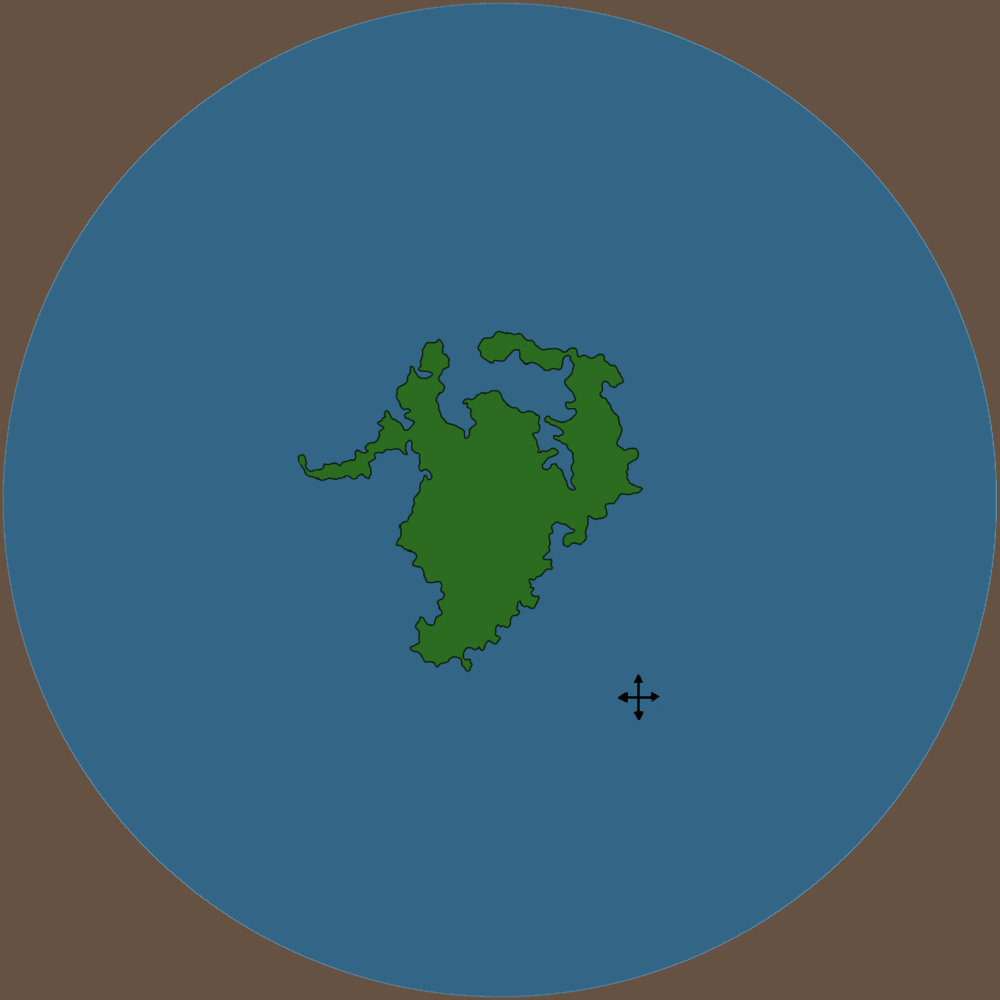 I believe that you may be asking slightly the wrong question. You ask:
"Will Ships still be useful on a super-continent"

But a slightly better question is:
"Where will trade occur, and through what means"

Curiously, predicting trade is often a fairly good proxy for technical prowess and societal development (ie trade centers are often among the first places to adopt systems of currency, economics and written languages).

So, the societal hotspots for your continent may be: 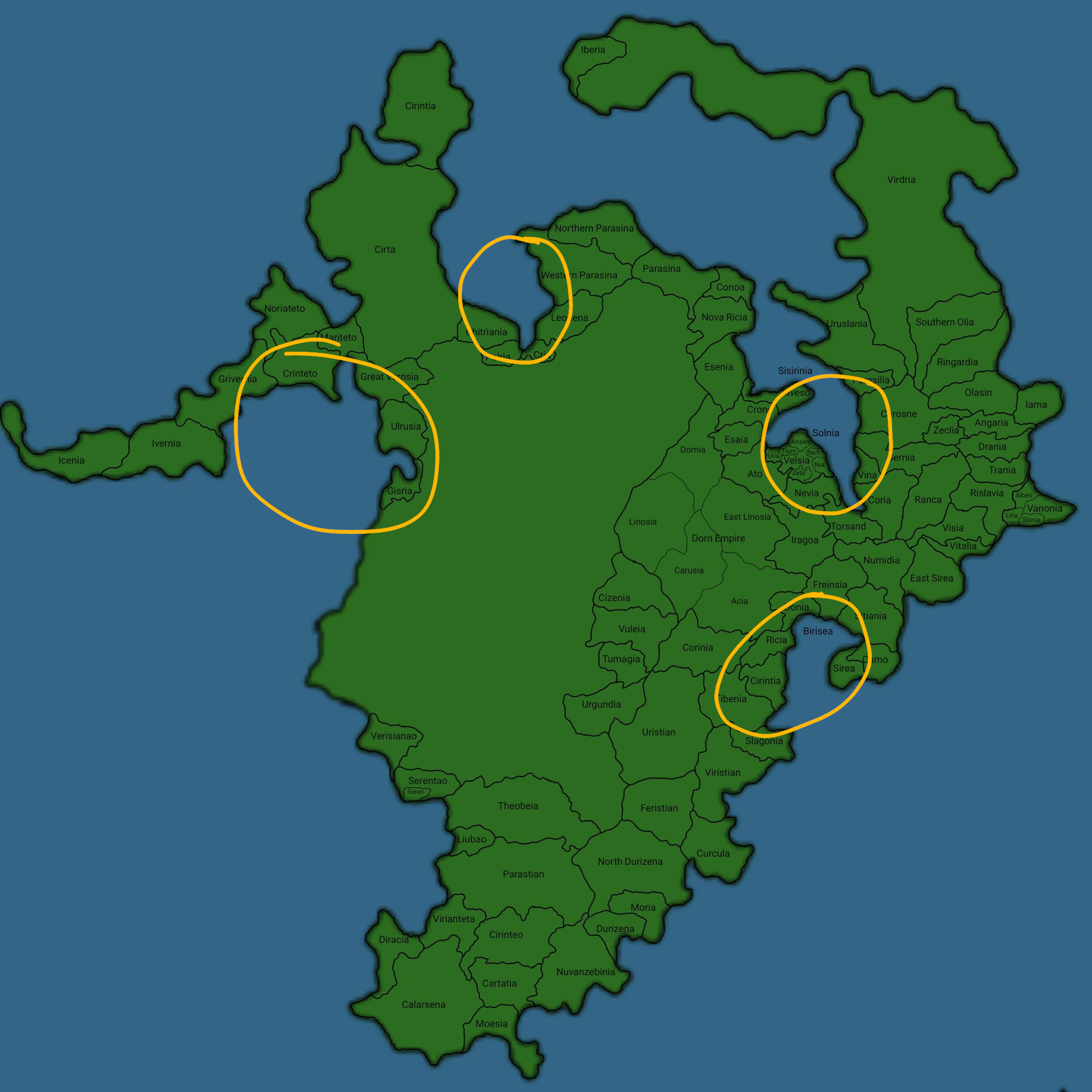 The area around Solnia is crammed with countries and easy land routes, quickly supplemented by sea trade. The sea is sheltered by the spit of Uruslania, and so sea travel is practical and easy in this region. As soon as rudimentary boats have been created, Velsia will be able to trade "across the sea" with dozens of countries. (I can imagine Velsa and Riveso as the capital of the world in the early days of sea travel - similar to what Rome was. Heck, put a shoe-shape on the end of the Riveso Peninsula and it Velsa and Riveso are practically Italy and Greece)

Similar stories play out in the other circled regions, though probably to a lesser extend. Crinteto region I imagine as a bit of a late-comer to the party, as it is more exposed. Ship designs from that region have smaller cargo payloads, but their shipbuilding is highly advanced. Their captains known for sea-faring skill. But they don't have a great economy.

These hotspots will generate internal trade via short sea routes, but until shipping advances allow longer distance travel, they won't really interact other than via long-distance-road transport - silk road style. I don't know exactly what tech level required is. 17th century ships totally could, but even in the 2nd century, India was trading with China via the sea. Anyway, after ships reach some level of seaworthyness able to cross long distances (perhaps the designs are originally Crinteto?), sea trade really takes off, and the land routes change.

In particular, notice how narrow it is between Torsand and Freinsia? That's a prime land transport route. Goods may be transported in from the south, hit a port at Freinsia, be transported by land to Torsand, and from their access dozens of other countries. Iragoa or Numidia may frequently fight for trade deals, or may become neutral (like Switzerland, which historically had a lot of trade passing through).

Mariteto and Cirta are also a candidate for a great overland route, but there aren't many socieities over on the west. But imagine if Verisianio wanted to trade with Parasinia. Either they have to go anticlockwise and possibly use the overland route at Freinsia, or they go anticlockwise and they cut a long way off the journey by overlanding through Mariteto. However, Mariteto does have something else going for it: It'd be a great canal building project. I can imagine distant wealthy societies paying for the cutting of a canal through places like Mariteto and Cirintia. Virdria may be a bit remote to be economically feasible to drive a canal through.

Here's a rough trade map showing some of the prime trade routes that I can forsee arising. Of course I don't know what the mountains are like, or if one country is mostly swamp, but it may give you some ideas where to look for interesting stories. 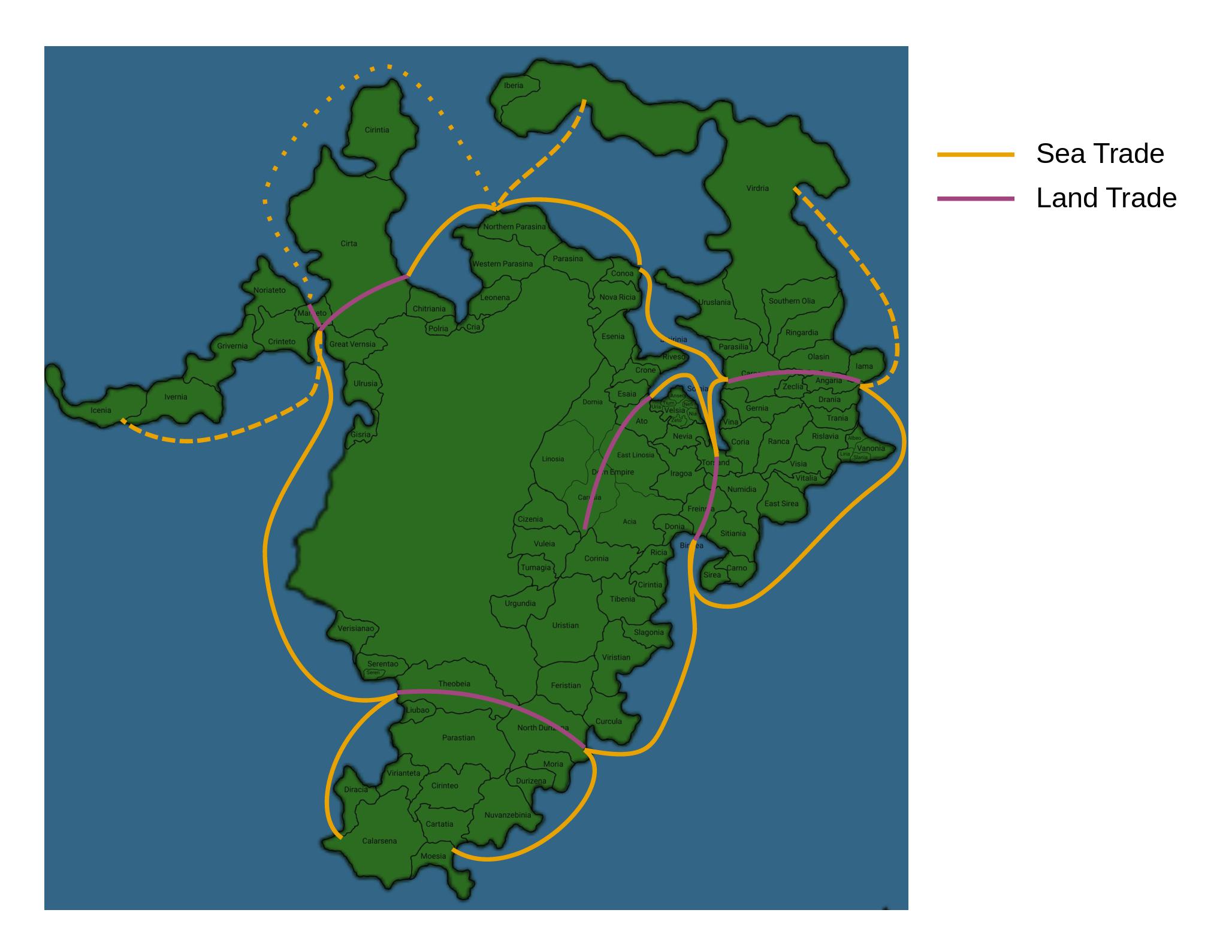 Some things to note:

Oh, and vikings are totally found in Iberia and raid across to Parasina.

A couple interesting things from comments:

There is preindustrial transport rule of thumb:

So it was more expensive to move goods on pack animals ~100 km from port to farm than to move them from England to North American colonies.

It is very approximate rule - sailing 100 km in Ionic sea and in Roaring 40s is not the same, you may have a nest of pirates in the way, land transport may be safer even if more expensive, etc.

So if there is no river then ocean then ship is ~25 times more efficient than cart, and if there is no good road (you have to go over mountains, for example) - then its ~125.

Even neighboring countries may prefer to trade most of their goods via ocean rather than land, even if you have to go 10x bigger distance on ship.

There cannot be a single answer, it depends on the location of the departure and arrival places.

It's all a trade off between the cost of the two alternatives:

Within the cost you should include:

For a reference, this map shows how long did it take to go from Rome to other places in the Empire 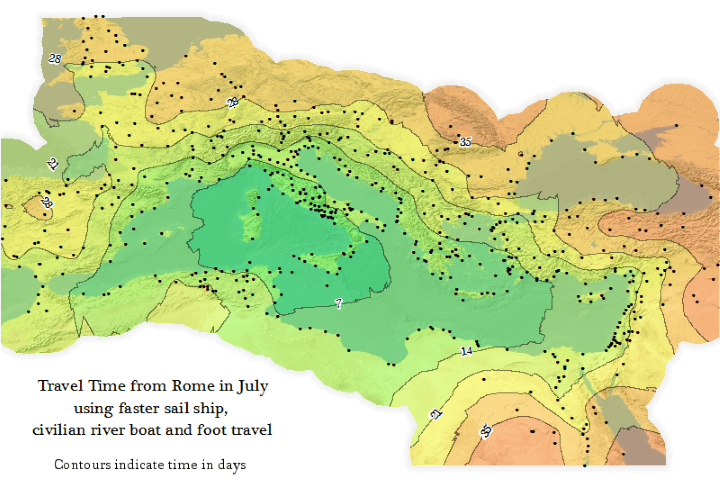 It depends on where the rivers and mountain ranges are, and on whether there are any rival states that make trade difficult in certain regions.

Consider this completely fictional planet with a super-continent: 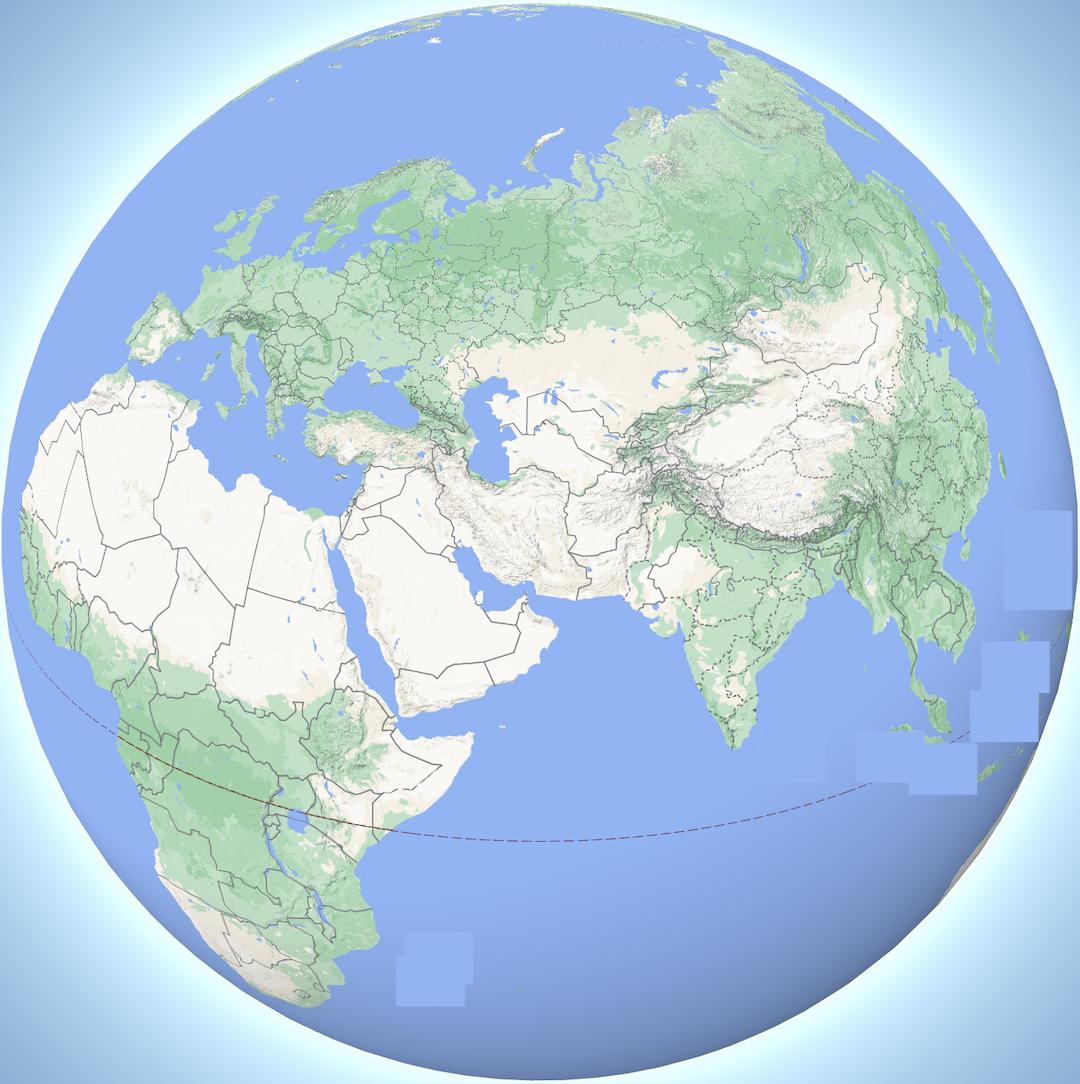 Even nowadays, a vast majority of long-distance trade is still sent by ship around/through that super-continent. The disruption following the blockage of the Suez Canal last year made that abundantly clear.

Even internally, a lot of trade was done using ships (over rivers and canals) in large parts of Europe and elsewhere for a long time. The move to trains and then lorries is quite recent.

The consequence is that many of the largest cities in the world are either sea ports or on large rivers (or both, on estuaries of large rivers):

Though of course they current size is recent, they gained prominent status because of their situation quite a long time ago.

Yes, definitely, just like it happened in real life.

Traveling between the opposite sides of your supercontinent would be much easier by sailing around, than going over land. My proof is that in real life, much bigger detours were made to avoid land journeys.

In the USA, the biggest cities were on the two coasts, and people traveled between them mostly by ship. Before the Panama Canal was completed in 1914, the journey was very long, but still preferable to the land route. Even in the late 19th century, when there was a rail connection between the two coasts, travel (and especially bulk cargo transport) by ship was still used.

If this real world detour was historically preferable to the land route, then surely on your continent the (significantly less than real Earth) detour will be preferred over land routes. 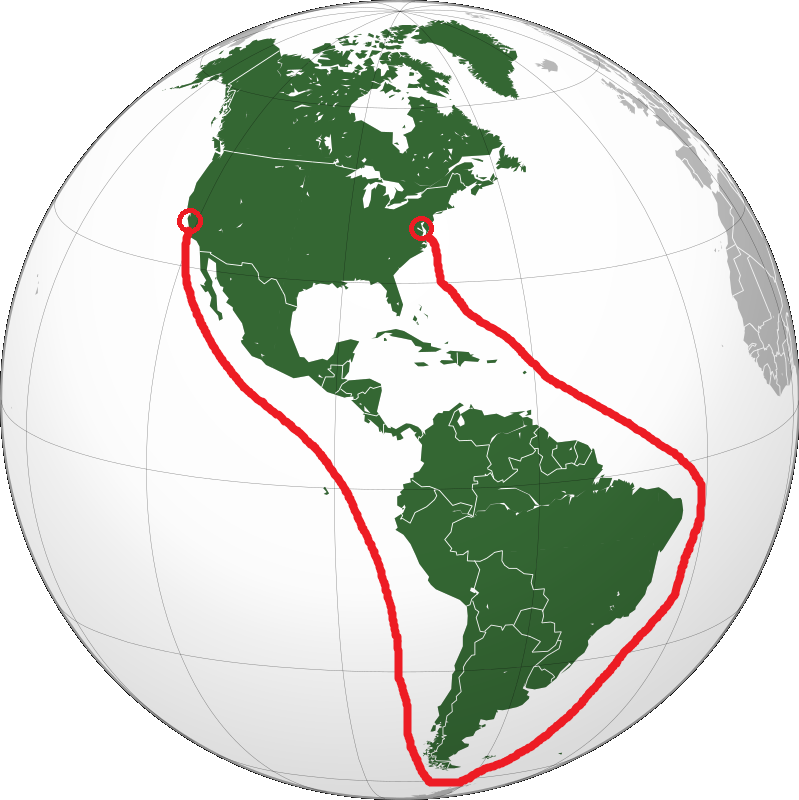 (I know that they often used the Magellan straits, this drawing is only an illustration for the distances involved. And yes, passengers often debarked in Panama, crossed over land, and boarded another ship, but even that is a big detour, and not really practical for cargo, making the long detour common until the completion of the canal)

From what you've described about the world, it seems like the large Western/central region is difficult to pass through on land. Those in the Southern countries would want to sail to the Northwestern countries instead, for example. Another thing to consider is with so many countries on the East coast, passing through each civilization might be a logistical hassle (border patrols, tolls, political conflict). It might be easier to simply sail around them than travel through so many.

If they wanted to get from one coast to another, then sure. Especially if there were barriers like mountains on the land routes. Then again, such a large ocean might be an extremely windy and stormy ocean, which could make sailing tough. Although maybe the windiness could help too..

Canals... depending on geography

Consider the Guineas in South America (French Guinea, Guyana, Suriname). Almost all the development is coastal. The countries lay claim to vast inland areas, but it is deep jungle with precious little development or human settlement: mostly it belongs to the animal kingdom.

Your eastern peninsula has many countries, but almost all are coastal. So they might work like the Guineas, with all the development coastal and the inland borders being mostly notional, as the territories are difficult to inhabit or control.

However, that doesn't work for the main continent. There are many countries entirely landlocked. So either a) they don't trade much and are largely self-contained (like the Plains Indians)... or b) they rely on navigable rivers or man-made canals, like most of Europe.

Canals were being built 2500 years ago by the Chinese. It can be done by any nation with water and sufficient organization; it's certainly easier than building the Pyramids, and with much better economic payoff.

You said "pre-mechanical-engine" -- that is important. If you can build and engine, you can build rails and locomotives, and that's the end of canals for any but the lowest value bulk commodities.

So depending on your geography, era and national determination, you may be talking about the "age of the canals".

You would have to figure out whether the "lock" gets invented (1000 years ago on Earth), as that will greatly increase the reach of canals, making it unnecessary for all canals to be dug to the depth of nearby rivers.

(The only way a waterway can be navigable and at a slope is for the slope to be very slight and for the flow to be enormous - pretty much diverting a large river. Water supply is a frequent problem for canals; some even had elaborate pumping stations.)

Note that there is something called a tow barge. This is basically a ship being pulled by a horse who's walking next to it on land. These were the superhighways of the past and are most effective inland, not across seas, so these are perfect for a supercontinent.

5
Shantungosaurus chase, mad max style
1
How to monetize soap bubble portals that travel across dimensions and bring various creatures and objects from different times/places in one planet

14
Unsettled continent
12
Bridge over Lake Baikal
70
Help! Our merchants keep turning into villains!
11
Underground Terrain Types / Biomes / Agriculture
1
How plausible are the terrain and land-forms on my fantasy map?
3
Where would rivers and lakes make sense on this continent?
8
How Would the Mountains Form in This Supercontinent?
31
If I build a railroad around the edge of a supercontinent, will that kill the oceangoing shipping industry?