Living around a quark star

Let's assume the theoretical quark star exists - and humans have found it. There's a planet orbiting it, and for the purposes of my story, I want it to be habitable.

My question is: Can you have a habitable planet orbiting a quark star?

Quark star: It may be purely theoretical, but the mass and size limits in the theory are between the heavy neutron stars and the smallest stellar black holes.

A neutron star from ~6000km (radius of the Earth) is m5-m6 barely-visible star-like object (the quark star would be even dimmer). Then again, its tidal effects at the same distance will tear a human body with ~40kg between the head and the feet. Sorry, no planets bigger than few centimeters at this distance (or closer).

On the other hand, an accretion disk around such object can outshine even the original star by few orders of magnitude and is especially bright in wavelengths outside the visible. As in, extra strong radio and x-ray.

OK, put your planet far away and you get a habitabl-ish planet with rather rough climate (the luminosity of the disk varies a lot) and harsh space weather as well.

If your planet is tilted, your seasons will be 100s or 1000s of years long (the orbital period of the planet around the star). Your people may need to migrate in the meantime.

Strange planets can be very small. 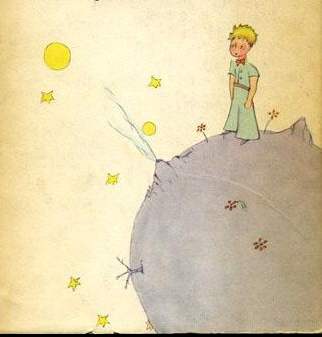 How big could a planet made of strange matter with 1g be? It might be less than a pea. Strange matter is dense.

It is interesting to note that, under the SQM hypothesis, quark matter is bounded by strong interaction but not gravity. So, SQM can even exist stably in the form of small chunks in the universe. It implies that planets composed of strange quark matter can also exist stably 8,9. Strange quark planets are very different from normal planets. They have a much higher mean density and a much smaller radius, which provide us with some effective new methods to test the SQM hypothesis... For a strange quark planet, its mean density can be as high as 4 × 10^14 g cm−3...

The main point of the linked article is that such planets are so dense they can orbit very close to their parent strange quark star - closer than planets made of normal matter. You can put it as close as it needs to be to keep warm which might be very close.

Strange quark stars are like neutron stars in that they kick out most of their energy as Xrays. I here propose that your habitable strange matter planet has an atmosphere (by definition) and just like Earth, that xray-opaque atmosphere will soak up the xrays. The energy from the xrays will be re-emitted as visible light. The heat source will be the glowing sky.

Note that your link says a quark star would be found inside a neutron star. For practical purposes this means you model it as a neutron star, the quark interior doesn't matter. Thus your world is a pulsar planet. You've got some serious problems--the energy emission is low which means the habitable zone is close in--which means tidal locking. You've got an eyeball planet, it's only going to be habitable in the twilight zone.

Not the answer you're looking for? Browse other questions tagged planets survival stars solar-system .

3
What happens when a tidally-locked planet breaks out of the synchronous rotation?
12
Earth-like planet orbiting neutron star?
2
Longest possible eclipse in double star system
7
What would be the effects on a planet orbiting a shedding red giant?
13
What is the theoretical maximum number of habitable planets in one solar system?
3
How to explain a planet around a K-Type star with Orange/Red/Purple plants?
16
How did aliens on a habitable planet hide themselves during the recon and scouting stage by human colonists?
0
Would an elecroweak star radiate similarly to a normal star? If so, would a habitable zone around it even be possible?