What can you know about a creature just by looking at their appearance?

To give an example, I have this species of elk minotaur, they are mostly human looking but have a elk/deer head, ankles and hooves. (image source Raid Shadow Legend concept art + my low poly model) 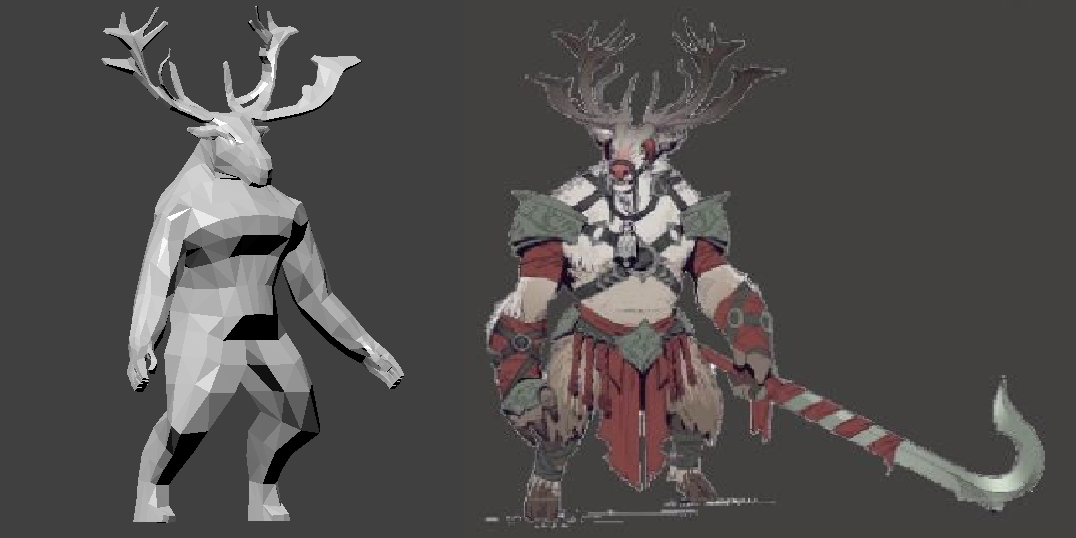 If I wanted to know their eyesight and intelligence or other stuff I could just make it up since it's not something that is always obvious just from observation. But things like how though they are should be clear just from intuition by looking at the body structure and skin texture. So I could say that minotaurs have a toughness of 1.20 when compared to a human, the human being the default for the value of 1.00 , just throwing a random number.

How does this question relate to world-building?

Knowing how your creatures differ from humans makes it easier to create cultures as all you need to do is look at things that already exist on our planet and edit them a little bit based on clear variables.

Is this question opinion based?

I'm looking for anatomical information, I don't think this qualifies as opinion based unless anatomy is not a clear science.

What is my actual question?

Other than thoughness, what other things are obvious just from looking at the appearance, height and weight of a creature? like if hypotetically things like lifespan or ability to speak are usually obvious just by appearance or if maybe I'm wrong and almost nothing is obvious by appearance alone?

What qualifies a good answer?

A list of 2 or 3 factors which are obvious from appearance and have a strong influence in culture and the relationship between humans and other creatures, to make it less broad, focus the answer on my minotaur example.(This is just an example not another question) like, is it visibly obvious when a creature has a certain diet just by looking at their body or could something have the appearance of a predator and not be much of a meat eater?

What qualifies as the best answer?

The baseline for what qualifies a good answer, plus If there is any, a source on how to learn and study such things with ease on my free time. Not something that I need to dedicate my life to in order to study and understand it, or at least a brief explanation of this concept that I and other users who don't know much about external anatomy could easily understand and apply to their future creature designs.

Yes, you can tell a lot about a creature just by looking at it, if you've made a study of zoology as I have. Indeed, the best way I know to learn how to pick details from the image, corpse, bones or teeth of a creature is to study zoology at university level... or at least read the text books.

You can tell quite a bit about an animal's eyesight and even its habits just by looking at its head. For example, those minotaurs have a typically bovine-appearing head, with the eyes on the sides of the head. This is an adaptation to being prey, giving a wide field of view so as to better be able to spot predators sneaking up for the kill. It comes at the cost of a near-non-existent arc of binocular vision. This is at odds with the mythology surrounding minotaurs, that they are carnivorous and hunt their prey. However, some pictures of minotaurs do show that they have more binocular vision than a cow.

The size of the skull and brain case in comparison to the size of the body is an indicator as to the intelligence of the creature. Intelligence requires brain tissue, and while the actual volume of brain tissue may vary considerably for a given level of intelligence, intra-cranial volume is a strong indicator. In the case of these minotaurs, they are likely not particularly more intelligent than a cow, given their quite bovine-shaped skulls. However, as the processing ability of the mammalian brain is dependent upon the surface area of the cortex, there is the possibility that the cortex is highly convoluted, having a much higher surface area than a cow, and therefore higher intelligence. They still wouldn't likely be as smart as humans, though.

We don't see these creatures' teeth. They are very important to be able to tell what they eat and how they digest their food. Minotaurs are supposedly carnivorous, so we would expect carnivorous dentition: sharp incisors, long canines and shearing carnassials all adapted to eating meat. However, they might also be herbivores, however their body form suggests that they don't have a sufficient large digestive system to be herbivores. Perhaps they could also be omnivores similar to humans.

That these creatures have antlers like those of a deer is suggestive of their mating habits. Antlers such as these are evolved to interlock with those of another male during dominance contests as a prelude to mating during the breeding season. This helps prevent serious injury during the conflicts, making them more about strength than luck or skill. This is then suggestive that these beings don't actually want to kill each other when they fight each other, that such battles are more about dominance than eliminating a foe entirely.

The bodies of these creatures also bear out this supposition. They are humanoid, but have robust skeletons with a great deal of muscle mass. While they have cloven hooves, which originally evolved to lengthen the legs and increase stride length and speed, that their legs seem short and thick suggests that they are evolved to be able to exert great force at the expense of speed. They would be able to accelerate quickly, but wouldn't likely have a maximum speed much higher than that of a human.

Their broad, deep chests are covered in muscle, as are their arms, indicating that they likely use their arms for wrestling during these mating conflicts, but the size of the chest also shows that they have a large set of lungs and likely a large heart too, meaning that they are likely capable of prolonged exertion.

That these beings are furry suggests that, unlike humans, they do not have the ability to sweat, and therefore the main limitation on their ability to exert themselves for long periods of time is that of thermoregulation. Prolonged exertion would generate heat that they are just not as capable as humans at eliminating, and therefore they would likely overheat before they went into oxygen debt. They might be able to maintain a chase for some time, but as they would have to rely on panting for thermoregulation rather than sweating, they would not be able to keep up with - or outdistance - a trained human runner over any great distance. They're short and middle-distance sprinters, not long-distance runners.

Fur is suggestive of their preferred environment. If they lived in particularly cold areas, their less-than-human thermoregulatory abilities would be offset by the potential to rapidly lose body heat by flattening down the fur and flushing the skin with blood. By withdrawing blood from the skin and erecting the fur, greater insulation would be achieved.

Finally, carrying weapons suggests that these creatures are territorial, and reserve their violent tendencies for foes of other species.

However, as illustrated, these beings' physiologies don't appear to match their supposed capabilities or even their likely habits given their physiology alone. They seem poorly designed rather than naturally evolved, and it seems likely that they would not be a particularly successful species.

The type of diet, even if ascertainable, is not so relevant for the danger level: elks, elephants, cows, hippos are examples of herbivores for which one should better take a safe distance.

You recognize the creature is not natural because its parts are from unrelated animal groups.

In real life, animals occur in the context of their evolutionary cousins, and share features within their groups. In a single creature, features from two or more unrelated groups chimerically grafted into a single beast means the beast was not a product of nature, but a product of the imagination, or magic, or supernatural forces. 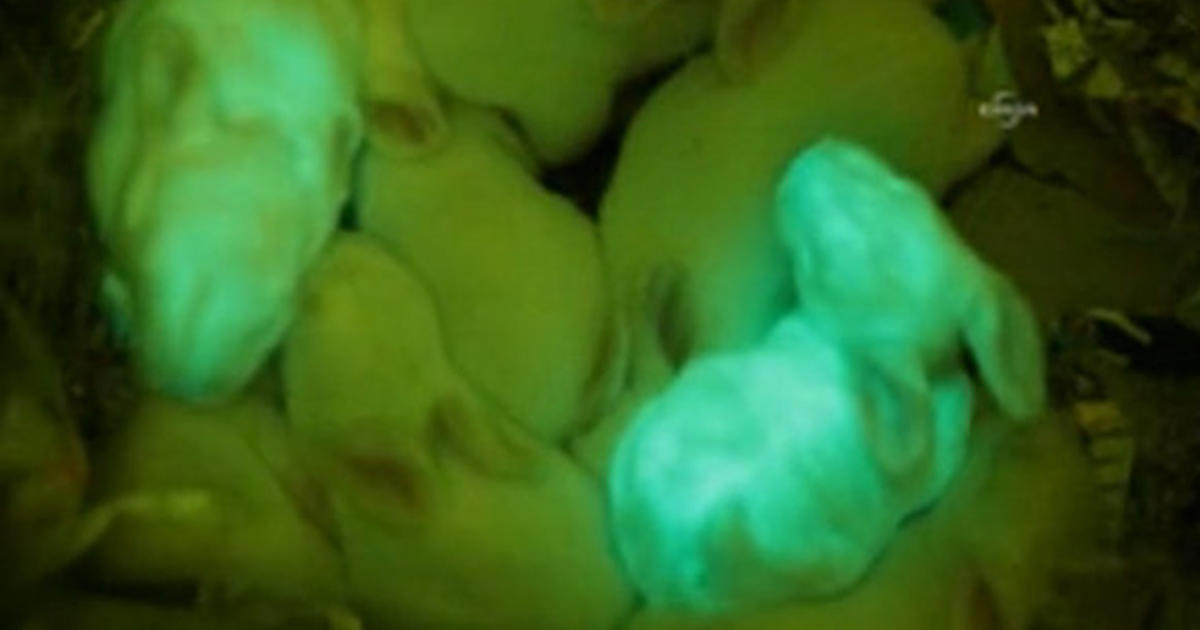 I think in general, certain features and attributes are used to signal things. If you depict an animal with a weapon, you suggest your animal is dangerous and intelligent, because it uses a tool (the weapon)

The larger the teeth are, the more dangerous.. and primitive.

A princess should be beautiful unless she is evil. Stepmother same thing. That's why they put stepmothers in evil roles, their uglyness is obvious and already present.

The opposite. Have it look like a child. Let it wear pink, or light blue. This will effectively disarm your character. It is appropriate when the character has to be a victim, like ET, stranded on Earth. It has neotenous features: ET is small, with large eyes and it has a high pitch voice. It is an alien, but there would be few humans that would be scared of ET. Because it looks like a lost, innocent child.

Opposite features may work

Small creatures are not dangerous, large creatures are. But when your large creature looks like a fragile old man, it would become "the friendly giant". Similarly, you can make a small creature look dangerous. Gremlins are a nuisance and their heads look fierce, but Gremlins are not really dangerous.. The Gremlin is too small, it will only scratch you, it can't kill humans. Just scare them. Of course, the viewer/reader will be amused.

.. or opposite features can weaken a character

At this point, a critical remark about your Minotaur. Opposite features will not always work.

King Minos of Knossos sacrificed people in his labyrinth, to be eaten by the Minotaur. This creature is based on mythology, to be authentic it should actually kill humans.

But your version of the Minotaur looks quite innocent. A mix of Santa Claus and one of his reindeer. I think it is because of the antlers you put, which are misplaced anyway, because the Minotaur was a bull (Taurus) and when you put a feature on its head, it should get deadly horns, not antlers. The antlers feature indicates deer, which is not a dangerous species for humans.

This one maintains most of your features and proportions, but it has horns and claws, no antlers, 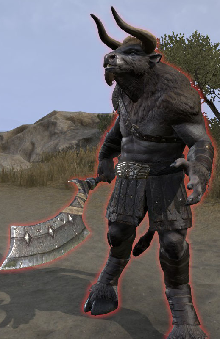 Not the answer you're looking for? Browse other questions tagged reality-check creature-design anatomy .

52
What does the Minotaur eat?

34
Anatomically correct multiarmed humanoids
3
Are there any reasons why a dinosaurian creature wouldn't be able to have a thoracic hump?
19
What sounds would be common for both forms for a human/wolf shapeshifter?
8
Is petrifying vision plausible in an animal?
6
Boron based life- blood
5
What would the size constraints on my creature be?
3
How do I explain the compound eyes of my creatures?
12
If quadruped mammals evolve to become bipedal will their breast or nipple change position?
5
Land running Octopoid anatomy