If you don't know what a Rhydar is, please see here and here.

So, Rhydar are pretty interesting creatures. Post-apocalypse radiation and magical energy (long story short, this world was apocalyzed-rendered apocalyptic-by another world's inhabitants-magical creatures-invading it, which led to humanity deploying nukes and other highly destructive forms of weaponry in order to save themselves from their supernaturally powerful foes) turned them from regular rhinos into blind, violent yet highly efficient predators, capable of compacting and altering the flow of air to pull off devastating sonic attacks.

However, despite all this, I've imagined Rhydar as being symbiotic, like regular rhinos. How could this be possible?

Why I'm Asking: If Rhydar can echolocate and have a strong sense of smell, and they're naturally violent and aggressive creatures, it would seem that they wouldn't need or be able to form symbiotic relationships. Yet, I've imagined Rhydar as being able to benefit from and bond with other monsters, from bird-like entities (Needki, a mutant Kiwi Bird, or Bagooska, a mutant goose) to intelligent, humanoid monsters like Drakeneko or Elvaris.

This bond is so critical that without one, Rhydar cannot evolve (mutate into a higher form) without bonding to another monster, which rides on it and helps guide it through life, while also having a heavy influence upon Rhydar's evolution. This means that somehow, despite the above, Rhydar can not only bond with other species and benefit from the bond but bond so deeply that their form changes to reflect their rider! Thus, this question is critical to explaining how Rhydar can evolve into Rhydrage (and yes, the evolution name is based off of the phrase 'road rage =)).

Rhydars are Incredibly Vulnerable to Parasites:

Being a monstrous powerful beast that can destroy anything doesn't shield you from small flies landing in minor wounds and the rhydar being eaten alive by the larvae.

In Zululand when the stomach of a dead rhinoceros is opened, a great number of maggots up to 4 cm long are regularly found attached to the wall. They are whitish to yellow; the biggest ones may show irregular dark spots, which indicate that these larvae are soon to be passed via the anus for pupation.

While the rhydar may be an invincible predator, huge creatures are often vulnerable to parasites that are tiny in comparison. A symbiote is needed to pick off and eat the eggs of the parasite to prevent infestation. The most logical kind of symbiote would be a bird, since there are all ready a variety of birds such as the Egyptian plover that perform this function for even some of the most aggressive predators in existence, like crocodiles.

These parasites can be so overwhelming to the rhydar that they simply stop growing, so great is the burden of supporting millions of parasites. The parasites might even hormonally induce the rhydar to develop into an alternative form optimum for the parasite. But the rhydar that is able to be non-aggressive towards a symbiotic cleaning species is kept healthy. Even if a few parasites get in, the symbiote prevents repeat infections. The rhydar may undergo a physical transformation in the presence of symbiotes to indicate it is safe for these symbiotes to approach, like a color change. The rhydar may have behavioral changes, like symbiote-seeking behaviors to stay clean. Imagine a bird colony with a rhydar patrolling around it - it's a brave predator who would attack such a place! 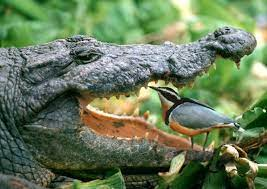 Yeah we've seen these beasts, Rhino's were much more friendly and less blood thirsty. Rhydars can be very agressive but they are blind, huge and slow and you can hear them coming. There's this little crickets they carry around. Rhydars use a high pitch sound to listen to the echo's around, but they can't make the high sound themselves it seems.. so they let the little crickets put it. When you hear cricket sounds approach, make sure you watch out for the Rhydar !

Vultures would benefit from the "road kill" of Rhydars.

Something as aggressive as a blind mutant rhino is bound to leave a lot of rotting corpses behind, something vultures would gladly dig their beaks into. Vultures are natures cleaners, they are an essential part of the ecosystem. Without them pests would multiply and disease would spread. Rhydars that leave carnage behind are in the grand scheme of things less likely to have a sustainable source of food. More disease means less food to go around.

Vultures typically swarm around carrion and prevent smaller birds from accessing it. They quarantine the corpse until they are finished. Larger vultures pierce the hide to open up access to the flesh. Smaller vultures eat the remains and even smaller ones clean the bones of scraps. Finally when only the bones are left behind some scavengers can shatter the bones to get at the nutritious marrow inside. End result: a skull is left behind (its shape makes it hard to eat).

There is no doubt a bond would form between these two species. Vultures are known for following weak animals waiting for them to die. Because they can fly (and aren't blind) they can easily surveil the area and alert Rhydars to their next victim. They also benefit from the Rhydars protection. After all vultures are hollow boned and can't really fight to defend their acquired carrion that well. Rhydars using a sonic attack would deter any potential rivals, because they need the vultures to spot prey.

A foreseeable issue with this alliance is the Rhydars loud sonic attacks. Vultures that stick around will likely suffer from auditory damage they may even adapt and become completely deaf. Rhydars on the other hand have excellent hearing. They could stomp the ground to alert their bird friends from approaching danger.

How does this help them evolve?

Well that depends on your creative choice. My bet would be on the vultures wearing the skulls of the Rhydars victims. They could even be so smart as to build a bone armour around their steed. Now that would be badass!

Not the answer you're looking for? Browse other questions tagged science-based biology post-apocalypse low-fantasy .

8
Growing magical creatures tissues in vitro
8
The Biology behind a slime that uses hydrofluoric acid to disable and digest prey.
1
Making a Predator For Chompers
4
Adapting Chompers For Land and Sea
15
How can children dying increase fitness?
0
Effects of Remnants on Monsters
2
Feasibility of Echolocating Rhinos Weaponizing Said Echolocation
6
Feasibility of Giant Caterpillar Archetypes