What if large pterosaurs like Quetzalcoatlus had survived as isolates in New Zealand and ended up domesticated by the Maori?

The question. Let's say a pterosaur like Q. Northropi survived as an isolate and thrived as apex predator in New Zealand for millions of years. Without much evolutionary pressure its species remained biologically stable. Then the Maori arrived around 900 AD, and were able to, in something like 200 years to domesticate those large flying reptiles.

How would that work? Humans able to fly a fast and long range mount?

The problem is mass. Large pterodactyls like Q. Northropi evolved only at the expense of having to shed every gram of unnecessary weight possible. Their bones were full of air spaces that saved weight at the expense of load bearing capability. And their muscle mass was restricted to the minimum needed to get them airborne and up to altitude. After that like albatrosses they relied their ability to glide to cover long distances. As far as I can remember Q. Northropi weighed somewhere in the vicinity of about 200 kilos or so (we think). Say about about 450 pounds (probably less) in old money.

There's simply no way an animal weighing 200 kilos could carry an adult human of average weight, say 80 kilos any practical distance - even on land let alone in the air. (And have you seen the size of the average Maori front row forward!)

EDIT/frame challenge: Have you considered falconry either using Haast's eagles or a suitably carnivorous pterodactyl?

The dragon riders would be children

Like other answerers have pointed out, a grown human is too heavy to be carried any significant distance, but a small enough child should be light enough.

Children have been used for all sorts of things that adults are too large to do. Probably the most applicable example is camel jockeys. According to the Wikipedia article, children as young as two years old have been trained as jockeys, all in the pursuit of the lowest possible weight. Camels run faster when unencumbered, and children can be bought relatively cheaply to replace those who grow up or fall off and break. Western examples of children in dangerous jobs include those crawling in narrow mines or under running machines in early textile factories. A somewhat nicer jobs is that of child singers.

If you include tasks that doesn't require small size or weight, the list of things children are used for gets much longer. Child soldiers are another horrible example.

You can teach very complex tasks to young children. Though not as good as teenagers or adults, the level of many child musicians, chess players, go players and circus artists is simply astounding.

As for the case in question: I see pterosaur-born, highly trained children being used to relay messages faster than any other messenger on Earth. I see them being used as unmatched watchers who keep track of vast areas, keeping the local authorities informed.

Edit for clarity: I think pterosaur domestication to a large extent would be an information technology. They could also be used for sport, like is done with the camels mentioned above.

In times of conflict, I see them as dangerous archers or sling operators as well as dropping darts and crude fire bombs to set buildings on fire. This will not defeat an army on its own, just complicate tactics for your opponent. They would stay high enough not to be threatened by archers on the ground, and would only have to watch out for other dragon riders (as I'd like to think early western observers would call them!). They could also land and have their pterosaur fight if the victim is alone and unarmed, or if there are many riders attacking together.

Early western explorers might not have been carried off by flying beasts, but they would likely have seen their ships set on fire. (This would also fit well with the idea of dragons breathing fire: You see something large fly high above, and suddenly the sail is ablaze!)

The dragon riders would also give the Maori unprecedented knowledge. They would not in themselves allow invasions of say Australian nations, but they would fly high above the world, gather news and make the best maps in history.

The careers of these children would be very short, and though they might be praised celebrities for a short time they'd have to find something else to do as they grow up. With careers that short I don't see this being a hereditary profession kept within certain families. The real significant profession might be that of those who train the riders, go around in search of new recruits and maintain a group of them.

A big Q. northropi may have the ability fly that far if it was unencumbered and could catch some good thermals. Slapping a human on its back would likely greatly decrease its range.

But, it would be a formidable way to discourage European real estate ambitions. :-)

1769 (as reported by one of the few survivors): The flag was planted and our captain, James Cook, began to speak. "I hereby claim this land in the... what in Hades are those things?!? RUN! Run for your lives! AAAAAAAA!!!!”

Oh, and even though Q. northropi wouldn't feel too much evolutionary pressure, the other animals would. I'm imagining those cute little kiwi birds are now weighing in at about 8-10 kg and like to hunt in packs.

Edit: Even with little evolutionary pressure, 65 million years is a long time, so some changes could occur even before humans get into the selective breeding game.

At first, a the handful of these that survive the great extinction would likely be hungry. Some would try flying to their uttermost limits to find new lands, but even if any made it, the lack of Q. northropi outside of NZ means none survived to the modern era. The good part of this was less competition for the limited prey inside NZ while ecosystems recovered from the disaster. Super long distance flight isn't the advantage it once was.

But, being on top of the foodchain has drawbacks. Population of prey grows supporting more top predators. The number of predators grows fast enough to eat prey faster than it can replace itself. Starvation then cuts the predator population.

More pressure in this direction comes if our Q. northropi decide to go for larger creatures deeper in the water. Instead of being limited to what's withing claw range of the surface, imagine something that big hunting like a diving bird. That tiger shark cruising along 12 meters down won't have a lot of warning when our now triphibious dino diver decides the shark looks tasty.

Of course, plowing into the water at high speed and then moving underwater again requires stronger bones and muscles. More food is available, but weight goes up and range is further decreased. Strength goes up so that one adult human becomes an easy load and two becomes possible for larger specimens to handle. 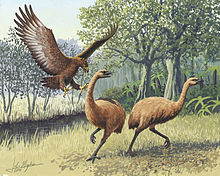 Before the arrival of human settlers, the moa's only predator was the massive Haast's eagle...

Polynesians arrived sometime before 1300, and all moa genera were soon driven to extinction by hunting and, to a lesser extent, by habitat reduction due to forest clearance. By 1445, all moa had become extinct, along with Haast's eagle, which had relied on them for food

In your world the pterosaur plays the role of Haast's eagle. Flying predators would have been eating moas and so to keep the flying predators the Maori would have had to refrain from eating all the moas. A giant domestic meat bird could have more consequences on world history than kids flying around on dragons. Kids could be good messengers and maybe rapid couriers. A meat animal and conservation of lands for it to feed in implies a whole different and farsighted relationship between the early Maori and their new lands.

Ultimately though I am not sure that domestic New Zealand species and land conservatorship would have made things go differently for the Maori post European contact. They would still be outgunned and disease would still ravage them. The ability to fly around on dragons would be noticed and greatly admired but it would be difficult to bring these big lizards back to Europe to show off. A question in my mind is whether the domestic pterodactyl and moa would survive contact. Polynesian dogs did not and dogs are pretty resilient.

Not the answer you're looking for? Browse other questions tagged alternate-history flight mounts .

8
How CAN a Wyvern be a Scansoriopterygid Dinosaur?

8
What would the British have done in Argentina and the surrounding area if they had been victorious in Buenos Aires in 1807?