How to completely domesticate big cats while keeping them huge?

From what I've gathered from answers to a similar question, the big felines would need: a homing instinct, more sociability, an increase in "synaptic plasticity" whatever that means, a general decrease in intelligence, infantilized features, and lots of meat to eat. One of the traits listed was also a smaller size, but as the title of my question says, I don't want that. Yes, I know that no matter how domesticated they are, their size will always make them dangerous as companions/pets since all cats have sharp hooklike claws and fangs that they might accidentally use while playing or doing anything else not intentionally an attack.

Edit:// I want them domesticated to be essentially the same as a companion/pet + guard dog.

Neoteny also called juvenilization, is the delaying or slowing of the physiological (or somatic) development of an organism, typically an animal. Neoteny is found in modern humans (compared to other primates).

Both neoteny and progenesis result in paedomorphism (or paedomorphosis), a type of heterochrony. It is the retention in adults of traits previously seen only in the young. Such retention is important in evolutionary biology, domestication and evolutionary developmental biology.

Humans are neotenous chimps. We bred ourselves. Dogs are neotenous wolves. It is pretty obvious that golden retrievers stay puppies even as they get huge. Cats are less neotenous than dogs because they have not been bred as long and the interaction is different. They are still pretty neotenous.

It would have been the friendliest, tamest, most adaptable, sociable feline risk takers that ventured into human settlements for the first time. In other words, adult cats with kittenish qualities self-selected for domestication. Rewarded with food for their useful rodent-killing abilities, these cats became accustomed to being fed by humans, creating a pseudo parent-child relationship. The feline ancestors of the modern domestic cat were those most willing to be held and groomed, and to live in groups with members of other species.

The cats that made first contact and their descendants are temperamentally different from the average wild cat. Wild cats tend to be solitary, while housecats and domestic cats that have gone feral are usually sociable. Wild cats tend to be more high-strung and hyper-alert, whereas many housecats are relatively easy going. People would have preferred friendlier, calmer, more playful cats, and so these individuals were favoured and fed. Better-fed cats dwelling in close proximity to other sociable cats would have lived longer and had more opportunities to pass their kittenish genes on to future generations.

The famous modern example of this is the Russian fox experiment - the friendliest foxes on the fur farm did not get made into coats but were kept for breeding stock. The result is foxes that look and act like juveniles their whole lives. They are very cute and per Youtube make good pets. 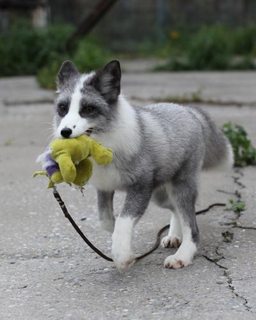 I suspect that some companion cat breeds (examples Scottish Fold, Exotic shorthair) have been bred for neotenous behaviors (sociability etc) in addition to skeletal mutations that make them attractive - and not coincidentally more juvenile appearing.

This is what you will do with the big cat of your choice. You will select for friendliness and playfulness into adulthood. You might need a fairly large breeding stock. A byproduct of this endeavor will be many beautiful fur coats. You could also select for skeletal mutations to produce a cute flat juvenile appearing face. 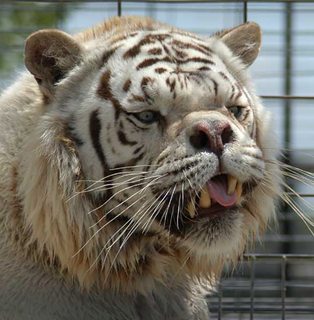 Ok maybe not that.

Cats domesticated themselves because the humans had these granaries with that lovely supply of mice. Eating it required tolerating both humans and other cats.

If there were some kind of large prey animal concentrated around human settlements, perhaps the same thing could happen.

How (completely) domesticate big cats while keeping them (as they are)

(This is actually a comment on Willk's answer, which got out of hand)

Sure, you can breed a tiger 16 generations, let it be an adult-size baby tiger and let it look like a guinea pig, anything goes with breeding.. it will lick your hand.

But does size matter, when the tiger is otherwise completely unarmed ? With these breeding procedures, do you end up with a real tiger ?

Real tigers are big and may come in handy. Tigers look dangerous. Yours too. Get used to it. One of the appealing aspects of having tigers around your house: don't expect any unwelcome guests. Your enemies will be afraid to enter the house. To keep your tiger your friend, raise it, feed it (spoil it) and hug your tiger, so it knows your smell and your relatives smell. Most important advice: forget a long time contract. Don't even attempt to lock it up, you won't be able to. Let your tiger go, when it meets a partner. Also, you'll have to free your tiger well before you go out for travel.. Your furniture really won't survive a spoiled tiger ! 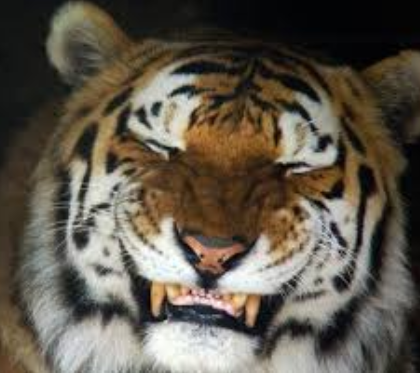 Not the answer you're looking for? Browse other questions tagged biology evolution fauna .

18
Are there any big cats that can survive in a primarily desert area?
21
How could cats evolve toxic claws?
5
How would a big cat evolve to climb on and jump between ruined modern buildings?
6
How big can a giant get before losing human level intelligence?
6
Explaining Anthropomorphism In Later Development
1
How do we breed cats that can talk?