Could a greek or roman boat be blown to the americas in a storm?

This question prompts me to evaluate the possibility that the romans or greeks could be blown in a storm to the Americas and survive if they had enough water provisions?

Or maybe not provisions but expertise of some sort to survive the long journey? Is this possible (even if very remotely).

This is possible, but rather improbable.

Ancient vessels were very lightly constructed, the usual practice to build the shell of the boat first and the insert ribs and framing, and warships like a trireme are actually very lightly built, so the oarsmen can bring it up to speed rapidly, execute complex manoeuvres and so on. A large storm would be a grave danger to such a ship, and at the first sign of heavy weather the captain wold most likely order the ship to be beached in order to be safe. Since ancient ships also spent most of their time sailing close to shore, and generally beached at night, it would be very difficult for a storm to really pul a ship out to sea. If a ship was to be caught in a storm, then the most likely outcome would be the ship would break up and sink.

Triremes had the added disadvantage of having large crews packed in a very small space, so there was not a lot of on board supplies. Water, in particular, would be a huge issue, and a human being will die after three days without water. A trireme would have over 100 people on board, and contrary to the movies, these were all highly skilled crew members, not slaves (a slave on the oars of a tightly packed rowing bench could cause disruption by not being able or willing to keep up with the ever changing rhythm of the oars as the ship manoeuvred). Throwing the oarsmen overboard to conserve supplies would be problematic, especially since they outnumbered the rest of the crew by a very large margin. A ship adrift under these conditions would probably see a large percentage of the crew die due to thirst, or in a bloody mutiny.

A more probable scenario is a "round ship" carrying cargo and a small crew of professional sailors being blown off course and ending up in the Americas. Since the ship is larger and more stoutly built, it is more likely to survive a storm, and since the crew is small, they can make the supplies last longer (and indeed they may be able to pillage the cargo for extra supplies). Once ashore, they also have the advantages of having trade goods to establish communications with the natives, and sailors in those days would normally also be traders, so able to make sharp deals once ashore.

If they were in the Mediterranean (their usual territory) then I would say not without divine intervention.

If they were in the Eastern Atlantic, perhaps off the coast of Spain or Morocco, then I think it could happen. People have survived adrift for very long periods. Steven Callahan survived for 76 days adrift in a life raft. Richard Van Pham survived for three and a half months adrift in a sail boat without a sail. That's more than long enough to cross the Atlantic: 3000 miles at 3 knots would take about 40 days. A boat with a crew would have even better prospects with more options (resorting to cannibalism for example).

The boat and crew would be extremely lucky to survive it but it would not be impossible. They would probably not be in good condition if they did.

They would most likely arrive on the north coast of South America or the Caribbean because of the usual winds and currents. In the North Atlantic, winds tend to blow west to east but the trade winds near the equator are usually east to west. 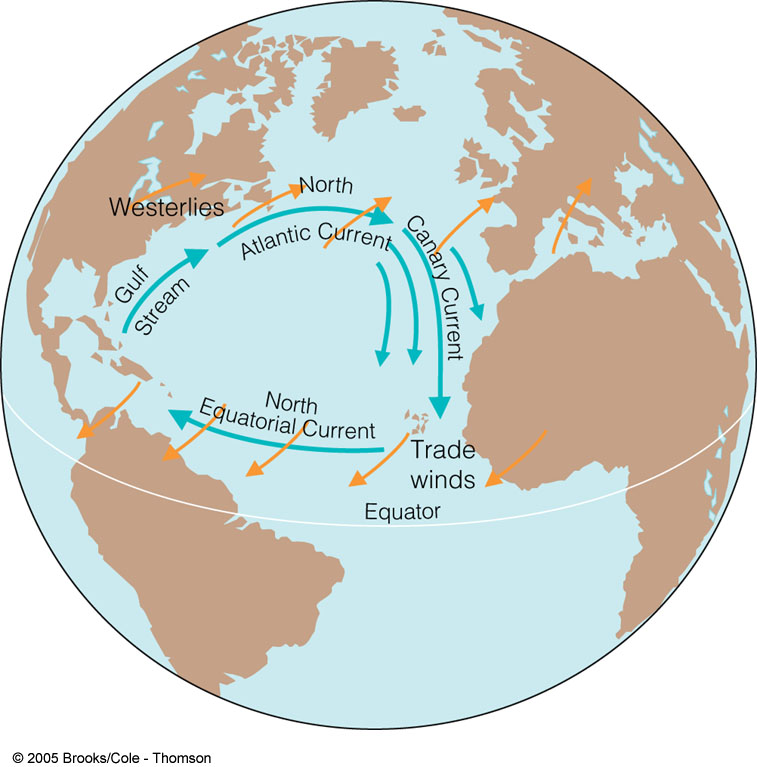 In 1969 Thor Heyerdahl crossed the Atlantic in a papyrus boat similar to one he found on Egyptian pyramids. He was attempting to prove that Egyptians could have colonized the Americas.

Not the answer you're looking for? Browse other questions tagged reality-check hard-science navigation or ask your own question.

34
Could the Romans have colonised the New World?
11
How long would it take for the Americas to reach Renaissance-level technology?

10
What is the highest pressure any life form could theoretically survive in?
2
What is a mechanism to remotely generate a derecho?
4
Artificial water planet and shell world combo
12
How could an acid-cow make a barrier against acidic milk by synthesizing PTFE, and what would it line?
7
Siamese Twin Planets?
24
Is it possible to bind multiple ships together on open water?
6
Is there a safe but weird distance from black hole merger?
25
Why would a compass not work in my world?
4
Could there be a star where humans could survive for a short time?