Is it possible to engineer a sperm whale into a submarine killer?

Set in the late 21st century AD, tensions in South China Sea is high, especially since China already constructed its third nuclear aircraft carrier. During the last decades, mishap and tragedy occurred frequently near international water shared by Philippine and China. There have been many reports of broken arrows in the troubled water, and many nuclear subs owned by both China and US come close to a nuclear catastrophe. While the Chinese are developing stealthier and quieter submersibles running on electricity, the Philippines and the US turn to taming nature's most skilled diver, the sperm whale. My question is, in order to search and destroy a submarine, what kinds of weapons are needed to arm the sperm whale? Particularly, how do you train the animal to search for enemy submarines?

Right off the bat, I'll note that animals can be curious. If a sperm whale sees a submarine, s/he may approach it and investigate. This happened to a scientific submarine earlier this year (although the research submarine was much smaller than a typical nuclear submarine!). I found another story about a whale being even more aggressive, but a five-second skim convinced me that it was a spoof.

How could you get a sperm whale to find a submarine? Well, first you have to get the whale near one. I've modified an image of sperm whale breeding grounds to note the main sperm whale distributions near the South China Sea: 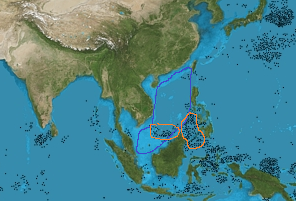 I've circled the South China Sea in blue, and identified two sperm whale hotspots in orange. On the whole, the sea appears to be relatively sperm whale-free, with the obvious exception of areas firmly in Filipino/Indonesian waters. I assume that the confrontations will take place in international waters. Here's a map of territorial claims in the South China Sea:

Chinese claims do not appear to extend towards the central western edge of the Philippines, where sperm whales are prevalent. This makes it clear that any confrontations will likely be to the west. Therefore, for the whales to be of any use, they must be lured there.

Populations are denser close to continental shelves and canyons. Sperm whales are usually found in deep off-shore waters, but may be seen closer to shore, in areas where the continental shelf is small and drops quickly to depths of 310–920 metres (1,020–3,020 ft). Coastal areas with significant sperm whale populations include the Azores and the Caribbean island of Dominica. In Asian waters, for examples, whales are also observed regularly in coastal waters such as at Commander and Kuril Islands, Shiretoko Peninsula, off Kinkasan, vicinity to Tokyo Bay and Boso Peninsula to Izu and Izu Islands, Volcano Islands, Yakushima and Tokara Islands to Ryukyu Islands, Taiwan, Northern Mariana Islands, and so on.

I modified this Wikipedia image to show the area in more detail: 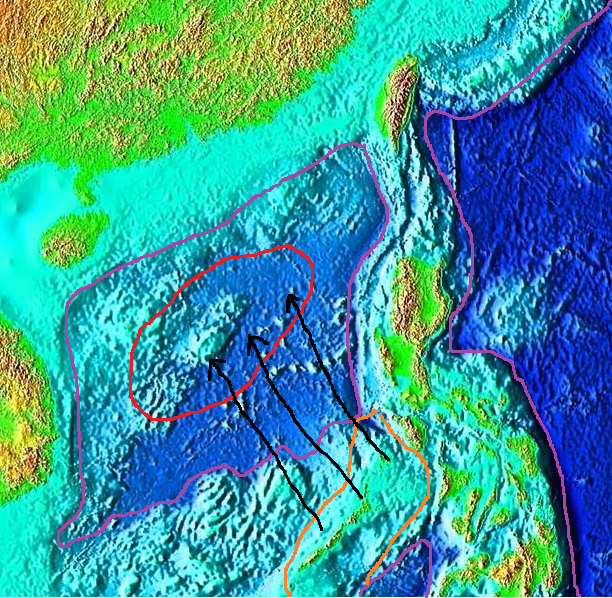 Image modified from this Wikipedia image, courtesy of Wikipedia user Rex; however, the image is in the public domain. Modifications consist of adding in freehand colored lines using Microsoft Paint and cropping the image.

Here, purple indicates what I think is the edge of the continental shelf, orange denotes sperm whale grounds, red denotes the target area - right in the middle of China's claims - and black shows the paths the whales need to follow. I don't know how long the paths are, but I do know that they're pretty long. I don't think that the odds of forcing a significant amount of sperm whales to go that far are too good.

Assuming you get a large amount of sperm whales into the red area, though, could they successfully attack a nuclear submarine? It's something of a tough question to answer, given that the technology is decades ahead of the present day. I'll try to extrapolate based on the toughest nuclear submarines we currently have. The Ohio Replacement Submarine (I'll abbreviate it as ORS-class) seems like a good choice, as it is expected to remain in service until about 2085. Who knows - perhaps this is one of the submarines the United States uses in this scenario! True, the whales will be attacking Chinese submarines, but their advanced ones are either still in early development stages or currently in use and most likely not active in the late 21st century.

This pdf (linked to in Wikipedia) gives a good overview of ORS-class submarines. The submarine will have

The bit that worries me is the fourth bullet I listed: stealth. Submarines are generally considered "stealthy" because they can go deep underwater, where it is harder to track them. I'm unaware how deep ORS-class submarines can go, although it seems likely that sperm whales could go just as deep. That said, I assume that more measures are being taken to make these submarines as stealthy as possible, making them hard to find.

Assuming a sperm whale could find a submarine, could it attack it? I say no. Take the hull, for example. The hulls of many nuclear submarines were/are made of HY-80, or some variant thereof. Some basic statistics correspond with Wikipedia's yield strength figure of 550 MPa (note that materials will not snap, break or be punctured at their yield strength). That's enormous - 550,000,000 Newtons per square meter. Sperm whales themselves can weigh up to about 410,000 Newtons - peanuts in comparison! I doubt they would have the strength to seriously damage a nuclear submarine.

A sperm whale could be taught to hear and respond to sounds, so if they were equipped with sonar then they could respond to a sound and swim towards it. Even better is if enemy subs returned a unique sound which notified to swim closer and attack, while a friendly sub/ship would indicate to swim away or not attack.

As far as weapons, a sperm whale is not magnetic a submarine is. This sounds a bit wacky but wrap the whale with a belt that holds magnetic mines. On the expose side have a magnet more powerful then whatever holds the mine to the belt.

The whale could hear a sound swim toward and nudge the sub allowing for the mine to attach to it. Once the magnet is activated it emits an over riding sub for the whale to swim away allowing it to then detonate safely and not take the whale with it.

Not the answer you're looking for? Browse other questions tagged biology technology warfare weapons underwater or ask your own question.

4
Is it possible to transform Jupiter into micro-star?
32
Is it possible to make spaceship very difficult to reverse engineer if you can't oversee its usage?
16
Is it possible to have a Society to evolve into a industrial age society without discovering gunpowder
8
Is it realistic or possible to implement the loading mechanism of a shotgun into a crossbow?
1
Sperm Whale Hunting Colossal Squids
9
Would it be possible to keep a whale alive whilst harvesting its fat?
2
Is there a possible way that humans could experience rapid physical transformation into something more animalistic?
4
Is it possible for a creature to change forms by turning into a liquid then a solid?
19
Would it be possible for hunter gatherers to accidentally colonize an exoplanet, from an asteroid knocking a rock containing a cave into space?
3
What is the possible way for internet to evolve into immaterium?