With FTL technology is it possible to leave after another and yet arrive before it?

There's a plot point in my script that has been bothering me for a while. My story has faster-than-light travel thanks to distortion engines, which re-purpose the artificial gravity inside the ships to use for acceleration (near neutron star intensity when warping). The ships need to make a trip from earth to an alien planet. The thing is, there's one ship that leaves after the fleet but somehow arrives before them at the destination. The problem is that the ships are of identical design, so there's no tech advantage tipping the scales in favour of the tardy ship.

Perhaps a specific trajectory would allow the tardy ship to cut the line? I am uncertain, please educate me.

... of one fleet leaving after another but arriving at the destination earlier, although both fleets had the same kind of ships.

On 19 June 1798 the French fleet commanded by Vice Admiral François-Paul Brueys d'Aigalliers left the freshly conquered Malta heading for Alexandria in Egypt, carrying an invasion force intending to conquer Egypt and the other Ottoman possessions in the Levant, with a view of opening a French-controlled route to India.

On 22 June, the British fleet, which was at that time was near the southernmost point of Sicily, got word (from a Genoese merchantman out of Ragusa) that the French had sailed for Alexandria. Rear Admiral Sir Horatio Nelson ordered the fleet to Alexandria at top speed, hoping to catch the French while they were still disembarking the troops.

The British fleet arrived at Alexandria on 28 June. The French were not there, and nobody had even heard of any invasion force.

Nelson spent the next month searching for the French fleet around the Anatolian coast, around the Greek coast, and around Sicily; finally, on 28 July the British fleet (which was then somewhere near the Peloponnese) received a notification (from the Ottoman governor of Crete) the the French fleet had been seen at the end of June sailing south of Crete towards Alexandria.

Nelson odered the British fleet to sail to Alexandria again, and again at top speed. On 1 August they sighted the French fleet at anchor in the Bay of Aboukir and the rest is history.

What had happened was that:

(Read all the entracing details on Wikipedia.)

Your typical navigational computers may alter travel paths to avoid areas of unstable gravity variations or massive objects, such as planets or even a random gas cloud. There may be significant levels of caution programmed into the NAVI computer to ensure, to a magnitude of 4-5 standard deviations that there is no impact on the ship while flying this course.

The "tardy ship" could have reasons to override such safety precautions to reduce travel times. They can allow probabilities of detrimental effects to well below recommended levels to cut corners and save time. Instead of steering clear of an object by billions of km, this pilot could skirt to within 100 million km and cut minutes off per maneuver. If dozens of such risky maneuvers are done over the trip, it could cut hours off the travel time, although an increased risk to the ship. but with the absurdly cautious NAVI, these risks are worth it.

Human endeavors require coordination and synchronization. The more people and machinery that are involved in any endeavor, the higher the probability that something gets screwed up or breaks at an inopportune moment. (This isn't fiction; even just skimming military history shows a cornucopia of examples where something going wrong at just the wrong moment changed the course of battles and even entire wars and those are just the incidents notable enough to be recorded.)

Therefore, when travelling great distances, a battle fleet designates a series of rendezvous points along the path where all ships arrive and check in to say that everything is okay before proceeding to the next rendezvous point. Any repairs that needs to be made or cargo/personnel that needs to be transferred between ships (e.g. Captain So-and-so got severe space-food poisoning and needs to be transferred to a hospital ship or one ship didn't have the backup AE-35 unit they normally carry because the supply corps couldn't find one before they left and their main one, of course, chose this time to burn out) occurs at these rendezvous points. The commanders and crews handle this crisply and professionally but it still takes a small but significant amount of time for each rendezvous.

A single ship, not having to coordinate with anyone else, can take a direct route to the destination.

Here's a few ideas I have on that:

The Mechanics and Limitations of Gravity Drives

When your fleet leaves it can not just have all the ships turn on thier gravity drives to 100% and expect everything to be okay. Gravity acceleration is always a balancing act between maximizing acceleration and minimizing gravitational sheer.

So in order to reduce the sheer enough to not kill the humans on board, and achieve an acceleration of ~279560000 m/s^2 like the surface of your neutron star, you'd have to move the gravity focal point ~ a million km ahead of your ship ... but this also means any ship within a million km of you will also feel this same pull... personally, I would suggest you start off with a modest acceleration to try to make your gravity wells smaller and have your ships spend most of their time just moving out of the star system so they don't throw planets out of orbit. Then as they get out into deep space, you slowly ramp up to these higher accelerations.

Why this Makes a Fleet Slower than a Lone Ship

Whatever actual acceleration and focal distance you go for, it will still mean creating a huge gravitational field. So even with ships flying far apart, thier gravity drives will still affect one another. The guys at the back will drag the guys at the front backwards as the guys in the front drag the back guys forward; so, to keep your whole fleet from instantly accreting into one big ball of ships, all ships will have to set various powers and vectors away from each other with only the lead ship being at 100% in the direction it is going, and that lead ship will be slowed down by all the gravity drives going behind it. This means a fleet can not move nearly as fast as a lone ship; so, even if the lone ship has to go around the fleet, it will achieve a much greater acceleration without any other gravity drives holding it back.

While it would be possible for a fleet to spread out enough to have negligible drag on one another, the whole point of operating as a fleet is Concentration of Force. If your ships fly so far apart that they can not support each other, then they are each as vulnerable as a lone ship. 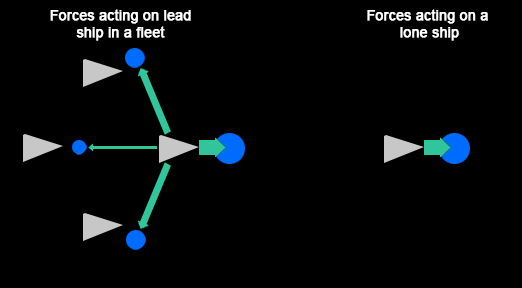 A fleet of interstellar starships is big, and the space around a planet can hold nasty surprises

The planet has a bit of a cluttered environment, with a bunch of moons (both big and small) in orbits with various inclinations, and a thick ring system inside that. You do not want to warp into these or come out of warp in their vicinity.

Since a large fleet needs a considerable amount of separation between ships to keep their gravity drives from interfering from each other and reduce the possibility of ultrarelativistic collisions if a ship goes out of control in cruise, and there are a lot of ships in the fleet, it takes up quite a lot of space in space.

The fleet, being spread out over a volume of space comparable to that of the planet itself (or maybe even more), has to come out of warp and slow to approach speed well away from the planet, so that the individual ships of the fleet can use their onboard radar to navigate down into the safe zone below the lowest rings - the fleet's cruise formation is far too large for them to be able to simply warp directly into the safe zone without crashing quite a few big, expensive ships into the inner moons, the rings, or the planet itself.

The lone ship, though, being vastly smaller than the fleet in cruise formation, can safely warp straight down into the safe zone, saving quite a bit of time.

Any engine has an optimal performance rating, a maximum safe load, and a maximum running speed:

On an interstellar trip the fleet should be running at optimum so they get the most out of every gram of fuel for a ship to break away they can burn their reserve to crank the drive up to maximum safe load maybe even flank if they're more desperate than cautious.

With FTL technology is it possible to leave after another and yet arrive before it?

FTL is Time Travel, unless you take the proper precautions. ref.

If needed, you can have the second fleet arrive before they even left. Star-Trek does it sometimes when the plot needs.

Space isn't static - with bodies constantly moving, and spacetime bends. Even in 'in system' launches, there's certain periods where, taking travel time into account, there's shorter routes. The same way the distance between planets in a system changes as they move, the second ship might have left at a time that resulted in a shorter route.

A fleet with a hundred vessels has just multiplied the possiblity of a FTL drive breaking down by a factor one hundred. Fleets travel together, so if one ship breaks down everyone may have to wait for it to fix it self before continuing. The more ships you have, the more chances for any one ship to fail.

Not the answer you're looking for? Browse other questions tagged science-based space-travel faster-than-light .

67
Are there any ways to allow some form of FTL travel without allowing time travel?

11
What near-future propulsion system(s) could be employed by my spaceships?
14
How well will interstellar ploughs work?
8
How much ice do I need at 0.79c to protect my megastructure
26
With 12th-15th century technology, is a "vending machine" possible?
10
Relativistic Interstellar Combat
5
Invisibility versus transparency. What is possible with plausible advanced technology?
4
I want humans to discover alien communication after they arrive in our solar system, is that possible? If yes then how?
11
Would interstellar space piracy be possible under these conditions?