Extending the lives of indeterminately-growing animals with magic

A serpent developed a connection with a dark deity while living near its temple, and now said deity recognizes the serpent as a pet/living weapon, and with it's followers cares for it.

A species of giant swamp toads has a tendency to "learn" how to bend light around itself to camouflage for hunting and create mirages to confuse predators, which can evolve into the ability to affect not only light, but also empty space for short periods, improving hunting and evading abilities.

There's essentially two components to what the magic needs to accomplish here:

Biological changes to make the animal immune to disease and cancer and allow growth beyond what the species evolved for while still remaining functional.

Secondly the magic needs to prevent deaths from predation or starvation. However the second goal is pretty much trivial, since an animal with bending is laughably OP compared to one without.

If you're not attached to every affected species getting immortality, then you can include the bending part and let evolution do the rest: Since bending would select for a long lifespan, because it can eliminate normal metabolic constraints and allow for a creature to have many times as many offspring.

Thus bending would naturally push affected species towards taking advantage of it: Until eventually many species will only reach sexual maturity after 100 years. At which point some simple organisms like tube worms might evolve to switch to focusing entirely on reproduction and begin generating their metabolic energy directly through bending.

Every bending ability described is quite powerful, but what animals learn is unpredictable. So in animals that can't gamble on a miniscule fraction of their offspring surviving there will be a strong selection for intelligence.

I expect staying dormant for most of the first century of life to become extremely common. Moreover I anticipate some species simply evolving eggs that can stay viable for a century because of the huge advantage that would provide.

The square cube law is basically the thing that says that as an object grows in 3 dimensions, the toughness of any part of it is determined by a 2-dimentional cross-section.

The biggest danger of indeterminate growth is that you will quickly become so big that you can no longer support your own weight and some very important part of you crushes ending your life; however, the are ways to ignore the Square-Cube Law.

One way is to scale up so that height scales much slower than length or width. Your snake body plan for example can get much longer, and only a little bit taller. So by the time any part of the snake is tall enough to get the cross-sectional weight of a normal large animal, it could be a hundred of meters long.

Another option is an environment that supports the whole body. Water for example allows for very large animals like whales to exist in neutral buoyancy. Some species of whale can grow to a mass of about 200 tons just fine. Another similar option could be living underground so that all of your parts are supported locally like the roots of a tree: so you could picture perhaps some sort of giant underground squid or jellyfish that covers a large area and has tentacles that protrude just to the surface to act like a bunch of sperate ambush hunters, or perhaps it is a herbivore that grazes on all the vegetation that grows above it.

Beyond the square cube law, the second biggest obstacles will be food and circulation. Many body plans have 1 mouth and 1 respiration point which can lead to very long and inefficient systems in megafauna. So a creature that grows multiple local digestive and respiratory systems may be able to get bigger providing it can find a food source to meet its feed to its many mouths.

So... basically, your biggest of the big mega fauna will end up resembling some sort of Lovecraftian horror. 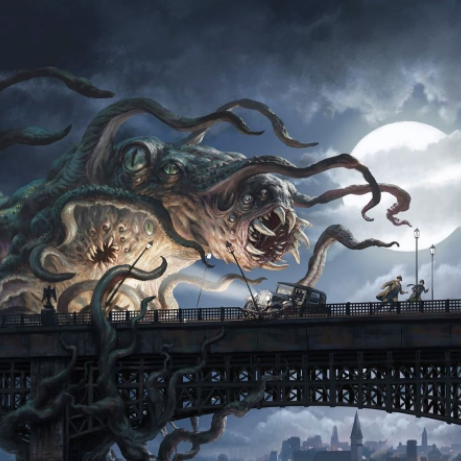 Not the answer you're looking for? Browse other questions tagged magic fauna .

16
Warfare without Metal
30
Would humankind remain the dominant species in a world with twice as big animals?
10
How to not let magic advance the technology too fast?
2
Explanation as to how 4 species were wiped out close to extinction?
7
Foraging behavior of a forest slime
8
How to trap and kill a T-Rex-like creature?
7
What could I do to stop my people from learning animal husbandry?
22
Realistic Megafauna that preys on humans