Can a new geological material (specifically, a metal) be formed no older than 56 million years ago?

There is an alternate Earth that I've been building and rebuilding for years. The canonized point of departure is 56 million years ago, specifically a Paleocene-Eocene Thermal Maximum that is four to five times longer than in our timeline. So the sophont primates of this alternate Earth, the elves, aren't simians but "xenosimians" of the family Allopithecidae, not Hominidae. Nevertheless, they shared some historical parallels, right down to the interbreeding with the dwarves and a mysterious "Third Race".

Long ago, I asked a question regarding the construction of metal weapons without the use of iron at all. In the answers selection, many candidates have been suggested, and they are:

These are all compelling choices, and ones that would make elvish stonemasonry, weaponry, armory and later construction stand out from those in humanity's time. But the real life problem with those materials is scarcity. There might not be enough for any of them in the world to forge weapons and armor on countless armies of soldiers.

But could such a metal have formed naturally on this alternate Earth at a maximum date limit of 56 million years?

Gonna go ahead and make this an answer:

At the time of answer, the following constraints were in effect:

It's that last one that's particularly damning. Assuming advanced chemistry and metallurgy, there are (as pointed out in the question) a number of alloys that might fit the bill, but all of them require chemical or physical refinement and careful proportional alloying. Most alloys do not form in nature, due to a lack of a) metallic deposits in proximity to one another in the correct ratios, and b) the necessary physical processes to alloy them. Exceptions include electrum (pretty, but displaying none of the properties desired) and meteor iron (already dismissed).

There is no way to "slot in" a new elemental metal under the auspices of the hard-science tag, because there are no open slots on the periodic table. The only place for "new" metals is way off the end, and the molar mass of those elements means that "lighter than steel" is definitely a non-starter.

Carbon fibre kind of fits the bill, being lighter and stronger than steel, but you'd have to do some rapid handwaving to suggest a biological process that could produce it and the resinous matrix required to make it useful as armour or construction material. And, of course, it's not a metal.

Given the constraints, I don't see any way to make a suitable material naturally-occurring. 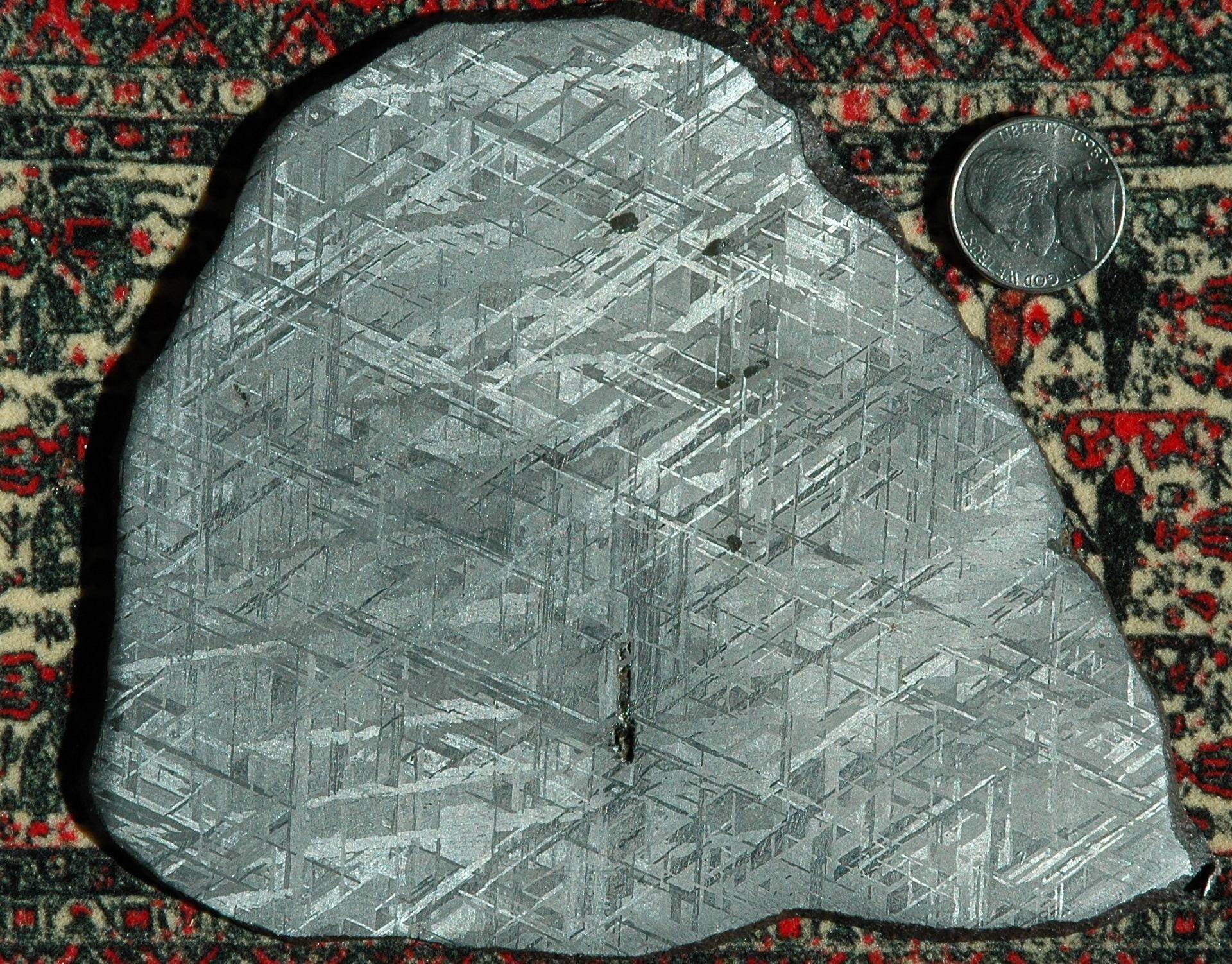 Sawn, polished, and etched slab of the Gibeon (IVA) iron meteorite. Gibeon has a finer Widmanstätten pattern than does Campo del Cielo. Widmanstätten patterns only occur on sawn, polished, and etched faces of an iron meteorite. They do not occur in stony meteorites. The linear lamellae are intergrowths of crystals of kamacite and taenite. The crystals are large because they cooled slowly over millions of years in the core of an asteroid. One consequence of this slow cooling is that iron meteorites do not easily bend or break unless they are badly rusted.

56 million years is not very long in geologic time. So if there is going to be a metal unique to this variant earth, it is going to have to fall out of the sky. Fortunately there is metal that does that!

Your elves do not smelt the meteor metal. That would ruin the huge space-grown crystals and make the metal weaker. The elves carve the meteor blocks into what they need using garnet-coated rope saws. Fine work for tools is done using sapphire chisels.

Monel - a Nickle / Copper alloy common when high-strength and high-corrosion resistance are required - has been identified in meteorites.

Virtually any combination of metals is possible in a meteorite - in fact, as an example, Iridium is very, very rare on Earth because it is so dense that most of it sunk into the core when the Earth formed. Iridium is commonly used to identify and date large meteorite craters because it is significantly more common in space than on Earth.

Iridium could Be the Answer

I intended to suggest that your Titanium Alumnide was supplied by a space rock, but now that I've pulled up the wikipedia page for Iridium I think that might be your answer.

Iridium is among the hardest, densest, most corrosion resistant metal identified. If your elves could find some way to work it - or if the meteor impact simply provided roughly weapon shaped shards for them to use - they could have among the best swords and maces physically possible.

Iridium is so rare and hard to work with, we don't really have a good understanding of its alloys or their properties: you're probably good to make up a wonder-alloy and no one will be able to call you out on it until we start mining asteroids in bulk.

9
If Earth Were Forged by Fire and Ice
6
Feasibility of life/existence of a world devoid of transition metals
6
Super metal and the construction of knight weapons
6
Non-Iron Skyscraper Framing
3
Would a Longer PETM Save the Creodonts and the Mesonychians?
2
Consequences of a Longer PETM: The Lysocline
9
What factors would limit the size of an ancient wagon and how big could they get?
5
Which Non-Iron Elvish Steel Would Make A Good Stonecutting Tool?
2
If these famous fantasy metals are real-life alloys, what would they be made of?