Is there room for a secondary circulatory system within a humanoid?

Specifically, would there be room within a proportionate humanoid body for a complete duplicate of the circulatory system to grow from birth?

No cell in the human body is more than two cells distant from a blood capillary.

Everywhere that blood is delivered to (except the CNS) also accommodates lymph capillaries.

It sounds like the space around cells is already pretty occupied. Since you want your system to provide something to cells in the same way that blood does (I'm assuming), then proximity is very important. Your system and the cardiovascular system both have to have very short, permeable distances to every cell in the body.

This will be the main difficulty in proving that your new circulatory system can exist. How can it service everywhere it needs to without pushing cells in tissues too far apart? Regarding your titular question, I sadly don't think it's possible to add another capillary system without changing something about the way the body already works*.

Fitting in your larger vessels and organs is actually very realistic. The heart has dimensions of about 5 by 3.5 by 2.5 inches. Between one and three in ten people have an extra spleen (supernumeracy, the physical condition of having additional organs or body parts, is extremely common). A spleen is normally about 5 by 3 by 1.5 inches. Although smaller than a heart, this is just one example of supernumeracy I grabbed at random from the first Google result. I think it proves the body's more than squishy enough to accommodate a lot more than you'd expect without noticing.

* For example, a new blood capillary layout that aligns with yours to optimise cells reached from each system, and/or sparser initial lymphatics, leaving space for your system's capillaries, and relying on superhuman lymphangiogenesis for clearing out extracellular fluid when it matters.

There can already be considered to be a secondary circulatory system in us humans: the lymphatic system

The lymphatic system, or lymphoid system, is an organ system in vertebrates that is part of the circulatory system and the immune system. It is made up of a large network of lymph, lymphatic vessels, lymph nodes, lymphatic or lymphoid organs, and lymphoid tissues. The vessels carry a clear fluid called lymph (the Latin word lympha refers to the deity of fresh water, "Lympha") towards the heart. 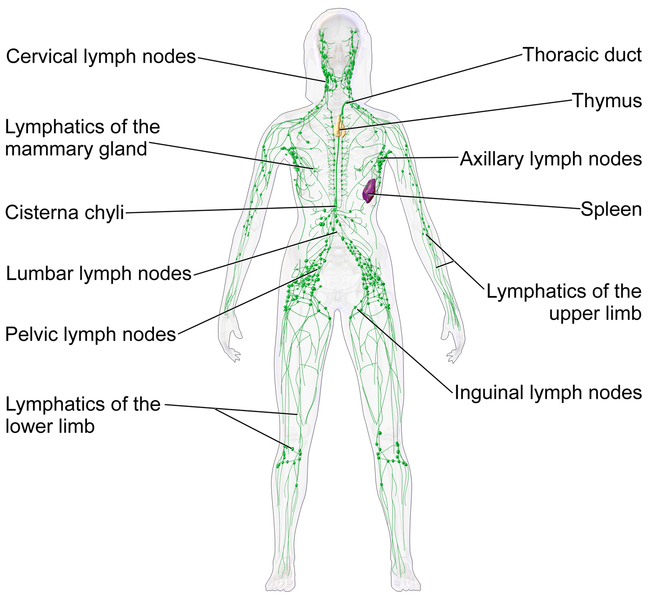 Moreover, consider that an adult has about 5 liters of blood, in a total body volume of about 80-90 liters. Adding another system which takes the same volume seems possible.

It depends on what exactly you mean by circulatory system.

The short answer is that if you mean just a heart and the blood-carrying vessels, then maybe in a slightly larger than average human, since 'normal' human size varies widely, and since, if we keep proportionality the same, a little extra height means a lot more internal volume (cubic relationship). A man with large muscles could have part of those muscles actually be more blood vessels, which would give them a more red tint, and sacrifice raw strength for endurance.

The long answer: The human circulatory system includes not just the distribution (i.e. pump and tubes - heart and blood and lymphatic vessels), but also the input sources: for cells in the fluid itself (created from bone marrow and for infants, the spleen), nutrient (i.e. the interface with the gut to dissolve nutrients in the fluid), oxygen (the entirety of the lungs to provide oxygen for the cells to carry), and the waste management system: Kidneys - the filter/sieve to remove waste and recycle what it can, and the lymphatic system, which transports filtered blood plasma from the space between cells back to the blood supply for reuse.

For a disconnected one-to-one copy of the entire circulatory system (until the oxygen and nutrients diffuse out of the vessels to actually be used by cells), you are looking at 4 lungs, 4 kidneys, 2 hearts, production sites for any cells the second fluid, some kind of recycling system like the lymphatic system that somehow does not mix with the regular lymphatic system, and of course, all of the vessels to transport it. Which I think would be very difficult to fit. Even for just the vessels, even if they fit (volume-wise), the bones may have to be more porous to allow the space for twice the vessels.

For just a heart, yes. Probably. Assuming mass is distributed relatively uniformly throughout the volume of a body: Women have (very uncommonly) given birth to full-term, live, healthy babies without even knowing they were pregnant (though probably thinking they were super bloated and with an unhealthy amount of denial). Slim women too. The average weight of a newborn is about 3.5kg, and the average weight of a woman is about 77kg. Which is about 4.5% of their body mass. This is a minimum, because a large proportion of the weight gain while pregnant is all the non-baby baby stuff (amneotic fluid and placenta). This is also all in a relatively concentrated space (in the womb), rather than distributed around the body. Keep in mind as well though that even with most women being very obviously 'expanded' while pregnant to account for the extra space, all the rest of their organs are very crowded to the point of being uncomfortable and less efficient (e.g. squished stomach, bowel, lungs requiring frequent food and toilets and causing difficulty breathing). Also keep in mind that humans are generally less dense than water and that blood is mostly water. Which means that blood is some of the densest stuff in your body, and that x% weight gain in blood equates to less than x% volume gain. Based on this I would say that 5% increase in mass is a conservative estimate for the minimum a human can gain in weight without an obvious change in how they look (if it is mostly in blood, and is well distributed). A normal human body can be up to 10% just blood (by weight), let alone all the other stuff.

You could make some allowances. E.g., we have two kidneys and only really need one. So you could dedicate one kidney to the other blood supply. Similar is true of the lungs. Keep in mind though that if the second circulation system fulfills some purpose other than the purposes that the first one does, they would have a much diminished capacity to deal with toxins, including alcohol, and would have low oxygen levels in the blood, which would cause fatigue, among other issues.

Your left lung is also about 2/3 the size of your right lung, to make room for your heart. So if you had a second heart do similar on the other side of the chest, the other lung would also need to be smaller.

If you make the allowance that some organs can serve both, e.g. kidneys can clean blood1 and blood2, keeping any differing properties separate, that could help. If the second system is not for transporting breathable gas, then you wouldn't need extra lungs for them.

In theory, a fluid pumping organ could work similarly to a roller pump or the bowels, where the tube containing the fluid is squeezed at multiple points simultaneously which move along the length. A heart like this allows for it to be almost any shape to best fit in nooks and crannies, and could function with or without a heart 'beat', since it could pump continuously rather than with opening and closing one-way valves.

If you could fit a whole second system in the same size, an implication would be that they would be a lot more dense, and find it difficult to float.

6
Can human body systems be implemented into a robot [Muscular + Skeletal systems]
5
Is a double circulatory system useful?
8
Creating a scientifically semi-valid super-soldier, part 5: Heart and circulatory system
12
How CAN we scale up living creatures to be giant sized?
28
Best spot within a human to place redundant heart
4
Feasibility of a tree with a circulatory system
3
Could an animal have more than one heart?
2
How could an efficient circulatory and cardiovascular system evolve for giant arthropods?
1
What would the effects of a muscle-wrapped mesh of a circulatory system be on a human?
7
How long and heavy can a tentacle tail get relative to the animal it's on?