What types of enemies would a two-handed sledge hammer be useful against in a medieval fantasy setting?

Right now, I'm looking at the two-handed hammer, something that would be unrealistic/impractical in our world. I always thought the Paladins from Warcraft III with those massive hammers were cool and wanted to have a two-handed hammer in my setting.

I won't be using something quite as big as what you see the Paladins of Warcraft III using since those are a little overkill, but instead using some of the slightly more sensible two-handed hammers from World of Warcraft as an example/reference.

Here's an image of the size of weapon I have in mind as the size of a typical two-handed hammer: 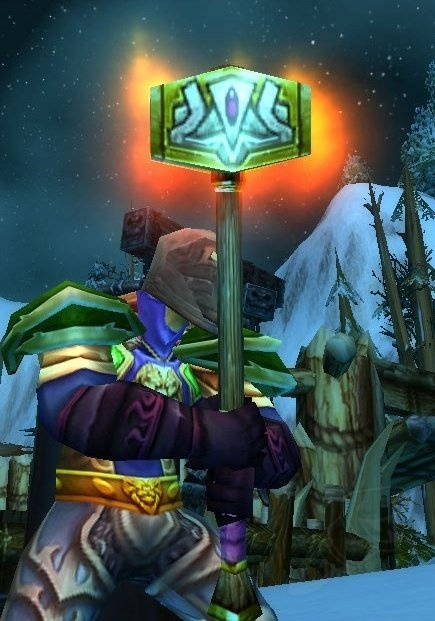 In the setting I'm working on, I intend for these weapons to be wielded by people who are much stronger than humans of our world, through some combination of natural strength, training or magic, since such a weapon would be unwieldy in the hands of a normal human.

I'm trying to think of what kind of situations such a weapon would be useful in, assuming they were used by those strong enough to wield them. A few thoughts come to mind; crushing armour by overwhelming force or clearing large numbers of brittle or frail opponents and maybe demolishing structures?

This might also help. In my RPG, I plan to split physical damage into three types: slashing, piercing and bludgeoning with everything having different balances in defences between the three types. Some weapons will have multiple damage types through different attack types while some focus on one over the others. I see the two-handed hammer as being a highly specialized weapon where bludgeoning force is the best way to dispatch a foe.

Sledge hammers and other sorts of two handed blunt weapons were not used a lot in war because people even in full plate armour could easily dodge such heavy weapons.

So, you need an enemy that is mostly invulnerable against swords and arrows and such, and which isn't fast enough to dodge a slow and heavy weapon. Trolls? Giants? Siege equipment? Lots of options.

Taken from my answer here: Why would a regiment of soldiers be armed with giant warhammers instead of more conventional medieval weapons?

Lead mallets were a European favorite. I knew the archers at Agincourt had them but figured that they had them to pound in stakes, so used them to pound on knights later. But apparently these weapons were made in bulk for arming masses. Sometimes the masses armed themselves with the mallets for their own reasons.

Lead mallets were also used by other infantry. The Paris rioters that broke into the Hôtel de Ville in 1382 seized so many lead mallets that they became known as Maillotins, and as a result we have a useful illustration of the weapon in an illumination of the revolt, above.

The first insurrection was that of the Paris mob, and was sparked off by a costermonger who, when an official tried to levy a tax on the fruit and vegetables he was selling, began to roar "Down with the gabelle!" At this cry, the whole populace rose, ran to the tax-collectors' houses and robbed and murdered them. Then, since the mob was unarmed, one of their number led them to the Chatelet where Bertrand de Guesclin, a former High Constable, had stored 3,000 lead-tipped cudgels in preparation for a battle which was to have been fought against the English. The rabble used axes to break their way into the tower where these cudgels or mallets (in French, maillets) were kept and, arming themselves, set forth in all directions to rob the houses of the King's representatives and in many cases to murder them.

This site has awesome stuff on lead hammers as used in battle. Also some fine Chaucerian English descriptions of "awesome thwacks" and the like.

I think in addition to being cheap to make, easy to store without fear of rot or rust, and free to maintain, huge hammers can be used effectively with a minimum of training. Civilians pressed into service would be familiar with swinging axes and hammers. But your folks train with the hammer so that would be less of an advantage.

So why would the fact that they are inexpensive be helpful? I can think of a reason. These guys go thru a lot of them. Your soldiers are so strong that they routinely break hammers in use. A soldier might go thru 4 or 5 in one battle. That would not be sustainable with swords, but there are a lot of spare hammers so it is ok. If they win, a couple of them will go around with big baskets and collect the broken off hammer heads for reuse.

Two-handed maces have a lot of mass compared to other types of weapons. Kinetic energy is governed by $KE$ = $1/2$$*m*$$v^2$, so in theory it's better to use a lighter weapon that you can move more quickly.

In practice, there are are physical and limits to how quickly a person's arm can move: a golf ball weighs more than a pebble, but most people are strong enough they have no difficulty throwing a golf ball as quickly as a pebble. Fighting style aside, energetically speaking it's better to use a weapon that you can move at or near the limits set by your limbs.

For similar reasons, it's easier to block a lighter weapon. A fighter with a shield turn away a sword strike (however strong the foe) without too much effort because the sword is lighter and therefore has less $KE$. A mace or maul swung by a burly foe will take more effort to block, and sufficiently strong foes or repeated strikes will damage the shield or armor.

Attacks with heavier weapons will be slower and can be dodged, and with sufficiently strong foes this will be the only practical option - football players may block a charging linebacker, but they won't go toe-to-toe with a car. Since the strongest foes will move heavy weapons at similar speeds to light weapons, this speed advantage diminishes as strength scales up. In the extreme, it's like fighting somebody wielding a rapier, but the defender is only able to dodge.

...except maybe in contests against an equal foe

When pitted against an equally-superhuman foe, this advantage diminishes. Staggering their foe with the force of their attacks will not work, so superhuman fighters will focus on the weak link: armor. A superhuman fighter with a sharp sword can shear through plate armor like it's leather. While comparatively-fragile armor won't provide much resistance against a blunt weapon, the beefy fighter's physicality provides more defense than the armor, and the advantage of a more massive weapon may diminish.

Ultimately, it might depend on the weapon's material. A fighter who can shear through plate with a sword will break or dull a lot of non-magically-reinforced swords. A maul or two-handed hammer may distort with repeated blows but will still remain functional up until it breaks.

Nearly everything. Armored foes can do nothing against the kinetic forces generated from such a weapon. At best they'll walk away(try to anyway) with a broken bone or concussion, at worst we're talking ruptured organs and internal bleeding. Not a great way to go. Just about the only thing that'll be able to resist or only bruise from a heavy blunt weapon is an organism or enemy with huge amounts of padding, like walruses or whales or very fat ogre or armour that'd rival the onion armour of dark souls with its supple girth.

You'll not get too much in the way of battle effectiveness out of it. Most mobile enemies will be able to dodge its slow swing, and if it does indeed connect it'll probably only be due to luck or incompetence on part of the enemy. Honestly if spears or arrows or tripping weren't a thing you'll get more use out of it on a battlefield by holding onto its handle and spinning a path around the battlefield like some sort of mad man. Hopefully the chaos you'll create(if you have enough space to get it spinning and can handle the nausea) will take out enough enemies to warrant the tactic. If you can get close enough to a shield wall to use it you may also be able to break through their defenses but you'll open yourself up to being surrounded and whatever surprise shanking awaits you from the broken up group.

I suggest taking hammers to fortifications or barriers and foes too heavily armoured to move with much agility, as other answers have pointed out. 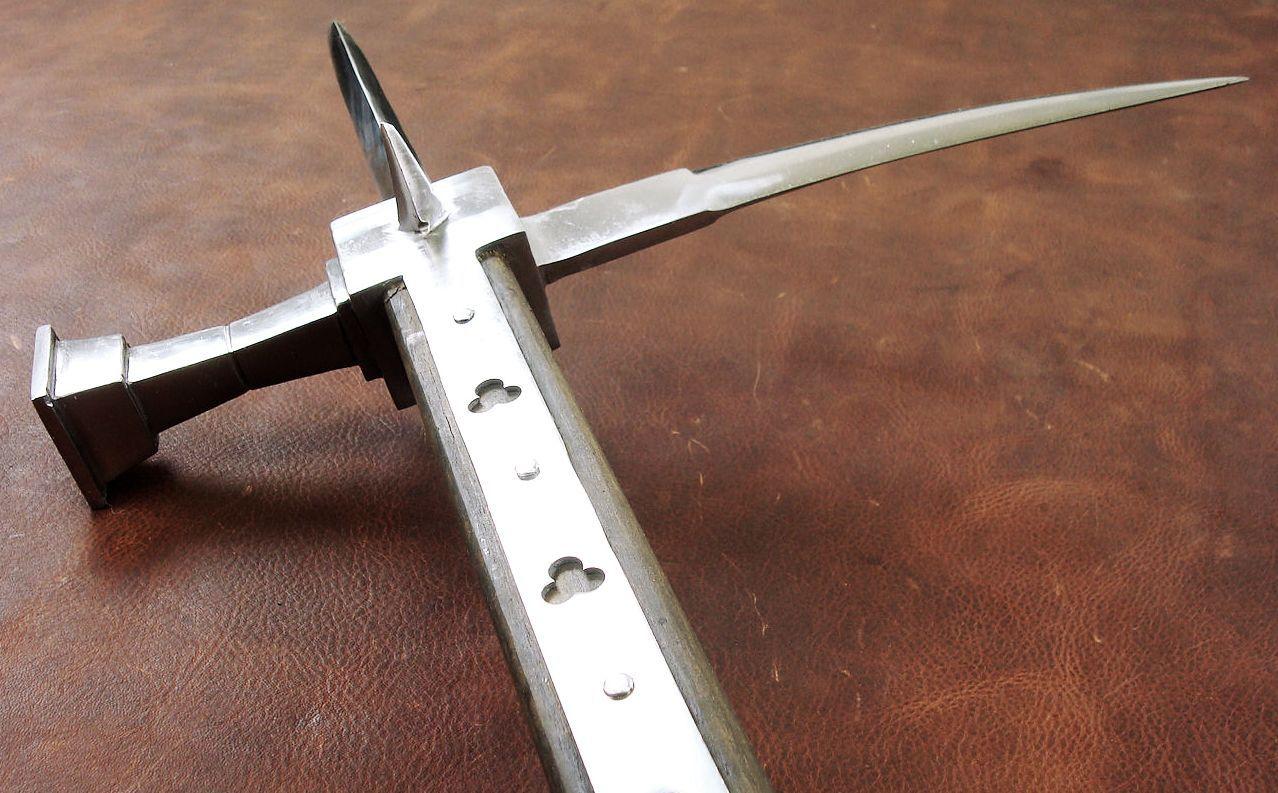 It's a cross between a halberd and a hammer. There's a spike at the business end so it can be used like a spear, a hammer on one side to smash foes in armor, and a sharp beak on the other side to pierce through the armor with maximum violence and then impale its owner.

The hammer in the picture has two identical sides, which means it lacks versatility. This is a rather extreme example of making the two sides very different, so the user has more options. This one would deal piercing damage on one side, and bludgeoning on the other.

This would work nicely against tough skinned fantasy monsters too, since a hit with the beak will penetrate a hard target much deeper than a thrust with a sword, which is the point of this weapon. It will also go over a shield. In order to be fast, it isn't too heavy.

If the armor is struck in a vulnerable place like a joint, the fighter inside could be fine, but the armor could bend out of shape and restrict his movements, or the visor would no longer open, etc.

The hammers are for hitting Iron golems very hard. The goal is not to break the golem in half, but to warp the armor plates so the Golem has difficulty moving. For example you hit the knee so when it tries to move, the shin and thigh plates that meet at the joint grind into each other.

Not the answer you're looking for? Browse other questions tagged weapons combat .

6
Why would a regiment of soldiers be armed with giant warhammers instead of more conventional medieval weapons?

14
How would weapons and armour be affected if metal weight was negligible?
7
Reimagined Weaponry: The Illidari Warglaives
41
How can I explain a one-shot, slow-to-reload laser sidearm?
14
Could the development of a body armour that completely stops any small arms fire make a civilization go back to medieval-style combat?
6
Design for an Extendable Melee Weapon?
21
What kind of weapon would be most useful for a fantasy civilization of blind creatures?
6
how might look and be used the firearm hand weapon for four-handed humanoids?