Evolving animals without an ocean

Approximate equivalents of plants and fungi do just fine in these environments--there is a clear path from single-celled organisms clinging to sand grains to colonies that spread over a wide area as cells divide, to truly multi-cellular sessile organisms whose cells grow and divide in an intentional, directed manner to form rhizome networks, and grow reproductive structures above the ground for spore/pollen/seed dispersal on the wind.

But what about animals? How do macroscopic mobile heterotrophs evolve when there is no sea to support their bodies in the early stages?

[*] I don't expect it's particularly relevant to the question, but for the curious: Native Rust life is packed with deliquescent compounds that suck small amounts of water vapor out of the air to maintain a super-salty, but liquid, intracellular environment, with energy metabolism based around hydrogen peroxide as an oxidizer and hygroscopic agent. Native Cannonball life, on the other hand, absorbs iron from the soil and CO2 from the air to photosynthesize iron pentacarbonyl as an intracellular fluid and energy storage molecule, and decomposes various metal carbonyls to regenerate CO2 and release energy.

A path of relative advantage

What makes an "animal" in alien life? For this purpose, I'll say "something which eats other lifeforms, doesn't gather its own energy". The simplest way to do that is parasitism. I've sketched out one possible series of changes which could lead there, given the right ambient conditions, and if those mutations occurred.

So, let's start with a fungal spore. Now add a few more cells and an outer coating, to protect it from the equivalent of dehydration, maybe some reserve supplies in case nutrients require some deeper roots to extract.

What if seeds regularly land on occupied ground? It will be beneficial to survival to sink roots in anyway and start drinking nutrition, claimed or not. Especially if much of the world is covered in a mat of organisms, this will happen occasionally.

As the world becomes covered in vegetation, this "land on something else" becomes more and more certain. Some seeds develop hooks and barbs which snag in good spots. The hooks and barbs become sensitive, then reactive. That's still not a recipe for animal life as we know it, but we have multicellular braking. Now for mobility.

Day/night cycles may deform some of the hooks periodically. This can adapt into a crude form of push-along, to find the best spot to root. Once that exists, promoting it (then inducing it) biochemically is a smaller step than it was.

Now that we can move, we start shifting lifecycle to let us eat before fully rooting. And we start to keep extra storage on-board until it's time to set seed. Speaking of which, those winds are still around, it'd be nice to be able to re-root if we're hurled away.

Drat, we got too good at draining hosts, and they're turning necrotic where we eat. Some have started forming bark/cycts where we touch. Some of us have a "spreading" mutation, but others just let the wind throw them to the next host.

We're on that thrown-about branch, and those who can periodically stop catching the wind breed better. Especially if they do that when the smell of hosts is in the atmosphere. Of course, we spend our time around hosts, it'd be useful not to go too far if we don't have to. Short-hops and biochemically-cheap drilling-for-sap leave more energy for breeding. Being able to easily catch-and-release feels increasingly like muscle, and drilling like mouthparts.

What if we didn't need the wind, but spasmed our way around independently while it wasn't around? And moved from one host to another, if the first died? What if our seeds could plant themselves nearby - even adjacent - and drink the sap we know is there?

At this point, we have something like an aphid.

We've sucked most of the life around here dry ... but you're looking very energy-dense there. Hold still.

It starts with something resembling a biofilm: unicellular organisms living together discover that there are some advantages in the number, and some evolve to be pluricellular goo.

A biofilm comprises any syntrophic consortium of microorganisms in which cells stick to each other and often also to a surface. These adherent cells become embedded within a slimy extracellular matrix that is composed of extracellular polymeric substances (EPSs). The cells within the biofilm produce the EPS components, which are typically a polymeric conglomeration of extracellular polysaccharides, proteins, lipids and DNA. Because they have three-dimensional structure and represent a community lifestyle for microorganisms, they have been metaphorically described as "cities for microbes". 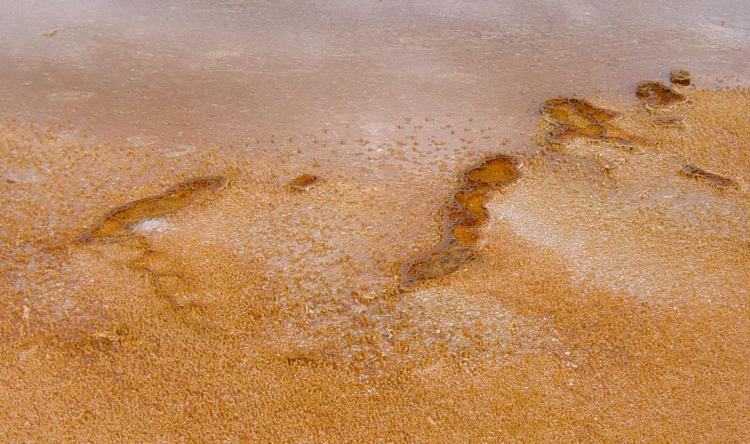 From there some can start developing support structure, which can give rigidity and mobility, in the same way vegetal organisms have developed to be trees starting from grass and seaweed.

However for all of this to happen, there must be an advantage, meaning that for example also the autotroph should take the "big number" path.

Dictyostelid cellular slime molds pull of the neat trick of being able to exist in both unicellular and multicellular modes. When food is plentiful, they exist as individual single-celled amoebae, which can move around on micro-scale surfaces by extending pseudopodia. However, when food becomes scarce, they aggregate into a multicellular pseudoplasmodium, which can be macroscopic in size (up to 4mm long) and moves in response to heat, light, and humidity in order to seek out a more suitable environment, engulfing bacteria and fungi along the way. Larger pseudoplasmodia are capable of moving more quickly, and with more efficiency in terms of slime production (due to lower surface to volume ratio); given a sufficient population in the absence of pre-existing animals, intraspecific competition for speed and resource efficiency, allowing some colonies to travel farther and faster to beat out others for access to new food sources, would thus produce evolutionary pressure towards larger sizes. The ancestor of all complex animal-analog life would thus be something like a minimally-differentiated slug with no distinct mouth, gut, or limbs, which feeds by engulfing its food and directly absorbing prey cells through the skin. Of course, there are a lot of potential means to make that more efficient, so it's not hard to imagine the analog of a Cambrian Explosion in diverse body plans developing from that sort of basic ancestor on many different worlds.

Not the answer you're looking for? Browse other questions tagged creature-design planets evolution .

26
Could an autotrophic civilisation develop, or will evolving life forms always eat each other?
15
Pharbohydrates vs Carbohydrates
13
Feasibility of conventional life evolving an a sub-zero climate
8
Could Bamboos Evolve Into Trees In the Past?
7
Could a plant-like forest or jungle form in an underground lava dependent ecosystem?
17
How could an Earth-like planet develop huge pinkish-purple forests on ocean surfaces?
4
Extremely heterogeneous life
6
Life without a bright star?
6
Can life exist with rigid cell membranes?