Is it possible to induce prions/protein-folding diseases via a magnetic field of sufficient strength?

This logbook entry from Destiny 2 states that

While I'm unsure as to whether Jupiter's magnetic field is strong enough to do something like this, I am interested in the concept. Is it possible for a magnetic field to cause proteins to misfold in a way that makes those misfolded proteins capable of misfolding other proteins?

YT How Much Power Does Magneto Need to Rip Iron from Blood? - pretty entertaining to watch without sacrificing science

Fun fact, mentioned in the clip, moving inside the 7T field of a RMI makes you taste metal (by creating currents in your body strong enough to excite the nerves). Remember kids, if you ever wake up inside an MRI machine that you don't want to be in, moooove awaaaaay sloooowly!

"Human blood and human tissues is in the $-10^{-6}$ to $10^{-6}$ magnetic susceptibility" - that is, ignorable weak. So weak that, before any effects of the magnetic field start to manifest on the protein (and their folding), you will get intensities of the magnetic field that will make the actual chemistry of the elements in your body impossible (by modifying the shape and the energy of the electron shells)

Probably it won't do harm.. at least not very quickly.. a few years ago some mad scientist won the IG Nobel for physics with levitation experiments in a magnetic field. The field applied was a lot stronger than Jupiter's, which is about 470 micro tesla at the equator. It took 16 Tesla's (!) to lift a live frog.. it survived the experiment, 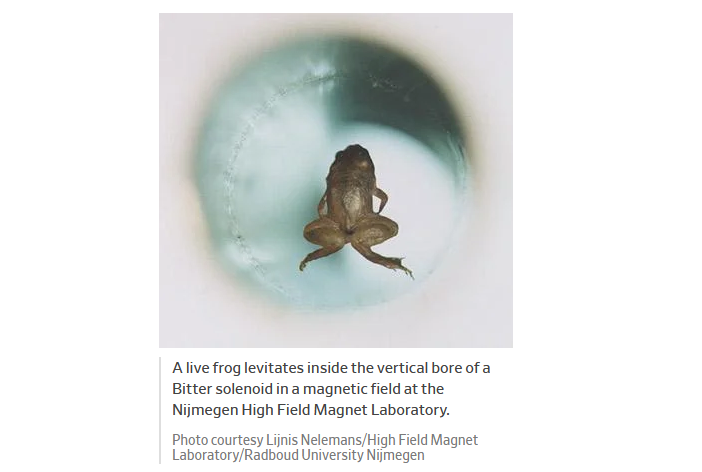 Unfolding a protein it's pretty easy: a change to the environmental condition of that protein can do it, be the change temperature, pH, water concentration, etc.

Unfolding a protein in way that it keeps it active and even capable of transmitting that unfolding to other similar proteins is a completely different game. Since we have prions we know it can happen, but since we don't have as many prions as we have viruses (to the best of our knowledge) it's safe to conclude it is something very rare.

Therefore I doubt a random strong magnetic field can result in the right modification in the right place to achieve this result.

Not the answer you're looking for? Browse other questions tagged biology physics biochemistry electromagnetism magnetism .