Can a supersized collection of tethered large space structures exist?

I wanted to create a main destination/headquarters for each galaxy in my story but a single planet or megastructure didn't seem grand enough.

My idea is to have a vast number of structures from rotating space habitats to non-rotating structures used for storage, computers etc. All structures will be joined together by strong cables to keep them from wondering off or needing to use too much fuel to keep its position.

The arrangement of joined space structures will not be orbiting anything, they will be stationary in a set location far from any celestial bodies that could gravitationally influence them.

Carbon nanotubes, steel and aluminium will be used for the structures and possibly the cables. Nanotechnology is used within the structures for different purposes.

The majority of the structures will have masses between 100 million and 10 billion tons with possibly smaller structures of less mass along the cables. I haven't decided on the size of the whole arrangement of structures, for starters I was thinking that it can be an astronomical unit in diameter but if that is possible then it could be larger.

Consider the trivial case of two megastructures tethered to each other. Their gravity (which may be almost non-trivial, with the masses you're listing) will tend to pull them together--but if you have them rotating around each other, their inertia would easily overcome that pull. You just need to find a sweet spot (probably a very slight rotation) where the acceleration from their gravity nearly neutralizes the centripetal acceleration.

If sufficiently balanced, then in theory the cable holding them need not be very strong. In practice, you would want a big margin for error - especially if there are gravitational fields from nearby bodies that might cause tidal forces.

A wheel of structures

Now, if you want more than two megastructures, this scheme can still work as long as the structures and the cables are assembled in a planar and radially symmetric configuration. The simplest cluster to visualize would be a "wheel" of megastructures - a four of them connected by cables to form a square; or five of them connected as a pentagon; or six of them as a hexagon. As long as they have sufficiently similar mass, the same perfect balancing is, in theory, achievable.

If you want to have irregularly shaped clusters, however - or 3-dimensional layouts, or superstructures with very different masses - these factors would all add complication to the system that will make it more difficult to achieve a "perfect" balance, and you will probably start to be limited by how strong your cables are.

Tubes rather than cables

There is no wind. In space, in 0-g condition, with near-zero gravity of the construct itself, it may be feasible to use a web of rigid connections (tubes) to keep it together, that is lots of metal tubes say 2-4 meter in diameter, between the megastructures, forming a web, or cocoon-like assembly. It is stable, you'd have predictable behavior of the whole construct, the relative position of your megastructure components will be constant, and you won't need to arrange orbits, or handle megatons of centrifugal tension forces. You can use these tubes for pneumatic transport of goods, or even as corridors, for transport of personnel.

In the middle, you could have a megastructure "central station" where most tubes are connected to.

Gravity wouldn't be a big issue.

If you calculate it, assuming 10 billion ton objects paced at 10 kilometers, the force is about the thrust of the Thrust of Saturn V rocket at 60 million Newtons.

Cables don't make force disappear, and that's enough force to snap a lot of cables. You can cable them together if you want, but it won't counteract the forces.

If you have a ring of mass, the net attraction to any one object is fairly low, because it's counteracted by other objects. It's a bit unstable, but it'll be easier to manage.

If you have a sphere, it'll be very stable.

This could reduce fuel costs to that needed to stabilize parts.

You mention Ring World but forget, the Puppeteers Fleetworlds.
Arrange your structures into a Klemperer rosette. The Rosette will require station keeping mechanisms, but at this scale that's not an issue.

A Klemperer rosette is a gravitational system of heavier and lighter bodies orbiting in a regular repeating pattern around a common barycenter. It was first described by W. B. Klemperer in 1962, and is a special case of a central configuration.

Your objects will also be required to have enough mass to exert some gravitational force over the other objects in the rosette. Scaled down enough tubes/cables etc between them is possible. 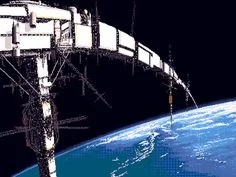 You can have your vast number of megastructures in orbit around a sufficiently large mass. Megastructures can be connected by cables or perhaps they can just have magnetic bumpers to allow some movement relative to one another. You have built an orbital ring. You will still need your strong cables. These have made many appearances in SF and there is a lot about artificial rings on the WB stack.

OK, you don't have tidal forces pushing them around relative to each other, but will have the momentum transfer due to arriving and leaving different modules, and this could systematically built up over time (e.g. visitors always arrive at module A, with the shuttle bay on the side facing away from the cluster; they do their tour and then depart from module B.)

My solution is to not use simple tension in cables to keep them together. The cables — or better yet, conduits that carry utilities or even allow transit — have expansion joints to either slide apart a bit or straighten out a bit. Meanwhile, this acts as a sensor that will trigger active correction.

The correction is not a rocket throwing propellent out into space to be lost forever! Rather, since you have these conduits, you can use them to shift ballast around, or very gently pushing and pulling on each other.

If A and B are moving apart, this will be sensed and even though the cable between them is still slack, it can be jerked to produce an attraction. This could be done by contracting a small section of the cable at a time in a wave that moves from one end to the other; this will transmit the force even though the cable is slack, without having to thrash it around. This can be used to push as well as pull.

If the connecting tubes carry water or feeds for replicators or other material stuff, imbalance in supply and demand might be what causes the difference in momentum in the first place. Intentionally shifting material can correct it. Perhaps water is pumped between A and B to exactly oppose the daily cycle of commuters who go from A to B in the morning and B to A in the evening. In general, such routine activity, whether people commuting or the flow of goods produced and consumed by different modules, can be planned and anticipated, as well. Logistics can try to reduce the net imbalance by scheduling things properly, and avoid having to transfer ballast for no reason other than to make a correction. Just plan the delivery schedule for something that you needed to transfer anyway.

Not the answer you're looking for? Browse other questions tagged reality-check gravity megastructures .

5
Airborne Hotels - Stabilizing and steering a Cloud Nine tensegrity sphere
14
Off-planet energy production - what would be best way to supply this energy planetside?
4
Is a Heliostationary Receiver realistic?
2
How massive can a structure get on the inside of a Mckendree cylinder?
6
How to allow a cylindrical habitat (O'Neill or McKendree) to radiate heat to space?
1
Can you exist in a scaled up universe?
6
How could a galaxy be altered to house hundreds of thousands times more Stars?
2
Would this giant rotating shotgun weapon be effective?
4
How fast could we build a Dyson Swarm?
2
Creating stable gravitationally bound alternatives to a single ultra massive galaxy?