Viability of an amalgam tree

I recently learned of a fascinating art project being developed by Sam van Aken involving the grafting of flower buds onto a stock tree. You can find out more about the project itself by visiting the official website.

In theory, this art project will result in a series of trees that can each produce a variety of fruits. My understanding of genetics indicates that, were the seeds from these fruits be planted, the separate trees would be grown rather than the amalgam tree.

Out of curiosity and a desire to give a whole new flavor to a world I'm working on, I'd like to know if it is conceivable a plant like the amalgam tree in the art project could ever evolve naturally in that it can produce a variety of viable fruits that each produce the same amalgam species.

My hope is for a single forest that could provide all the nutritional needs of a small vegetarian community. It would certainly be a splendid vista, assuming the artist's representation at the linked site pans out: 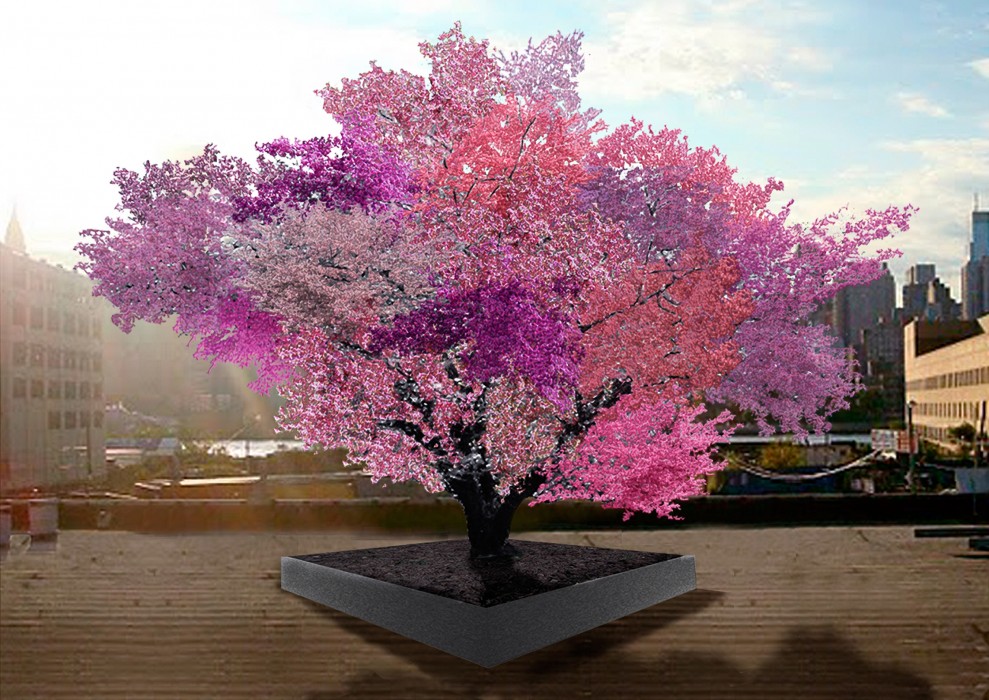 Is it feasible for an amalgam plant to evolve naturally?

One possibility I see is Parasitic Vampire Trees that mug other fruit trees for their genetic codes, steal their fruit, and then replace the seeds with their own. We shall call it Prunus draculus.

Prunus draculus started out as a peach tree that was getting edged out. Losing the evolutionary war to bigger, tastier fruit trees, it by chance lucked into a new strategy. It learned how to cheat.

Developing along with a symbiotic virus, Prunus starts is plan as a Chimera Plant (thank you Samuel). It grows on other trees, then starts slowly taking what it wants. The virus steals the genetic code for the parent tree's fruit, returning it to Prunus, and then replaces the parent's seeds with Prunus seeds instead. Now everything from the tree grows into a new Prunus, and gets to include the new, stolen fruit as well.

Over long periods of time, Prunus has pillaged and destroyed nearly the entire fruit tree kingdom, slowly becoming the sole victor in a cornucopia king of the hill game. Pure fruit trees only exists in specialized plant zoos, a remnant of an earlier, more idyllic time in plant history. In the wild, there is only Prunus draculus, with its tasty but mildly horrifying smorgasbord of deliciousness.

Edited for vampire tree flavor, because I liked that comment.

Then, the plant might evolve to bear different fruits for different animals at the right times of year for their various migratory habits.

That seems to me just about plausible. However, I expect that the far more likely result of that situation would be:
a) the plant would not grow there
or
b) the plant would focus on one of the animal species and produce a bumper crop so that the animal would be drawn there in massive numbers (adjusting its habits) and the plant and animal will grow to be dependent on each other.

And of course the plant has to find itself in this situation after having evolved in another situation where it could survive without multiple fruits. It would have to evolve this system quite rapidly. It seems less and less likely the more I think about it (but then so do colonial insects and spiders and flamboyant cuttlefish - nature does amazing things).

What you're talking about is called a chimera plant (the proper name unless you're an artist, then you make up names). They do occur naturally in fruiting trees.

Though you're unlikely to get different types of fruit, chimera trees with different color foliage do naturally appear. Though they are quite rare. 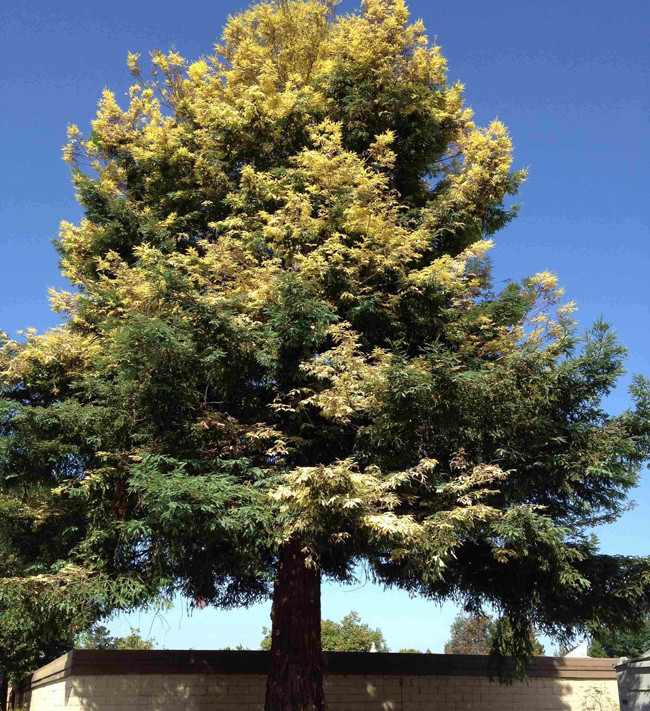 If you question is as Mike interprets it, can a tree evolve to produce many different types of fruit, the answer is very likely no. I assumed that was clear. However, if you're looking for the same end product, then the mechanism I laid out in the comments, a nesting creature unintentionally making grafts, then it is much more plausible.

An amalgam tree could exist naturally, as multiple species! This actually exists in nature!

Well, on a modest scale. I'm refering to hemiparasitic plants, like mistletoe.

Let's imagine the evolutionary steps needed to get to an amalgam tree, and work out the details.

Mistletoe is a "obligate stem hemiparasite". Meaning it can't live on it's own, but grows on the trunk of other trees. It steals nutrients and water from them, but has it's own leafs and off course fruits. Mistletoe grafts itself on another tree, all that is needed is a bird pooping out its seed on another tree trunk.

Now imagine the parasite is too successfull. The hosts would eventually die because the parasites steal to much water and nutrients. The parasite could evolve to prevent this by feeding the host sugar, to keep it alive. In a way, the parasite is not much different then a man-made fruit tree graft. The relation is getting more symbiotic then parasitic now.

The host and symbiont (no longer parasite) could further evolve together at this point. Some things that might happen:

One possible requirement is that the host tree and the symbiont don't compete too much for pollination and fruit. This is easily possible:

If the symbiosis is very successfull, it might drive out all other normal trees. One reasons this could work is that if this happens in a very high jungle, symbionts can evolve faster, as they start at the top of the canopy instead of from the bottom.

Both the host and symbiont species could evolve into different species. The host could evolve to handle multiple terrains, while the symbionts could evolve to handle multiple canopy/wildlife situations. This would become another possible reason that the amalgam tree is more successfull then regular trees: imagine that serious viral (or bacteria, insect or other wilflife) plagues are a common threat for all plant species, but typically only hit one species at a time. The host tree would be at an advantage because it has multiple symbionts and can thus easily handle the loses to just one of the symbiont species. One symbiont species could be hit hard by a plague, but can recover quicly afterwards, thanks to the nutriants and water supplied by the host (and thus survive thanks to the other species of symbiont!).

A forest full of extremely diverse amalgam trees is actually not that far fetched in this scenario!

All of this would require no sentient being to grow it, it would all work by seed scattering by creatures. (so bird poop on tree trunks)

But this could perhaps evolve further.

The host tree could have special spots where it gathers bird droppings, and incoporates the small symbiont seeds in these into a large seed of it's own. (I imagine this is possible, there are multiple species where the female stores male sperm for later usage.) The big host tree seed would contain a lot of symbiont seeds, and when it hits the ground, it would start growing, spreading the symbiont seeds inside its trunk, and activating them at the spots where they are needed.

When this evolves further, it could become even more complex, and the boundaries between species will blur. The only problem I see is that the need to have fruits on the symbiotic species might probably dissapear.

Just look at mythocondria, the energy sources within our cells, for inspiration. They started of as completely seperate organisms, and now replicate together with the host cells as one species!

(note: I've edited my original answer to show how this could evolve into one seed for an amalgam tree.)

I think it's extremely unlikely. A lot of time and effort goes into creating flowers and fruit as they are. You are asking if a plant will devise multiple paths for procreation and stay the same tree.

Some plants can have some significant changes depending on their environment. Sium Suave grows on the boarders of wetlands. As such it can be underwater or partially under water or on dry land. Many plants like one or the other. To help deal with this, it has two distinct leaf patterns. and the leaves will change back and forth with the raising and lowering of the water.

So I could see a fruit bearing tree to have a similar type of change depending on it's environment. This would still be limited in number of possible changes, and likely all the fruit would be the same on the whole tree, unless there is a wet/dry situation or maybe a bright sunny/ dark shade where two areas of the tree have different 'environments' it is dealing with. Or as a possibility of different seasons producing different fruit, for different dispersal mechanisms (including different animals).

Not the answer you're looking for? Browse other questions tagged evolution flora .

8
Smallest set of plants to feed a population

13
Designing a city around a giant tree?
7
Circular tree: possible?
7
Could Bamboos Evolve Into Trees In the Past?
2
Viability of animal plant? (Energy calculation)
4
Could a tree evolve to have vastly varying shades?
6
A parasitic apple tree?
2
Another Giant Tree Attempt
83
Tree Shape on a Tidally Locked World
2
What would be the advantage of evolving into tree-like people?
6
What would be the longest possible tree?