Despite having serrated fangs, why doesn't the vampire make a mess during a feast?

The vampire loves fresh blood and often sneaks into houses at night to feast. It would wait for nightfall when the occupants were asleep and then force their fangs into the neck of it's victims. However there is a mystery that puzzles the authorities who are tracking down these highly dangerous criminals: it seems surprising that no blood was spilled on the ground. In fact. there's only 2 clean holes each measuring 10 millimeters in diameter on the victim's body. According to the survivors, the attack happened in their sleep and they only found out later about the punctured holes on their neck as well as finding 2 pieces of serrated blood stained fang on the bed where they slept. How does the design of the serrated fangs benefit the thirsty vampire and why are there no blood stains anywhere?

That pretty much sums it up. You want to drive straws into the victim, allowing blood to be drawn directly from veins or arteries. Serration allows some tissue destruction as the vampire is drinking blood to open up bleeding while feeding. A mild paralytic and memory blocker (like the date rape drug Rohypnol) facilitate keeping the victim still and causing memory loss to prevent recollection of events. This can be injected with an anticoagulant to ease blood flow.

Once you have your fill, then either the fangs inject a clotting agent (like fibrinogen) or the fangs actually contain/are made of a clotting agent. fangs made of clotting agent would also prevent any leakage of blood around the insertion site and lead to a very clean area. An outer coating of other material in the areas near the actual bleeding can slowly dissolve, exposing the clotting agent only after the vamp has had a chance to feed. If the fangs are disposable, (i.e. the vampire keeps growing new ones like hair or finger nails), then they simply snap off in the wound to assure the wound clots. Once the wound is full closed, the vamp can pull out the fangs or leave them in, and there would be virtually no bleeding.

The whole thing is actually very close to what goes on with a mosquito bite. The same needles draw out blood through one tube and inject anticoagulants (or whatever is needed) through another. Advanced needles are actually being engineered that use some of the design features used by mosquitos. 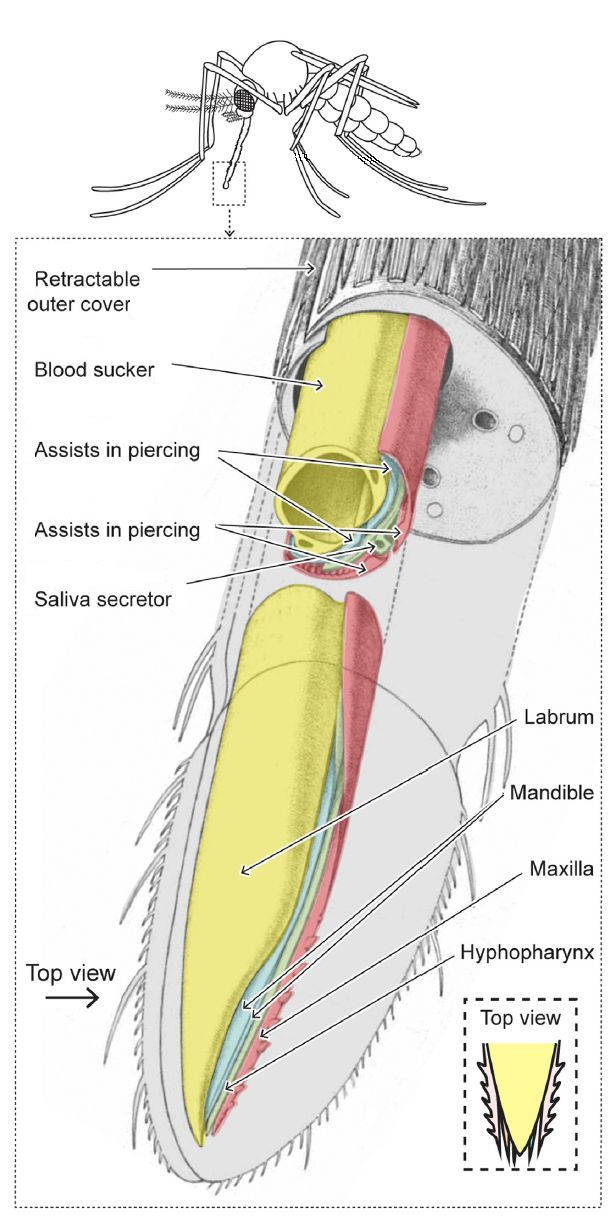 This could be done by a vampire, OR it could be an elaborate scheme dreamed up by some weird fetish people with medical knowledge and determination.

The vampire doesn't leave a mess behind simply because the "two fangs" left behind are just an elaborate renditions of needles for blood picking.

The vampire wants to be safe while eating its meal, and therefore prefers to consume it in a more protected environment than the room of its victim.

Being considerate, the vampire uses disposable, single-use needles for picking the blood, and has them shaped like fangs because, you know, a taste for macabre. In this way it has also better chances of properly handling the preparation and after-care of the victim.

"Vampires" are just a human mutation - they start out as babies, grow up but never (or just very slowly) grow old.

Instead of 2 stages of teeth-growth (child + grown ups) they have 3 (or more).

Every n years they change their whole tooth-getup (maybe just the canines?) and need - for a short period - artificial teeth to enable feeding while the new set is growing usable again.

The left behind ones are serrated because that is just how the vampire teeth are formed - the vampire saliva has healing capabilities so any rough edges are healed already when/if the snack-provider awakens.

Not the answer you're looking for? Browse other questions tagged creature-design crime vampires blood .

8
How can vampire-dad be popular when he has to stay inside during the day?
7
What element would make up a creature if it used the weak nuclear force during its metabolic processes?