A voyage of several ships at 0.2c needs raw materials and protection from impacts with interstellar dust. For these purposes, they installed enormous thrusters on the circumference of a 10-km-diameter C-type asteroid and accelerated it along with (in front of, but not connected to) them. They keep the asteroid facing straight toward their destination, mining the back surface while keeping the front surface is untouched, other than of course the constant bombardment by relativistic trace interstellar gases. When the story takes place, the voyagers have just finished flipping the asteroid 180 degrees to prepare for deceleration as they near their destination after 30 years of travel (they remain protected by the asteroid during this phase).

What I want to know is, what is the condition of the asteroid's front surface (the surface that was facing toward their destination up until recently)? Did the bombardment make it smooth? Powdery? Is it radioactive, and if so, how far away can a human float safely near it? Are there large craters from occasional collisions with large dust particles? The more detail you can provide, the better.

I found this article helpful, since it talks about bombardment of an oriented surface at 0.2c (though in this case it's assumed to be the postage-stamp-sized Breakthrough Starshot probe). It suggests that over a 30-year journey, erosion by the ISM will be of order 1 mm deep, and that collisions with large dust particles aren't common enough to hit a tiny probe, but are very likely to hit something several square km in area (I estimate ~$10^4$ collisions with $>10 \mu m$ grains over 30 years).

So while I'm pretty sure that only the first millimeter or so of the asteroid will be affected, the article doesn't go into detail about the questions in the 2nd paragraph (consistency, presence of large impact craters, and radioactivity). I'd also like to know if the composition of the asteroid makes a big difference here. 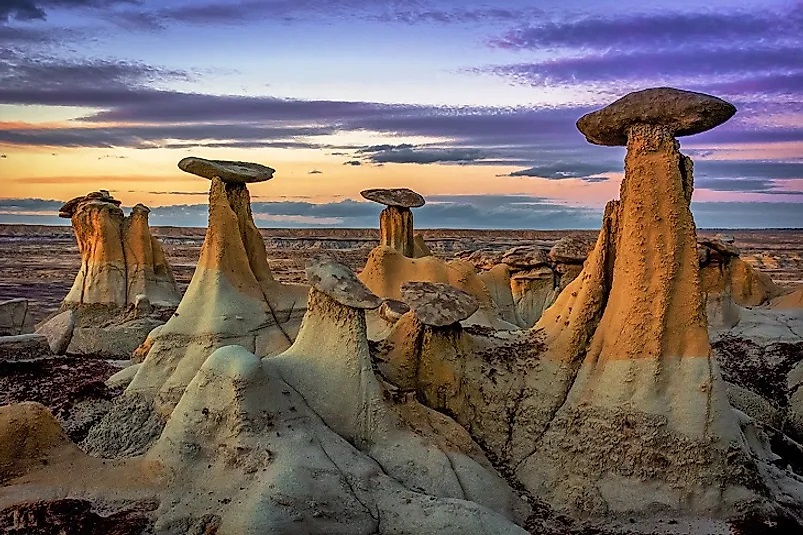 It was a good thing they had this big lump blocking for them. There was more to block than they expected, although when they saw hot asteroidstuff streaming by them they suspected things were going on up there. The trip has wildly eroded the forward facing surface of their asteroid, forming hoodoos and aeolian elements as referred to in your moniker, the fast moving cosmic medium here playing the role wind does on Earth.

Your voyagers had planned that for the deceleration they would rest on the asteroid and let its giant engines decelerate it and them together. They are less enthusiastic about hunkering in beneath the unstable looking hoodoos and spires that erosion has produced.

A C-type asteroid is volatile rich, low density rock (~1.7g/cm^3). This is not the most robust asteroid, but it can be large enough to provide the protection you need.

Now about how the surface should look.

By what I can read, interstellar space has a density of about 1 atom cm^3. By my calculations, at the peak speed of 0.2c, you should have ~6 billion interactions with particles per 1m^2 per second.

Each atom the asteroid interacts with will impart a great deal of energy. Using the Omnicalculator at https://www.omnicalculator.com/physics/relativistic-ke I assumed an average mass of atoms striking the surface as 60 AMU. With that, it calculated that each impact deposited 1.86*10^-10 Joules or 1.15 GeV. This doesn't sound like much, but its enough to liberate about 10's or 100's of thousands of other atoms. Some of these atoms may gain escape velocities of the asteroids, but much of them could stay in the vicinity of the crater. Further impacts will erode some of the loose debris, but would continue to liberate more material.

Ove the course of 30 years, for ease of calculations, I calculated a total 5.68*10^16 atomic strikes per square meter. even if the liberate upwards of a million other atoms, that would still only liberate a small fraction of a mol of material per square meter, resulting in a slight dust accumulation.

Another part is the friction heating. 1 eV is equal to 11600 kelvin in material. 1.15 GeV will equate to 1.33410^13 kelvin. That sounds like a lot, but if the energy received over a full square meter was deposited uniformly into 1 mol of material, it would equate to 1.2810^-4 K average temperature. Due to not losing energy to space and some conduction heating to material below in the asteroid, the temperature will build up over 30 years. Now, my math might be off, but I am only calculating a temperature build up of ~333.5K. I would assume the top few mm's would be evaporated away and the next few cm's to be vitrified due low heat transfer coefficient of the asteroid material.

So overall, the peaks and plains facing direction of travel would be covered in a glass material. Many of the peaks would be eroded into the crates and valleys. In the edges and shadows of the craters and mountains would be protected from vitrification, so dust and debris would build up here.

The impacts per unit surface won't change with the size of the shield. The figures that you have can be applied also to the large one.

In other words, with a larger surface you intercept more particles, but you have also more surface to erode, therefore the two effect balance each other out.

You might expect the relativistic impact between the space medium and the surface to produce some radioactive byproduct as a consequence of the merging of the atomic nuclei of the shield with the nuclei found in the space medium, but the shield itself will protect the ship from the radiation.

Not so lucky would be those looking at the ship from the destination point.

Not the answer you're looking for? Browse other questions tagged science-based asteroids interstellar-travel .

2
What material should a whipple shield on a lighthugger be made from?

1
How to naturally maintain a Earth-sized Planetary Ring System and the possible periodic bombardment that can ensue?
8
Can a magnetic shield be effective for interstellar ships?
2
What direction is my asteroid coming from?
5
Interstellar probe designed without FTL?
1
What atmospheric composition do I need to sustain Earth-like temperatures at my planet's orbital distance; how close should my asteroid belt be?
4
Cataclysmic cloud of asteroid bits
10
Relativistic Interstellar Combat
6
Surveying the Barrier
8
Interstellar laser sculpting