For context: say I have a planet in a P-type orbit around a pair of binary stars. One's a K-type and the other is a red dwarf (M-type). I want it to be such that, planet-side, it looks as if there is only one sun, and would like a scientifically plausible mechanism for such. Said planet is in the habitable zone of the stars.

Would it have to be an atmospheric phenomenon? I suppose if there was a dense atmosphere or cloud layer, the light from the two stars would not be distinguishable, but I don't know how realistic that assumption is. Would any moons still be visible?

Or would the larger star simply outshine the smaller one to the extent that it looks like one large sun? Would the planet be too close to them for the stars to look like a singe light source?

In order to make two bright objects look like one, you need them to be very close together (angular distance, at least, so their separation is small relative to the planet's orbital radius), and ideally close to the same brightness.

Here you have one that's significantly dimmer, smaller, and cooler than the other, so the best you'll get is to have the two stars so close together that one skims the other's atmosphere. The stars can then fill each other's Roche lobes, giving an overall "egg shape" to the pair (with the small end of the egg fairly sharp compared to the usual hen fruit), and the small end dimmer and redder. Exchange of gas between the two can further blur the distinction between the stars -- and of course people who evolved there will think it's entirely normal to have a star that isn't spherical or of uniform temperature.

What I don't know is whether main sequence stars in this proximity will affect each other's normal course of evolution, or whether the two will tend to equalize masses over geological time (or vice versa), make the smaller star unstable (or vice versa), etc. You'll need more astrophysics knowledge for that -- but it won't matter at all over the life of a human, a civilization, perhaps even a species (stars mostly change very slowly, and K and M type slower even than our Sun).

From comments (thanks, @Logan R. Kearsley), it seems that evolution of the stars won't be noticeably affected until the larger, shorter-lived star starts to leave the main sequence and blow up into a red giant, at which point the smaller star will steal mass and slow this process. How much this will affect the evolution of the smaller star (which would otherwise turn into a truly tiny white dwarf after a trillion years or more) is less clear; if it gains enough mass it might itself become a red giant in only a hundred billion years or less.

None of these stellar evolution changes will have any effect on a civilization on the circumbinary planet of this question, however; the lifetime of a K star (depending on its mass) ranges from almost twice to half a dozen times that expected of our own sun -- seventeen to seventy billion years, roughly.

The one for K class main sequence stars is here: https://en.wikipedia.org/wiki/K-type_main-sequence_star

and the one for main sequence M class stars is here: https://en.wikipedia.org/wiki/Red_dwarf

Unfortunately it doesn't give the diameters of the stars of various types. The diameter of a star is important to calculate how large it would look at a specific distance, such as the distance where a planet would be habitable.

The red dwarf star EBLM J0555-57Ab may be the smallest main sequence star known. It has a radius of about 0.08 that of the Sun, about 59,000 kilometers, smaller than Jupiter or Saturn, though many times as massive as those planets.

I believe that the maximum resolution of the human eye is about 30 arc seconds, or about half of an arc minute. An arc second is about 0.000000771 of a full circle.

Since an extremely tiny class M star such as EBLM J0555-57Ab would contribute only a tiny fraction of the heat and light that even the dimmest spectral class K star would, your planet would be frozen and lifeless unless it was close enough to the class K star to be within its circumstellar habitable zone.

And of course the problem with being far enough away from the stars to not see the class M star as a disc would be similar to the problem of not seeing the separation between the two stars. As the two stars orbited each other, sometimes one star would be in front of the other, sometimes one star would appear to touch the other, and often the stars would appear to be separated.

There have been many questions about the habitability of giant, planet sized moons orbiting giant planets. Usually, those planetary sized moons are assumed to get their heat and light from the star in the system, and thus be orbiting within the circumstellar habitable zone of that star.

But scientific studies show that such a hypothetical moon could receive significant heat and life from the giant planet it orbits. That heat and light would be from the star's light reflected from the planet onto the near side of the moon, the infrared rays emitted by the planet at its temperature, and from tidal heating resulting from tidal interactions with the giant panet and any other large moons of the planet.

Those calculations showed that in some cases the moon could receive sufficient heating from the planet to suffer a runaway greenhouse effect and become uninhabitable. And of course if the planet and moon were farther away from the star in the system, that heating might be enough to keep the moon warm enough for life despite being outside the circumstellar habitable zone of the star.

So I think that you should make the two stars a very close binary, perhaps a contact binary, and make the habitable world a moon of a giant planet far beyond the usual outer ledge of the habitable zone, kept warm enough for life by tidal heating.

I suggest that you make the K type star in the system a K0V class star, the most luminous and hottlest subclass of K type star. The hotter a star is, the more intense its light will be, and the more painfull it will be to look at that star, and the brighter glare from the K type star will make it harder to notice the class M star.

In fact, you might want to reconsider and make the bigger star a class G star or even a class F star, since they would be hotter and thus harder to look at and make it harder to notice the M star beside it.

So you should make the two stars as close together as possible, and make the giant planet with the habitable moon as far away from the stars as possible, to make all such effects as small as possible.

That means you need to look at previous questions about the habitability of exomoons and the answers to them, to figure out how to keep your exomoon warm enough to be habitable.

Planet-side, it can look like this for two reasons.

There's probably a "Goldilocks zone" in between, where the stars are dim enough to be observed with the naked eye (unlike ours) and yet close enough that they can be resolved as separate entities. You don't want your planet in this area.

Your planet is at the L3 Lagrange point of the smaller star. Thus the big star is always interposed between the two. 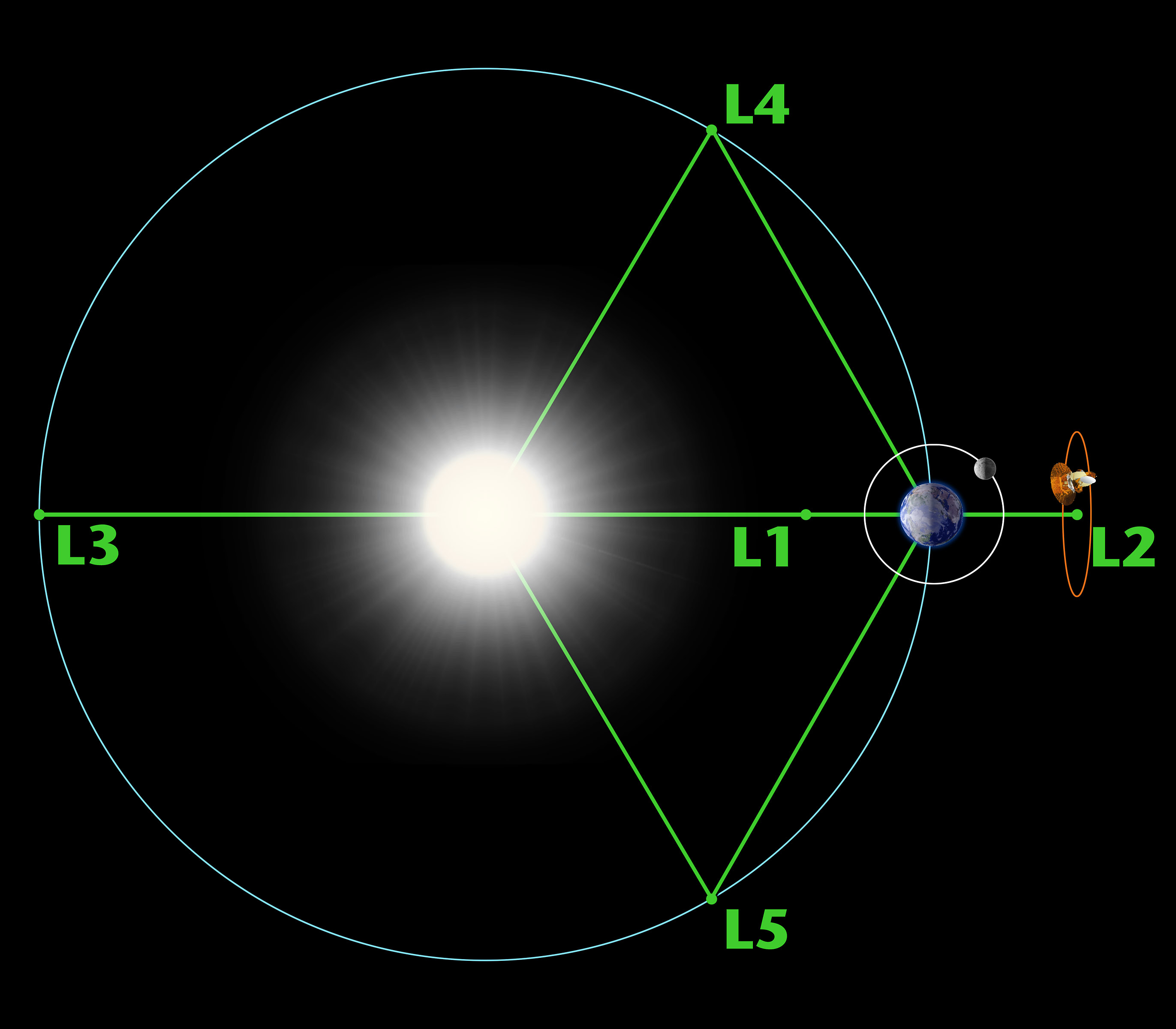 We can clearly see the sharply-defined disk of our own sun, especially when it's filtered through a bit more atmosphere at sunrise and sunset. With a dimmer K-type star together with a M-type red dwarf, a habitable world would be closer and have an even better view.

A thick layer of cloud cover would be a plausible way of obscuring the true nature of the stars. The fuzzy blob in the sky might often be redder on one side or change color if one star eclipses or transits the other, but the nature of the system won't necessarily be obvious to observers on the surface. Moons would only be visible as dimmer fuzzy blobs that occur at night, though.

Another possibility is for the locals to have a very non-humanlike vision sense. Perhaps they can only clearly see short-wave light, though this would be odd considering the planet gets relatively little such light. Maybe they don't have clear vision at all, or are very nearsighted. Or their eyes just don't handle bright objects as well as ours. In any case, special viewing equipment would allow them to get a clear view.

Megastructure. Aliens have surrounded one of the stars with a Dyson sphere, Ringworld, etc. which consumes the visible light and emits infrared that you are not quite able to see, until science.

Space oddity. Rather than a megastructure, electromagnetic life forms (distant descendants of the Common Sunspot) have taken up residence in the smaller star, and their ecosystem now releases only dim infrared light high in the coronasphere, after it has sustained the vast intellectual ferment of soaring prominences surrounding their Philosophers' Star.

Protoplanetary disk. Both stars are surrounded by a vast ring of debris, and light filters through this ring.

Tidal lock. To an approximation, your planet always shows one face to the two stars. (Because it is circumbinary, it can't just face one all the time) The part of the planet that directly faces the brighter star all the time is uninhabitable, as is the dark side; but in the habitable zone (of the planet, I mean) only the smaller star ever rises above the horizon.

Not the answer you're looking for? Browse other questions tagged science-based reality-check stars .

18
How can I safely brighten my secondary star?
15
What would this nebula look like from a planet?
3
How do solar eclipse(s) work(s) in a binary stars system?
1
Is it possible for a planet to orbit a binary system at the same speed as the stars themselves?
1
Would lensing make stars in a binary system appear further apart at sunset?
8
Visibility of a Red Dwarf Companion Star
3
How Big Can the Habitable Zone Be in a G-Type Binary System?
10
What would seasons and daylight be like if the Earth was on an eight-shaped orbit between two stars?
10
A Habitable Zone Within a Habitable Zone--Would that Make any Difference?