Let's say the civilization has a good reason to produce fake meat such as maybe all the meat is now able to kill a human even after being cooked.

How primitive could that civilization be and still be able to make lots of this fake meat or at least something that could replace meat?

If you have cereals, you can extract the gluten from the flour and make something that closely resemble the appearance of meat and protein rich, called seitan. 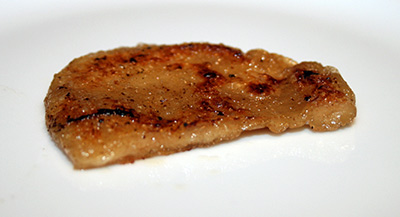 Basically the process consists in making a dough with the flour and washing it with water, taking away starch and water soluble proteins, so that only the insoluble part remains.

Being this simple, it just requires being capable of farming and milling cereals. However, "wasting" so much cereals would hardly be affordable for a sustaining economy.

Therefore, since you want wide production, you need to reach the tech level where synthetic fertilizers, pesticides and mechanized agriculture are present

Tofu is widely used in vegetarian meals, filling the role that would be taken by meat in non-vegetarian dishes. Getting the coagulants in quantity might be the stumbling block. Still, somewhere around the iron age.

It might be possible through clever crossbreeding to produce a fruit that is stringy with a strong umami taste that would have the texture and flavor close to meat. Actual fruits are wildly different than the wild progenitors which are smaller and far less sweet. This is stone age technology of picking which seeds to plant over a several generations.

Starting with a squash you could end with a flat gourd that you peeled to reveal something steak like. An orange could go into a sphere of "meat".

If people were unable to eat meat it would most likely just disappear from the menu and there would be more nuts and legumes and no real attempt to replicate it and attempts to do so would seem creepy and almost cannibalistic.

As soon as they figure out cheese

Tao describes how tofu was popularly known as "small mutton", which shows that the Chinese valued tofu as an imitation meat.

Tofu already has different consistences and can be flavored various ways. As far as how close you can get to "meat" that's going to be decided by each individual who eats its. Considering there are still very popular dishes involving tofu, I'd argue they found a popular and tasty replacment.

In our own society, Nuteena (a meat substitute mainly made from peanuts, soy, corn, and wheat) was based on the 1896 formula for Nuttose, sold by "the other Kellog brother", not the one who founded the modern cereal company. Later, Loma Linda Foods offered a number of meat subtitutes starting in 1949; they were later bought out by their competitor, Worthington, which was bought out by the modern Kellog's cereal company in 1999.

Therefore, it's safe to say that meat substitutes fairly similar to those I grew up with in the 1960s were possible as soon as the nutritional value of peanuts had been recognized and the foundations of separating foods into starches and proteins laid down. In our history, that took place from the late 19th century through the first half of the 20th, but all the crops and techniques were available after the colonization of the Americas (peanuts were a New World crop) and the opening of the Far East (soy was from eastern Asia). As an example, I recall my parents making "gluten steaks" from plain wheat flour in our home kitchen between 1970 and 1973; these techniques could have been applied (albeit producing nutritionally incomplete proteins unless a mixture of grains and legumes was used) even in the pre-Classical ancient world, given the knowledge.

For less "analog" substitutes, the Chinese made tofu as far back as the 2nd century BCE, and cheese (which is nutritionally a reasonable substitute for meat and, while animal derived, doesn't require slaughtering the animal) has been around longer than that.

or at least something that could replace meat.

They'd need to be a) settled down and b) conduct some sort of agriculture. And by that point the humans would IRL have eaten hardly any meat to begin with, so we don't even need to make anything up.

You need fire, and perhaps basic agricultural/forestry skills but that's about it.

That is, assuming chicken of the woods (a fungus) lives up to its name (also Wikipedia with some alternative species).

Laetiporus sulphureus can be cultivated (though isn't often), and grows on a range of tree species. With a need for it, cultivation could become much more significant.

It won't provide as much protein as meat (largely because of the high water content), so nuts and if possible pulses would need to be a more significant part of the diet.

Is it not the other way around? What is the lowest tech level a society needs to produce meat at all?

I realize I might start a comment war and risk to get downvoted to sub-zero, but to me it would seem that technology is what made our ancestors shift from gatherers (of berries and insects) to hunter-gatherers. We can't catch meat nor eat it without the help of technology: tools, stones, javelins, fire.

The next step in technological development is agriculture: controlled growing of plants and cattle.

Legumes (like aforementioned soy beans) are a very efficient source of proteins, and might be easier to produce in large quantities than meat. So, I tend to say: you need less tech for lots of fake meat than for lots of meat.

For the situation of your story, this would imply that you need a society that first achieves a high level of technology ('high' meaning: on par with ours) and then needs to abandon that production and 'revert' to create fake meat. Using food processing technology to imitate it as closely as possible, instead of eating plain legumes.

A hypothetical culture that can harvest and grow mycoprotein from edible molds, yeasts, fungus and/or mushrooms doesn't need to be that advanced.

Not the answer you're looking for? Browse other questions tagged technology food .

19
How can I save a high-tech/no-spaceflight civilization against the wrath of non-technological gods?
16
Pills instead of meals?
4
How would food availability and distribution for humans be like if bacteria evolved to resist cold and heat?
5
How to minimize risk of infection from raw meat?
2
Minimum required technology for a species to reach space?
15
Are insectivores and carnivores viable to become sapient?
30
Minimum tech level required to outrun a terminator?
7
Self-sufficient Airship