I'm in the process of creating flying creatures big enough to be mounted, but there's a problem: the bigger the size, the heavier the weight, the heavier the weight, the more difficult (or even impossible) it is to fly. And some of my creatures have 6 limbs. With that in mind I remembered that there are gases lighter than air and that birds have hollow bones filled with air pockets, so I got the idea that my creatures' hollow bones are filled with some gas lighter than their own. Can a creature fill bones with gas that is lighter than air?

It has to be a gas that the animal can get from nature or produce with its own body, ideally it is not toxic or flammable (imagine if someone shoots a fire arrow at a pegasus and it explodes). If you can, you can talk more than one gas (if they are gases that the animal produces with its body, then there is an alternative for carnivores and herbivores). My heaviest creature can weigh up to a maximum of 450kg.

Yes, but it will make no significant difference to the weight of the animal.

The gas that immediately springs to mind is methane with a molar mass of 16.04 g compared to air at 28.97 g/mol. One mol occupies 22.4L at standard temperature and pressure, so 22.4 litres of methane would be 13g lighter than air.

An albatross weighs 7Kg, I have failed to find an estimate for the volume of the bones but I think one litre is an overestimate. Taking that, methane rather than air would only make 1/2 a gram difference to the total weight.

The only two gases sensibly lighter than air are hydrogen and helium.

Of the two, hydrogen forms explosive mixture with air at practically any concentration, therefore you are left with helium.

Helium is a noble gas, and is produced by nuclear decay, via alpha particles capturing two electrons. Being a noble gas doesn't react with other substances, and being so light is also not trapped in Earth's gravity well. The only plausible way for your creature to produce it would be to feed on radioactive substances.

All these problems apart, the lifting capacity you might get is very meager: based on this table, a 10 inches/25 cm round balloon filled with helium can lift a mere 6 grams. It's easier for the creature to get lighter by emptying its bowels before taking off.

Just for curiosity, lifting an 80 kg person would take a tad more than 5700 regular balloons

Even if the gas you handwave is as light as a vacuum (as opposed to hydrogen, which is roughly 1/14 of the density of air), it will take substantial volumes of it to displace enough air to lift a creature with significant muscle, bone, organ, and skin mass.

Air, at standard conditions, masses about 29 g for 22.4 liters (that's the volume of one mole, so it has a mass of one gram for each atomic mass unit -- and air, at 79% nitrogen, 20% oxygen, and small amounts of carbon dioxide and argon and traces of other stuff has an average molecular weight barely over 29) -- so that, minus the weight of your lifting gas, is the most weight that buoyancy can lift.

Since hydrogen weighs 2 g (and a tiny fraction, accounting for the very small percentages of deuterium and tritium in natural hydrogen) for the same volume, a 22.4 liter volume of hydrogen can lift about 27 g -- including whatever structure contains the hydrogen, of course.

This is the reason we don't see animals using hydrogen for lift. It's easy for biological systems to produce hydrogen, if it's needed -- but the amount of hydrogen needed to lift a human, at around 75 kg, comes to 22.4x75,000 = 1,680 cubic meters -- that is, the human would have to contain an additional 1680 cubic meters of volume, filled with hydrogen, without increasing its body mass at all.

Even if you had a fictional lifting gas that has no mass, you'd only reduce that volume a little; 29-ish g per 22.5 liters instead of 27.

This is completely impossible (the weight of the skin to contain the gas would exceed the lift of the gas) for any creature heavier than a good-size beetle -- and much heavier creatures can fly faster, with greater control, and lift more "payload" with wings.

Hot Air or (even better) Steam:

Hot air is a lifting gas. Water vapor is lighter than air. Combine the two, and what do you have? Steam.

This can be very problematic. The biggest barrier is to have a life form that can tolerate exposure to pressurized water at the boiling point. But life forms are endlessly creative. There could be a thin layer of material that insulates the organism from heat. It could be a grown structure, no longer alive, that creates a natural sealed heat & pressure-resistant bag. The earliest hot air balloons were made of paper and silk, so I'm guessing some reasonable material could be grown, extruded, or manufactured naturally that would work. Or the whole organism could be adapted to high internal temperatures.

Then you need to be able to generate a lot of heat. This could mean the organism actually starts fires somehow and harvests the heat produced, OR that the organism produces it's own combustible (which could itself be a lifting gas, streamlining the process). Biologically, hydrogen peroxide can be rapidly metabolized to steam (thank you Logan R. Kearsley).

The animal may also have some means of external digestion/fermentation, trapping flammable gasses in an external storage (like a giant grown balloon...) and eliminating the need to carry around a large bulk of undigested food while providing a supply of methane either to burn or as LTA gas. There's nothing to say it has to only be one or the other.

But nothing will prevent your organism from tending to look like a giant parade character - big, bloated, un-maneuverable, with lots of long small limbs enabling interaction. The upside is that if your organism doesn't constantly fly, especially if the heat is obtained from an external source, they can always dump the steam (possibly as a form of defense or offense as well) and become a heavier-than air animal again. 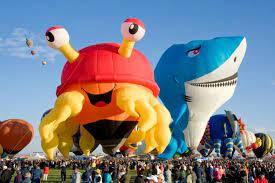 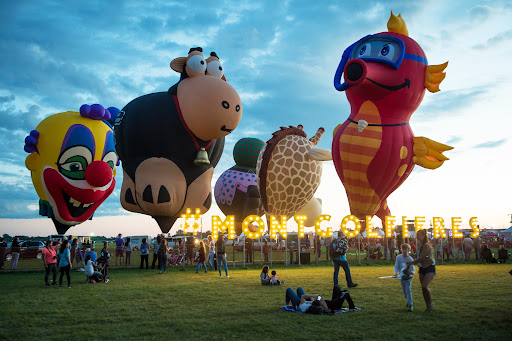 A different approach... An anti-lung.

An organ in the creature that is collapsed at rest and expands into a vacuum at the contractions of the muscles around it. A vacuum is the most buoyent thing you'll get in an atmosphere, though you'll still need a relatively large amount of space displaced for it to be truly effective.

There's also the problem of osmosis and various other gas and fluid transfer mechanics that organisms have that'll make it so that the anti-lung doesn't remain empty for long so even if a creature could make flight easier for itself with this it'll not remain effective forever.

EVERY cell of the creature is(somehow) partly balloon. Each cell has only a tiny bit of it be an actually useful cog of the metabolic machine, while the rest of its(expanded) volume is actually either (1) empty space or (2) a concentration of methane or hydrogen or some other LTA gas. This would have two effects, them being that the creature would end up being a lot larger than its weight suggests, and that the entire creature would be naturally buoyant, making larger wings, stronger muscles, hollower bones, etc, for a larger flying creature a little unnecessary since its own volume would be doing all of the heavy lifting for it.

Unfortunately this would lead to a relatively squishy creature, and depending on if the cell balloons are vacuum spaces or gas pockets, it might end up being a ridiculously explosive creature too, but hey, it's an(albeit unlikely to ever occur) option.

Not the answer you're looking for? Browse other questions tagged science-based flight gas .

9
What light gas can I have in the upper atmosphere?
4
A gas lighter than air allowing for easier humanoid flight
8
Is there dense, non flammable gas that I can cover the Earth in?
2
What planetary conditions would make flight easiest for both lighter than air and heavier than air craft?
6
Separating light gases from heavy without chemistry
5
Hydrogen Dragons
7
Vacuum airships
6
Strong flying creatures