What's the feasible upper size for a medieval country?

I'm attempting to make a large tropical island, roughly 120k square miles in area, with a centralized monarch-based authority. Is this feasible, or will it quickly devolve into smaller kingdoms, separate in all but name?

If not, what's the upper limit?

If any details are needed, the island has fertile land, is relatively equatorial, and is in stereotypical no-gunpowder feudal medieval Europe.

Assuming that you don't want examples of African (The Mali Empire), Asian (The Mongol Empire), or American empires (the Inca Empire), I looked for empires which were at least partially European.

The area of the eastern section of the Roman Empire, the so called "Byzantine" empire, fluctuated a lot during the Middle Ages. 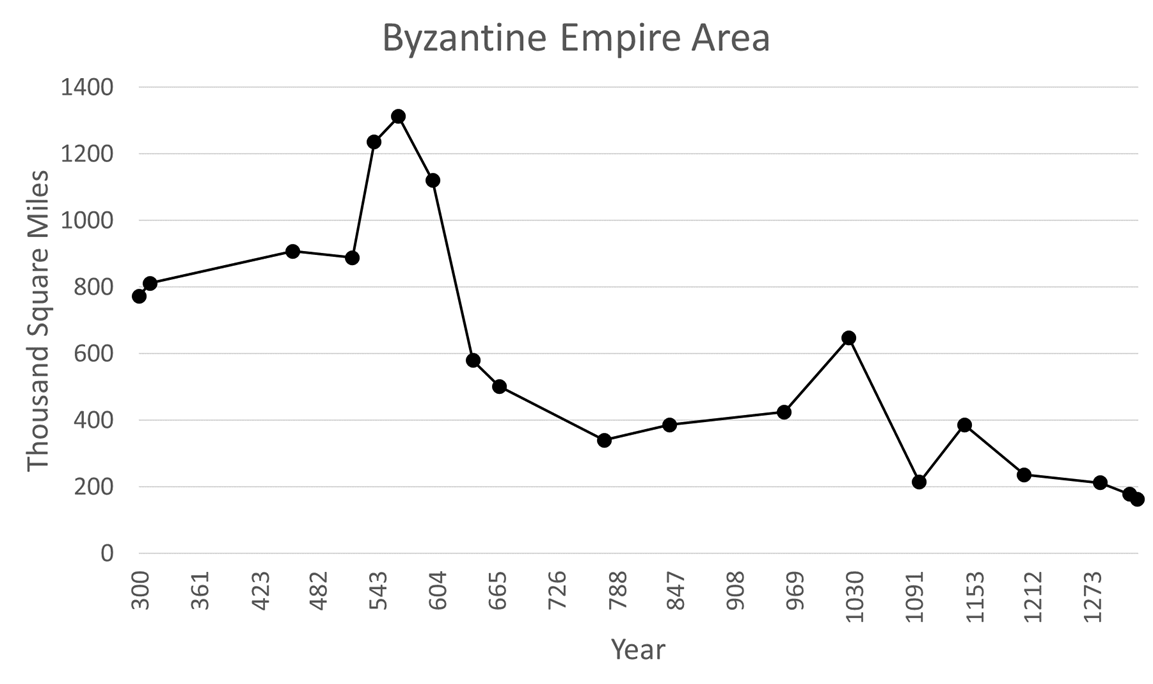 The smallest area of the "Byzantine" Empire listed there is 420,000 square kilometers or 162,162 square miles in 1320, though it got smaller in later decades, eventually passing below your goal of 120,000 square miles.

So you see that a number of more or less medieval and more or less European states had larger areas than 120,000 square miles or 310,798.573 square kilometers.

Compared to some Empires, 120k is tiny

To put into comparison how feasible this is, we just need to take a look at the Roman Empire.

This was long before medieval times, so if it was possible then, why wouldn't it be possible in a setting that is even further in the future?

If the Mongols and the Romans were able to pull off empires that were significantly larger than this, then it is certainly feasible.

You also have the advantage that this is an island locked in by the ocean. Once you've conquered all the lands within the island, the people either have to accept the rule or hope they can somehow take a boat to another land.

As for the question of, "would it dissolve into smaller kingdoms?" that depends on a lot of factors.

Generally speaking, empires break into smaller bits because they have overextended themselves. If they don't have the manpower or infrastructure to maintain such a massive landmass, then it will eventually break into pieces, but an island of this size could remain relatively stable. While massive empires crumble easily, a reasonably-sized nation with decent leadership can last a very long time.

Another factor is culture. The people of the island might not want to be under the thumb of an emperor in the first place. For example, there might be hundreds of languages and religions on the island, but the empire only wants one language and one religion. This could lead to the island dividing into several smaller nations and cultures.

Although there are size limits in various ways to countries in certain time periods, 120km² certainly isn't the biggest. Spain and France did have turmoil, but didn't completely fall apart. With some adaptations I think they can stay ok.

There's some recipes that can help. A common enemy. Like an area outside the island that can be fought over. It can be the population in revolt or other countries that attack it, but either can push the inhabitants together. Other things are a common relatively background. Some social views that allow them to stick together. Dependency on each other. All can contribute. If these stay relatively constant and change isn't fast, then the country can be stable for a long time.

The most dangerous of all is change. Change means instability, which can change ideas and splinter a country. Change isn't bad necessarily, but just has that potential.

A maximum is difficult to estimate. We have examples where the size tore up countries, like the Roman empire. Through it shows a limit, it doesn't show the limit. With some differences it might've lasted longer.

The carolingian empire covered over 400k square miles before it collapsed into three soon to be two kingdoms. The Holy Roman Empire was more stable and had about 400k sq mi as well.

Size will not be the main issue, but the tropical climate might be

Tropical climate is more prone to diseases and tend to have lower population density, which in turn make it harder for a central authority keep the region together.

I would recommend putting the isle closer to the tropics than the equator, there's where civilization tend to form, like Mayan, Indians or Khmer. The regions closer to the equator tend to remain tribal and unpopulated, like the Congo, Amazonas or Borneo. That is, unless there is something that makes it more inhabitable, I can think of Indonesia for being in a major trade route and the Marajoara in the Amazonas delta (relying on fishing and a flooding savana).

I haven read all of the answers, but most site historical sources for who occupied what how much land. The Mongol empire comes up a lot. Which, is true, likely was the empire with the largest land area. However, Most of the time it had existed they were either expanding or collapsing. There was never really any sustained Mongol Empire for any meaningful length of time. The answer to your question is, there is no upper limit. It entirely depends on engrained culture and the sophistication of the cultures adopted laws. If the culture fragments in a way that is destructive to the body of the governments imposed system of laws, and those laws are not sophisticated enough to adapt. The society will collapse.
Rome wasn't conquered by barbarians, it was fell when the state began to disintegrate (for many reasons) and its laws and culture couldn't hold it self together thus and was unable to react to the uprisings it had easily dealt with for centuries. Size and population does play a major role, however those are only forces that any government has to deal with whether it is a town or a content. How it deals with those forces is the point at hand.
If you have a Government that is steady, forethinking and consistent, a strong and well regulated obedient army, along with a homogenous spiritual population, the only thing that county should fear would be decadence(That part is opinion). Steady, forethinking and consistent doesn't necessarily mean good or bad. They could be brutally authoritarian or strict egalitarian as long as the culture allows such.

Assuming a roughly circular shape, that's only about 400km across. Not too bad for horse riders to cover if you put the capital city roughly in the center, especially with relay stations at regular intervals.

Even signal towers with smoke and/or fire signals can work, maybe have both.

As already pointed out, similar sized fiefdoms of various natures existed in reality within the rough technological and social era you're considering, this shows how they could exist.

Of course it depends on geography and culture as well. If the area is hard to navigate, control over outlying regions becomes next to impossible (which is why there are for example so many separate tribes in New Guinea, before helicopters and aircraft it was pretty much impossible to travel from one valley to the next there because of the terrain, so different 'nations' could exist within a few kilometers of each other and never even know about each other).

But you will have to create a cohesive culture across your land, with relatively small regional variations. Either that or have large garrisons to suppress unrest and rebellion in the outlying provinces, which brings its own problems as the leaders of those garrisons might just decide to lead said rebellion rather than suppress it (happened during the late Roman era too, and maybe a plot element for you to use).

Not the answer you're looking for? Browse other questions tagged government medieval-europe kingdom .

6
A Room for Heroes on the Run
84
What's the most likely "post democracy" form of political government?
28
What's the impact of a "cloning" teleporter?
18
How would the government prepare the country for an acknowledgement of real magic in our world?
11
What's the fastest way for a government to cause a recession without being blamed?
80
How to protect shops in the medieval era against thievery?
11
Can an independent country join the commonwealth?
3
What jobs would Goblins be suited for in a medieval setting?