Can I grow a banana that will produce mushroom cloud?

There is a trace of radioactive isotope of potassium found in every bananas, I'm curious can I grow a banana which is rich in heavier unstable elements so that I can harvest and threaten my neighbor? (A single banana must be able produce fission reaction.)

Now lets run through some of the reasons.

Chemical isotope seperation is indeed possible though it's tends to work better with light elements: https://en.wikipedia.org/wiki/Isotope_separation

Radiation isn't too much of an issue, living things can evolve to handle extreme radiation up to the point that there are microorganisms which can live inside a running nuclear reactor feeding off the radiation.

So it's vaguely plausible that a plant might concentrate fissile isotopes.

No, the big problem is getting enough fissile material close enough together fast enough. If your banana plant can survive the radiation, can select fissile isotopes and can concentrate them you still run into the problem that if you have material close to critical as soon as it goes supercritical it explodes with the force of tnt, not the force of a nuclear bomb. Once your big fruit gets close to the tipping point of being able to produce a nuclear reaction it boils the water inside itself and produces a wet pop.

In actual nuclear weapons they need a "gun" setup where one lump of fissile material is shot inside other fast enough that it's way above the limit for going supercritical right away so that a lot more energy can build up before the lump of uranium tears itself apart with the energy released.

If you want something sort of feasible you might be better having your mad scientist produce a banana plant that makes nitroglycerin.

No, because you can't make a nuke out of potassium.

Being radioactive is not enough to be a viable nuclear fuel source. If you want to make a fission bomb, you need a material that is fissile. Fissile materials are those which are capable of sustaining a nuclear fission chain reaction. Uranium is one such material, which when struck by a neutron will sometimes split into two smaller atoms and release several neutrons in the process.

Potassium doesn't do this. It decays either into calcium by releasing a beta particle (during the process of which one of its neutrons becomes a proton) or else decays into argon by capturing an electron or releasing a positron, but will not enter a fission chain reaction under any circumstances.

One additional issue not addressed above.

The plant can't make radioactive isotopes itself, it can only concentrate them. You would need sufficient radioactive material in the soil within range of the plant's roots. Assuming a large root structure filling a cube 10m to a side, this gives us approximately 1000 cubic meters of soil to mine.

Assuming you'd like to concentrate uranium to build your bomb, the Earth's crust contains around 2.8ppm uranium. This would yield a maximum of 2.8g in your banana assuming maximum extraction efficiency. Not quite enough for a bomb, but perhaps enough to make an interesting story.

If you plant your banana tree right above a shallow deposit of ore, and give its roots the ability to penetrate rock you might have more success, but then you might simply dig the stuff out of the ground. 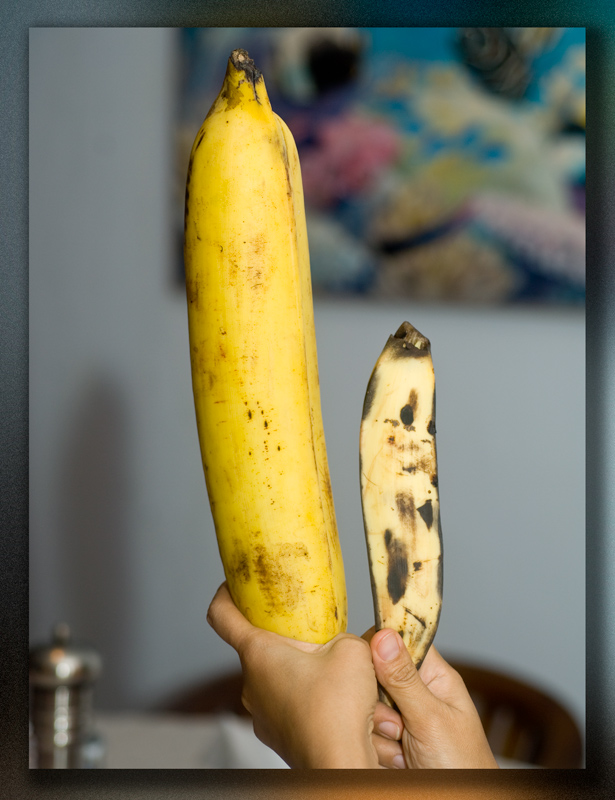 When you say "A single banana must be able produce fission reaction", I assume you mean a fission chain reaction. As such you need:

Assume for now that you have the power to transmute any element to the same mass of any other element (implausible).

This is awfully heavy for a banana - I just weighed a pretty average looking one in my kitchen - it was 140g.

So even if you were able to transmute the entire mass of one banana to a fissile element, you wouldn't have enough to easily achieve a chain reaction.

Perhaps there are elements with critical mass lower than this - suggestions welcome.

Not the answer you're looking for? Browse other questions tagged biology weapons weapon-mass-destruction natural-weapons or ask your own question.

34
Evolution of species with separate sapient and non-sapient forms?
7
Can you help me design humans that naturally grow green hair?
8
Growing magical creatures tissues in vitro
22
Realistic fantasy slimes
2
Impact of humanoid animals who can grow fur/hair very quickly and use it as a weapon?
23
Would we notice ridiculously healthy birds?
3
Communication via Magical Sound
3
How can magical testicles produce DNA that is different from its host?