What condition could cause chronically reddened sclera?

I have a character whose eye whites are bright red, and I'd like to make some attempt to justify why.

This character's species has eyes that generally become bloodshot in the same way and under the same conditions as humans', but they are alien, so feel free to take liberties with the biology. The actual appearance doesn't have to be bright red, but should at least be on par with a bad case of pink eye.

It's okay (even encouraged) for the underlying condition to cause other symptoms, and it can even be medically serious, but the eyes should look normal other than the color. Most importantly, the red eyes should be constant or near-constant for years, and none of the other symptoms should point toward a treatment that causes them to go away. (Anything more advanced than eye drops would be obtainable but discouraged in this character's society, so just about anything can be justified as treatable or not treatable as needed.)

If it helps, they are amphibious and spend a lot of time in saltwater, but any explanation using this fact would have to adequately explain why this character alone is affected.

Here's an example of what I found when I searched for real conditions—everything notably short-term except, like, hay fever.

Thanks to anyone who takes the time to help. 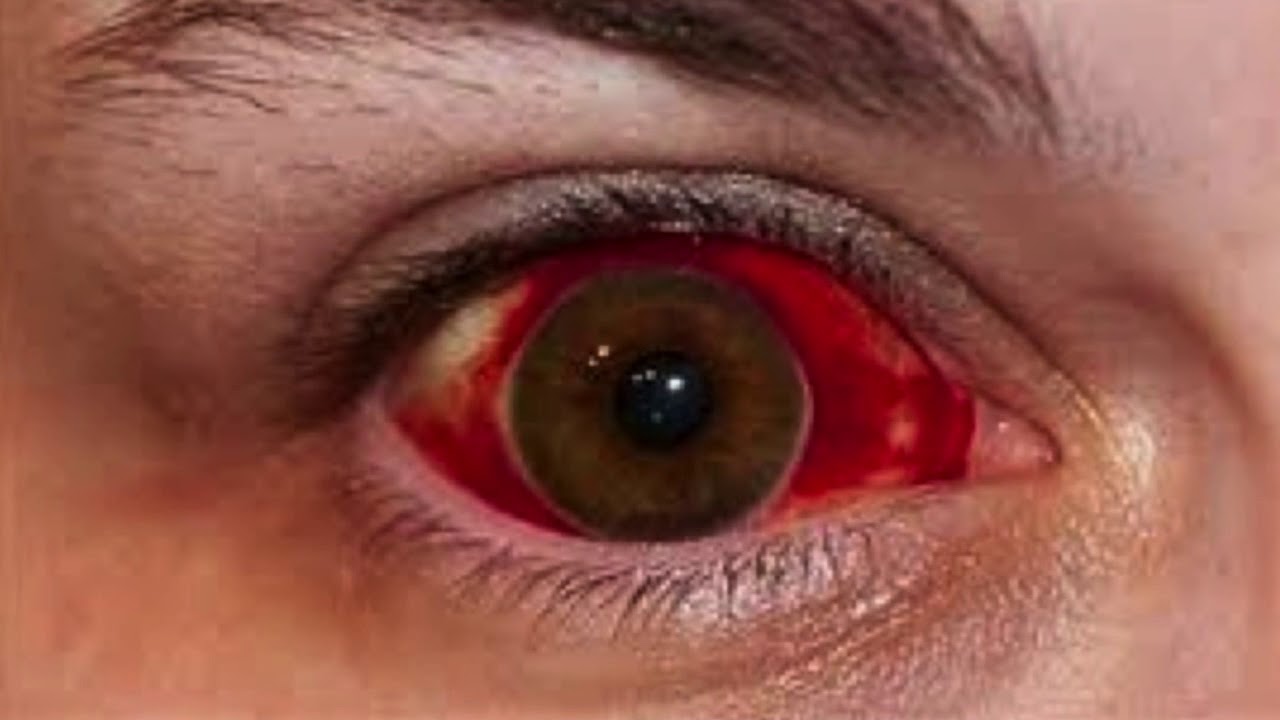 Your red sclera person has blood under the clear conjunctiva that covers the sclera. The conjunctiva stops short of the iris and pupil so the blood does not occlude vision. Subconjunctival bleeds can happen under circumstances of increased blood pressure - vomiting, sneezing, giving birth. They are alarming but harmless. The blood stays red because the conjunctiva is permeable to oxygen. Normally the blood clears in a week or two.

In my answer, the conjunctiva (of a modified human) was used as a surface for gas exchange. If you need to explain why your person has red conjunctiva you could go with that. Or maybe your person sneezes a lot and keeps rebleeding?

Your character has a red eyeball tattoo.

You may have heard about a new frontier in body modification: eyeball tattoos or scleral tattoos. You can easily find photos online (some real, some fake) of people who have had the whites of their eyes colored black or any color of the rainbow. You're also likely to run across stories of people whose eyeball tattoos have gone horribly wrong.

Eyeball tattoos have not been medically or scientifically studied, and the procedure was not developed by a doctor. If done as intended, the tattooist injects ink just under the surface of the conjunctiva, so it colors the sclera – the white part of the eye. If the needle isn’t in exactly the right place, the ink can be injected into the inside of the eye, onto the retina or into the tissue around the eye. Any of these mistakes can have lasting, terrible consequences, including lost vision and ongoing pain. Because scleral tattoos are not a traditional part of tattooing, there is no formal training, licensing or certification process for people doing this procedure.

Since it's autoimmune, it would be very tricky to treat without advanced medical technology, but the symptoms could be treated reasonably well. Since we're talking semi-alien biology, I'd say chronic exposure to salt water would be likely to constantly agitate this condition. So while a "normal" person might hope for the symptoms to relent eventually, their symptoms would be more chronic.

Not to be stereotypical, but this leads to bulging eyes, which seems semi-appropriate for an amphibious person.

Chronic redness in the sclera is a common symptom of glaucoma. Glaucoma is one of the leading causes of chronic eye redness.

Moreover, there would need to be a reason (given this is the cause of the redness) that the alien's eyes are going through drastic changes in eye pressure, on a consistent basis.

You mention they are amphibious.

There are conditions where melanin appears in the eye and turns parts of it brown. A slight mutation to make this appear red would get your effect without harm.

Not the answer you're looking for? Browse other questions tagged science-based biology humanoid diseases medical .

1
If an overabundance of L. Salivarious created a new auto-immune disease, what symptoms would it cause?
23
Mental condition that spreads through social contact
55
What could cause sugary rain?
0
What sounds can someone make with a blocked throat?
8
With as much scientific accuracy as possible, how would chemicals injected in one's body be removed?
11
Can my vampires evolve black sclera?
17
"A disease killed a king in six months. What disease was it?" Fantasy, some magical healing
5
What biologically would cause enforced sexual monogamy, and what could reverse it?