Navigation on a flat earth

I'm trying to come up with ways to find one's bearings on a flat world. Here's a mock-up map I have used on the two previous discussions on the topic. 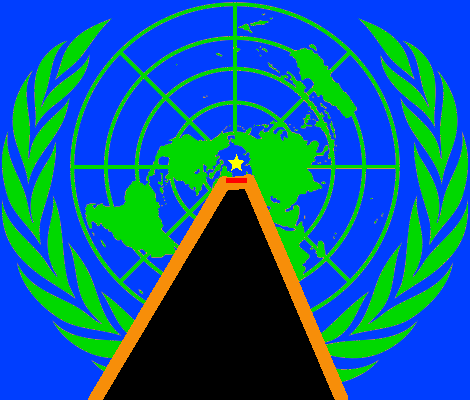 So, we have a flat plane with a sun relatively low above the center and a bunch of sky-island type shades providing the day-night cycle. If you let go of an object you're holding, it accelerates downward at 10 meters per second squared because Things Fall Down, and there's definitely magic involved somewhere, but I'd like to keep the mundane physics as close to the real world as possible. However, there isn't a magnetic field because there is no giant ball of hot iron spinning to create it.

During the day, the sun is of course a landmark you can orient yourself by, and you can find your latitude by the angle of the sun.

But, how would you go about finding your bearings during the night, or with an overcast sky, and how to determine one's longitude? Are there some weird tricks for navigation on a flat world that don't work on a spherical one?

You don't have to see the "sun" to know where it is.

The way you describe this with a "sun" at a fixed point surrounded by shadow squares, you have the same situation as in Niven's Ringworld - any area in shadow is like a cave, because it is always in shadow. A tree will not have green grass growing behind it! Even on Earth people navigate by looking for the mossy side of a tree, but in this scenario that doesn't require nearly so much optimism to do.

Your latitude should be discernable from the shadows of large branches, etc. Your longitude is directly related to the times at which the Sun is visible, so a watch set in Greenwich will still find you the prime meridian.

Still the sun, but indirectly.

The sun disappear at night, right? Where does it go? I assume that the sun and the moon, being spherical non-flat celestial bodies, run around the totally normal flat earth.

The moon's crescents indirectly tells where the sun is currently located. Since the sun is underneath the earth, earth's shadow will shape the visible moon into a crescent which "horns" points toward the sun's current position. Other celestial bodies, whether earth's satellites or even other planets / astronomical phenomenon will be visible in a different light according to where the sun is.

All there is left is a mean to calculate one's position according to how the night sky is illuminated. Also, as the moon and sun moves, the visible shape of the moon will be altered during the night, which is pretty rad.

If it's any consolation, the Flat Earth model that people in the real world have used still includes electromagnetism;- the electromagnetism simply doesn't require the earth as a whole to be spinning in order to take place. In the model, the earth is viewed as a flat torus shape (like that of a CD) with the north pole being where the hole in the middle of the CD would be, with there being magnetized metal underneath the north pole's ice that still contributes to the creation of a worldwide north/south magnetic field that still allows compasses to work.
In fact, electromagnetism also plays a big part in the model's explanation for why things fall down. The model says that gravity actually does not exist, but rather attributes the fact that things fall down to the sky being positively charged and the ground being negatively charged. Basically, the model states that positive electric fields repel objects and negative ones attract them, and that the sky's repelling, positive field, and the ground's negative, attracting field combine to create the force that pulls objects downward. The rest of the model's explanation has to do with fluid buoyancy, offering it as the explanation for why the speed at which you fall down and which substances you can fall through as opposed to float on differ depending on the viscosity of the substance one is falling through (e.g. falling faster through air than through water) and the buoyancy of the object in question (e.g. why a rock will fall through water, but an inflated beachball will float on it).

Also, the Flat Earth model says that there's no such thing as the void of outer space, and that the earth is actually underwater, with the sky being a gas-filled dome of ice keeping us from the waters outside, with Antarctica being where the dome's wall touches sea level (although the upper interior of the dome would probably still be hard to breath in and black as night).

32
Which shape for an infinite world with usual sun cycles?
5
Where would the Sun and Moon be within a flat Earth world?
2
Extrapolating from the GPS network for time travel
8
How to navigate a ringed planet at night?
6
Penumbra colors of a flat earth's sun-shades
4
Days and Seasons via Daily Eclipses in a Flat World
4
What colour would a flat world's sky be?
5
Sun-like sky objects in a flat world?
12
Figuring out the Cosmic Compass (Updated)
5
What's a persistent weather condition that could justify being unable to use the Sun to obtain a bearing?