Is there a reason why giant mechs have optics the size of a person instead of 'normal' sized ones?

It is said that eyes are the windows into the soul. In this case more like big openings to shoot into the head.

Giant mecha robots mimic the human form very closely despite their gigantism. In media this is done for obvious reasons. You wouldn't cheer for a giant octopus thing... well, actually I might. But the most likely reason for this humanization of giant war machines is to serve as a symbol of whoever owns it. It informs the people that this here is affiliated with humans. 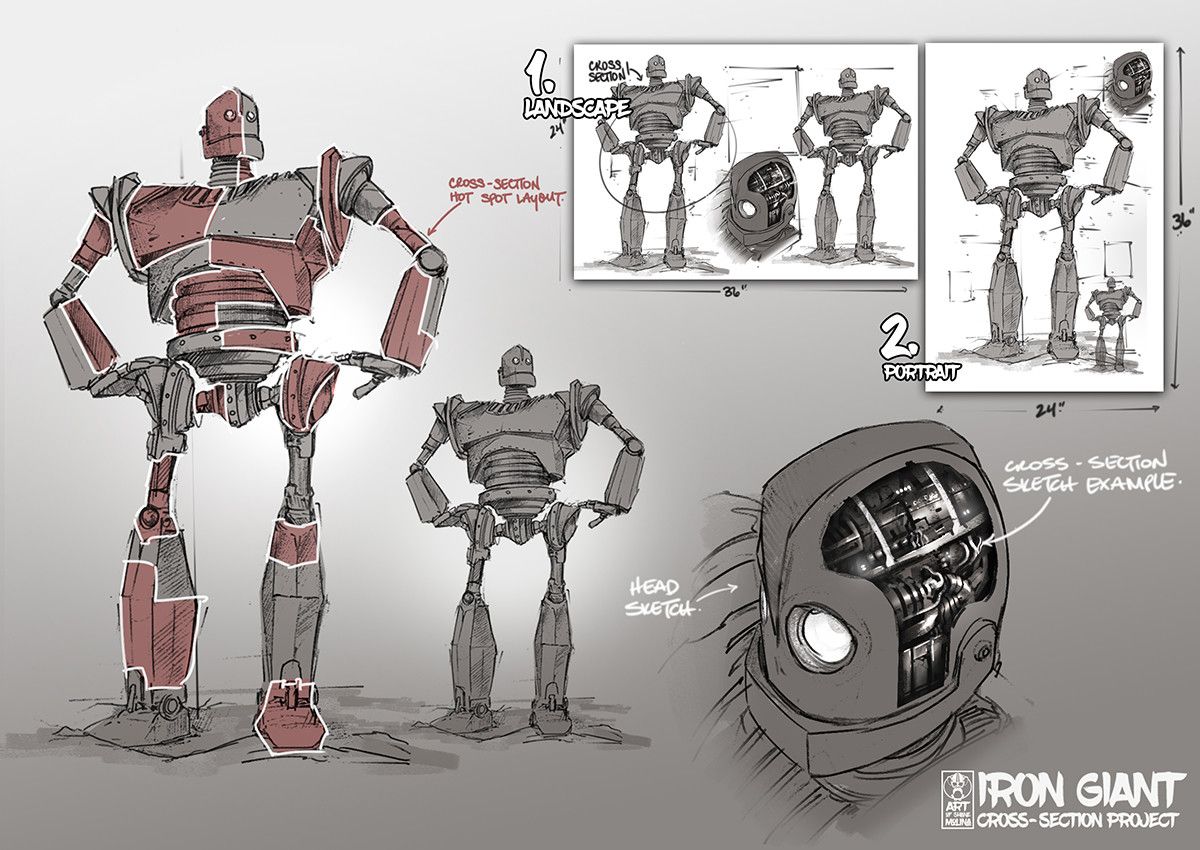 Here's the beloved Iron Giant as an example for my question. There's no human to compare the heights but notice that the eyes are huge (the Iron Giant is about 50 feet tall). The back of the eye sockets may be armoured as a precaution against headshots, however giant robots being blinded is very bad. You either have a radar or little hatch for a little pilot to look outside while simultaneously piloting the huge hunk of metal. Not ideal. The reason giant robots don't have facial windows is precisely because they have a pilot to protect (unmanned mechs are an exception). Even then, I'm not exactly sure why the eyes would need to be so large. I have a few theories but I'd prefer an explanation as well.

Do engineers have a reason to make them so big. What did I miss?

Not only is the humanoid form impractical and inefficient for a machine per se, it's also immensely impractical for a machine which is 10 times the height of a human. Human legs wouldn't be an efficient way of locomotion due to the square-cube law. There is too little gravity and most surfaces would be far too soft for a robot of that size to walk like a human would. It would be like walking in a swamp on the moon.

There is really just one reason to build giant mecha: Aesthetics. You are building a humanoid mech because you want it to look humanoid. Which means that your priority is already aesthetics over practicality. Which also means you are going to give your creation a human-looking face, even when most of its facial features aren't even functional.

So those things on its face which look like eyes aren't actually its optical sensors. They are just for show. The actual optical sensors are much smaller and hidden elsewhere.

The "eyes" on a mecha are not actually camera ports, they're radar antenna ports, which require a much larger aperture because of the longer wavelengths used. They, of course, need to be on the head to raise them clear of objects on the ground and give them the longest possible line of sight. Cameras (in optical, IR, and other frequencies), laser rangefinders, and other instruments do happen to be mounted coaxially with the radars to provide additional target information but it isn't technically necessary for them to be mounted there. One can imagine the internals of such an "eye" to be not unlike the AESA radar antenna pictured here that happens to also have a coaxial optical sensor module at the top.

Why two "eyes" on some mecha? Of course, that's highly classified military information, but speculation by analysts include stereoscopic radar sensing, symmetrical bistatic radar (i.e. transmit the pulse on one antenna, listen on the other to reduce self-jamming), separate detection versus targeting radars, separate operation at different frequency bands for different modes of detecting targets, or even just for redundancy in case of battle damage.

Most answers assume normal bright daylight conditions. So we might as well ask: "Why do telescopes have such enormous eyes, when our tiny eyes work just fine?" The answer, of course, is that to look at very dim sources, you want to collect as much light as you can. And that means making your light collector as large as you can. So giant lenses/mirrors give your mecha the ability to see long distances and/or under very low-light conditions that traditional optics don't handle very well.

Of course, I agree with the other answers that include full-spectrum EM sensing. But even at optical frequencies, having telescopes for eyes could be a tactical advantage under some scenarios.

The eyes are made of a hyper dense alloy that can ignore nuclear blasts.

We see this at the end. The nuclear blast didn't scratch the paint on his eyes. Eyes on humans are more vulnerable because of limitations in construction technology. Mechs can just make eyes from hyper dense alloys.

The head serves as a fire magnet, without actually being essential to functioning.

We see this with Iron Giant as well. All their parts are capable of functioning independently. Having a head with glowing eyes serves to draw fire to a non essential part of their body while not actually increasing their vulnerability.

What looks like huge single eyes are actually gigantic compound eyes, made up of arrays of many individual normal-human-eye-sized ommatidia - it's not so visible from the ground, but the eyes are actually curved significantly outward into a spherical-section shape, with the ommatidia mounted on the outer surface of a swivelling ball.

Imagine something like this, except a circular sphere-section instead of elongated

Compound eyes provide excellent motion detection and an extremely wide view angle, without distorting the outer portions of the visual field like a fisheye lens would. Their downside is poor light-gathering ability and lower image resolution compared to a simple eye of the same size, but making the compound eyes person-sized allows each individual ommatidium to be large enough to have excellent light-gathering ability and resolution on its own, negating this disadvantage.

Additionally, using a spherical-section compound eye allows the eye to be swivelled to face more downwards or leftwards or rightwards or upwards without sacrificing forwards vision, and it provides redundancy - even if part of the eye array is shot out, the remaining ommatidia can still see (with some loss in visual field and acuity in the areas covered by the destroyed ommatidia), so the enemy would have to destroy every single ommatidium to be certain of blinding the robot (and the designers probably also tucked supplementary ommatidia into other places on the head, singly or in small groups, to allow for some vision even with the primary arrays completely destroyed!), and the amount of each compound eye taken out by a single hit can be greatly decreased (potentially down to just a few ommatidia lost even from a cannon round straight to the eye) by separating the individual ommatidia with armored partitions. In contrast, a huge simple eye would be easy to completely disable with weapons fire, while a human-eye-sized simple eye, although harder to target, would still be totally disabled if a lucky shot did hit it.

A larger eye is indeed easier to target with something like a bullet, but if your objective is to withstand optical attacks intended to blind you, then a large detection area for a given field of view (i.e. a given amount of captured incident light), that would result in a lower incident power density over the detector area and thus allow you to better withstand such attacks.

Now, such a design would result in a larger mechanism but the mechanism would not necessarily need to outwardly look larger since while the internal detector is large, the external light collecting element (i.e. lens) could be small.

You could add an iris and zoom mechanism to allow the large detector to be adjust for sensitivity/ruggedness and field of view as desired. That would make it outwardly large.

But another way it could be outwardly large is to use the same large detector with many smaller lenses resulting in a compound eye of sorts. If the small lenses were optically multiplexed to the large detector, and each lens had a small field of view pointed at a unique angle, you would have a system that is rugged to optical attacks with telescopic vision simultaneously with a large field of view due to the stitched image from each small lens.

Since the detector is scanning through the lenses and only looking through one lens at a time, to blind it you would have to pump a lot of power through one particular lens. But since the detector effectively blinking between all the lenses, it would also have some protection similar to the blink response and it could just not return to scan a lens that was lit up too much for sometime. That way, you could not only withstand blinding attacks but you can see around them as well (seeing with your left eye while someone stabs you in the right eye so to speak, just don't look straight at them). Or, as an enemy, you could light up the specific lenses that the detector scans consecutively and heats up too much with no chance to cool but that is tough to achieve if the detector is scanning lenses pointed in opposite directions one after another.

What's the catch? You give up "frame-rate" since you are scanning lenses. But if the scan rate and detector is much faster than your own eyes (or reaction times or enemy reaction times) then you will not notice the difference.

If you are going to have a giant humanoid shaped machine, you are also going to need someone or something to pilot it. The most likely candidates are going to be either a human pilot or an AI based on a human mind. For something so complicated to pilot, pulling levers and pushing buttons to operate is going to be impractical. The most likely scenario is a direct neural link between the pilot and the machine.

So what does that have to do with robot eyes? If you are trying to develop a machine that is directly controlled by a human (or human like AI), it makes sense to make the machine 'inputs' resemble those of an actual human body. The human mind has evolved over millions of years to be able to process sensory input within specific ranges. The more you diverge from that, the harder it is going to be to find pilots who can successfully interface with the mech. Giving your mech 360 degree vision and infrared sensing isn't going to be much use if you can't find a pilot who can handle that sensory input.

So if all of that is true, why not make the 'eyes' as small as possible? The size of the eye 'sensors' is going to determine how much light they can take in. If they work anything like a modern digital camera, having a larger area allows for a faster refresh rate without making the image too dim. At the same time, human vision is binocular, so you need to maintain the correct ratio of distance between the eyes to allow for proper depth perception. Combine those two requirements and you get boundaries on how large or small the eyes can be.

Not the answer you're looking for? Browse other questions tagged engineering robots mechs .

13
Why do generation ships have large rectangular shaped portholes instead of round ones?