How to justify small Hominids not being conquered by (anatomically modern) Humans?

So in my setting there's a group of Hominids distantly related to humans.

They live in a forested continent on the coast of which humans have created colonies.

They have patchy light brown skin for camouflage, practically no sexual dimorphism, and sharp claws and canines. They have triangular ears on the top of their heads like a caracal (see image). 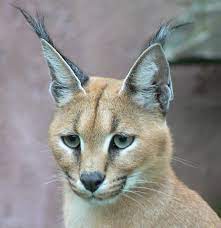 They are only 3-4 feet tall and proportionally more slender than the average human. This makes them smaller and weaker but also faster and more agile.

They're pretty much as smart as humans, but naturally less aggressive and ambitious. Some tribes closer to human contact have been able to create simple copper tools by themselves but for the most part they're basically just neolithic hunter gatherers.

With their societies at large having real ambition to advance beyond that, being far too obsessed with agricultural magics.

The most advanced society that they've indigenously developed is a sort of "hunting party/war band/cult" of around 50-100 where the individuals vote for their leader.

The problem lies in the fact that the humans are incredibly advanced by comparison, the great powers have technology on par with early Sasanian Empire/Late Roman empire. Bronze working and Steel working technology has existed for thousands of years by the start of the story among humans.

So how can I justify these beings (Dryads?) not being conquered and slaughtered/assimilated by human invaders who could so easily wipe them out?

Refraining from the boring "the humans think they're sacred" or "they have a force field" as much as possible would be appreciated.

Why would the human empires even bother?

A pre-modern empire doesn't go and conquer territory simply because it can. Administering a conquered land is expensive. You need to clear the forest, build roads and aqueducts, defend the frontier, administer justice, ensure public peace... So that the empire does not seek to expand into a new territory if it cannot extract sufficient tax revenue to bother with the hassle.

In short, there must be something there which the empire wants. The Roman empire stopped expanding in the 1st century CE, because there was nothing around it worth conquering, except the Persian empire in the east, and conquering Persia was beyond their power. But the vast northern forests, the great eastern plains and the endless southern desert were not worth the effort, and they made no attempt to conquer them. Similar for the Sasanian empire; to the west was the Roman empire, and that was attractive, but they were not strong enough to grab it: but to the north and the east, they stopped expanding. And between the two empires was Arabia, and yet neither of the two bothered to conquer it.

The point is, a pre-modern empire is severely constrained in what it can really grab and hold.

Distance is also great demotivator: for example, the Romans knew that there was habitable land somewhere south of the great desert which marked their southern boundary, but it was simply too far away. A pre-modern empire cannot really project force that far away.

Another factor to consider is manpower. We are accustomed to think in terms of the modern world, where we have an abundance of humans. But this is a very very recent situation. Throughout the vast bulk of history, population densities were very much lower than today. A pre-modern empire faces hard constraints with respect to how many people it can engage in conquering faraway lands; generally speaking, pre-modern empire vastly preferred conquering lands which already had lots of people, because having lots of people meant a vibrant economy, possibility to extract taxes, the ability to organize those people to defend the new boundary, and a reservoir of workforce for the roads and aqueducts...

For an appropriate example, consider the boundary between Roman Egypt and the Aksumite Empire. Aksum was theoretically much weaker from a purely military point of view; but the boundary (at the Elephantine Island, just north of the first cataract of the Nile) was stable for many centuries -- simply because there was no way at the technological level of the Roman empire to mount a serious offensive so far away, and because any reasonable emperor must have realized that even if Rome prevailed, the semi-autonomous rulers of a remote province would always be tempted to rebel and proclaim independence.

Or consider the Turkish empire(s). The Seljuk and then the Ottoman Turks could have annexed the great steppe north of the Black Sea at any time between the 12th and the 16th century. But they didn't, and they never even gave it a second thought. Why bother with it? It is sparsely populated, the inhabitants are poor and belligerent, the land is not suitable for the Mediterranean style of agriculture, there is a scarcity of water, and winters are terrible. So what they did is they maintained an arms-length sort-of-friendly relationship with the Tartars of the Golden Horde and otherwise left them alone.

For a setting much closer to modern times, consider the Great Spanish Mexico, officially known as New Spain. On the map, the Spanish empire included most of what it today the United States of America. But in reality, of course, they never even tried to administer the bulk of that territory; in principle, the Spanish empire was much stronger than the Indian tribes who lived there, but in practice Spain never had any motivation (and definitely not the man power) to go and explain to the Indians that they were subjects of His or Her Most Catholic Majesty and they should pay taxes. When the United States of America started to expand westward, they never met with any Spanish opposition...

So it is enough if the Aelurodryads live in a great forest or on an endless savannah somewhere far from the center of power. There is nothing there for the human empire to lust after: the catty elves have no gold to speak of, they are dirt poor by the standards of the empire, there is no hope of taxing them, and overall making them into a province of the empire would be a financial disaster.

A lot of invaders have been decimated by diseases they encountered along the way. The inland might be affected by a plague to which your Hominids may have developed a natural resistance. And even if your Hominids have no natural resistance for the human colonists arriving in small numbers it might be scary. Consider the case of Attila, he defeated the Romans and the way towards Rome itself was open and offering only small resistance, but a disease, probably an epidemic of malaria forced him to abandon his plans.

A lot of empires in the past accepted a tribute instead of invading the land of the defeated people. When soldiers are scarce a compromise is better than nothing.

They are protected by a dense Jungle

A lot of tribes in the Amazon survived for centuries after the Portuguese annexed their land. Certain areas were unreachable.

BTW. Many of the points above are not absolute, but a matter of time, meaning that eventually the Hominids may be annihilated, for something that could last until the decadence of the human species certain conditions should be extreme.

The same way hunter-gathers have survived to this day, by living in places to separated from agricultural societies either by distance or conditions. 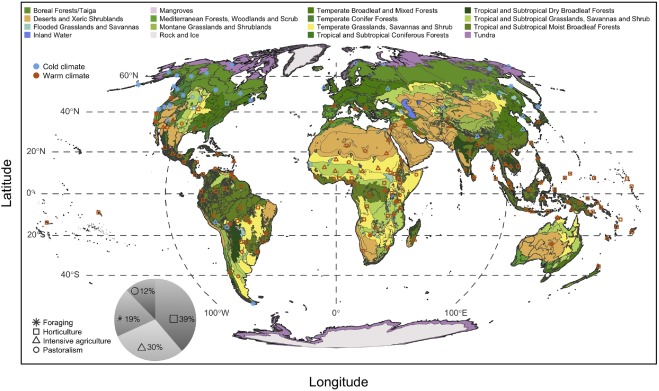 If it is worth taking more technologically advanced societies will take their land either intentionally, through competition, or through consecutive conflict.

Their agricultural magic is more valuable if they're left alone.

They can produce a lot of very useful and valuable crops. Humans who live near them can make a massive profit from trading with them for their crops.

Unfortunately for war mongering humans, their magics only function well so long as they have a fairly unmolested society. Empires and kingdoms which killed and enslaved their dryads find the magic dries up, and they are useless.

Then rivals who want the money overthrow the fools who conquered the dryads, and let them live in their society again.

It is in fact a common saying "Slaughtering the golden dryad", to indicate an idiot who wastes a valuable resource. Such idiots do exist, but their companions who like money quickly intimidate or kill them.

Acclimation. Your primitives can live in a region which is intolerable to "more advanced" species. Perhaps the forests in which they thrive rise from brush and wood species which have poison ivy/poison oak style defenses against most mammals. Perhaps their flower spores are extremely irritating and their rivers team with virulent filovirus making them deadly to all who drink from them...

...except the primitives and their prey animals.

Your Humans have a bad case of Noble Savage-ism. To them, the Hominids are cute, dumb, and nonaggressive. So, they are more valuable as ego-boosters. They don't rise to the level of needing to be conquered, for then they'd be much closer to being equivalent to the Humans. See: Facing History: The Noble Savage and The Guardian Education: Racists Created the Noble Savage

They are sensible and courageous.

Consider Homo floresiensis. These plucky little guys lived on an island in Indonesia. Note this means that, apart from ridiculous Rube Goldberg rafting-vegetation fantasies concocted in the misguided pursuit of "Occam's razor", they were capable of building boats and sailing the sea.

Homo floresiensis lived on an island famous for its Komodo dragons. I don't mean the terrifying, dangerous, mean-tempered lizards with bioweapon teeth that terrify modern tourists. No, I mean Megalania prisca, a 23-foot long version of the Komodo dragon. They did not merely live on the same island during recent history, but side by side. How do we know?

The cooked bones in their garbage pits!

If these plucky little folks could stand off a species of mythical monsters that would send modern humans screaming in search of army helicopters and 50-caliber machine guns, I think they could have dealt with a few Romans just fine.

If you need more convincing, just think about the biomass. How many Romans can the island support? Now how many of your little people can that same island support? Equally matched in land area, give them both the same weapons, bows and arrows or darts or javelins, and brick up all the holes that only little people could hide in, but you have twice as many little arms making twice as many shots, who do you think is going to win? They have beaten the brain-to-body efficiency game, and the only thing keeping them from taking over the planet is a lack of desire to.

Not the answer you're looking for? Browse other questions tagged technological-development military military-defense assimilation or ask your own question.

39
How could intelligent animals defend against humans?