What Could Explain A Solitary Mountain in a Grassland?

That title is probably way too specific, but essentially I'm trying to develop my book's setting. Currently, my characters (a team of six adventurers) awaken as amnesiacs who were once human but now have been transformed into a motley menagerie, within a grassland. This hilly grassland has a road running through the center of it, and at one point, there lies a small mountain next to the road.

This mountain is rather important, as carved into its interior is a town named Rockhaven, where a plot-important SC (supporting character) awaits the team. What I don't know is what would cause a solitary mountain to form in the aforementioned biome-a grassland with rolling hills and plains-akin to the Kansan prairie. So, as you can see, my question is What Could Explain A Solitary Mountain in a Grassland?

I got your solitary mountain in a grassland right here!

Devil's Tower is the basalt core of an ancient igneous intrusion. The surrounding softer stone has weathered away leaving the tower in a grassland.

First thing that came to my mind was Mount Kilimanjaro: https://en.wikipedia.org/wiki/Mount_Kilimanjaro

Highest solitary mountain in the world, surrounded by savanna grassland. Obviously, it's a volcano.

It's the place where the great snake king, Wanambi, who resides at the top of the montain and only comes down to ground level in the dry season. His breath can turn a breeze into a hurricane, punishing those who committed evil deeds in the region.

Kata Tjuṯa, (Pitjantjatjara: Kata Tjuṯa, lit. 'many heads'; Aboriginal pronunciation: [kɐtɐ cʊʈɐ]), also known as the Olgas, is a group of large, domed rock formations or bornhardts located about 360 km (220 mi) southwest of Alice Springs, in the southern part of the Northern Territory, central Australia. Uluṟu, also known as Ayers Rock, located 25 km (16 mi) to the east, and Kata Tjuṯa form the two major landmarks within the Uluṟu-Kata Tjuṯa National Park. The park is considered sacred to the Aboriginal people of Australia.

Uluru is sacred to the Pitjantjatjara, the Aboriginal people of the area, known as the Aṉangu. The area around the formation is home to an abundance of springs, waterholes, rock caves, and ancient paintings. Uluru is listed as a UNESCO World Heritage Site.

All good answers so far in addition a tor is also an option. Tors usually occur where igneous rocks, usually granite, that were deeply intruded into softer rocks are brought to the surface by weathering. This usually creates quite high, steep, hills, usually of bare rock even in otherwise lush surroundings, in the middle of flat fertile bottom lands.

Volcanos. An example is the Sutter Buttes in California's Central Valley: https://en.wikipedia.org/wiki/Sutter_Buttes It's the eroded remains of a volcano, surrounded by flat land, and was almost certainly a larger mountain in the past.

A somewhat similar example is Mount Shasta. Although some of the surroundings are mountainous (though much lower), some of the surrounding area, especially to the north is fairly flat grassland. Shasta also has a set of legends which describe it as housing a city of advanced beings: https://en.wikipedia.org/wiki/Mount_Shasta See also the Heinlein story "Lost Legacy". 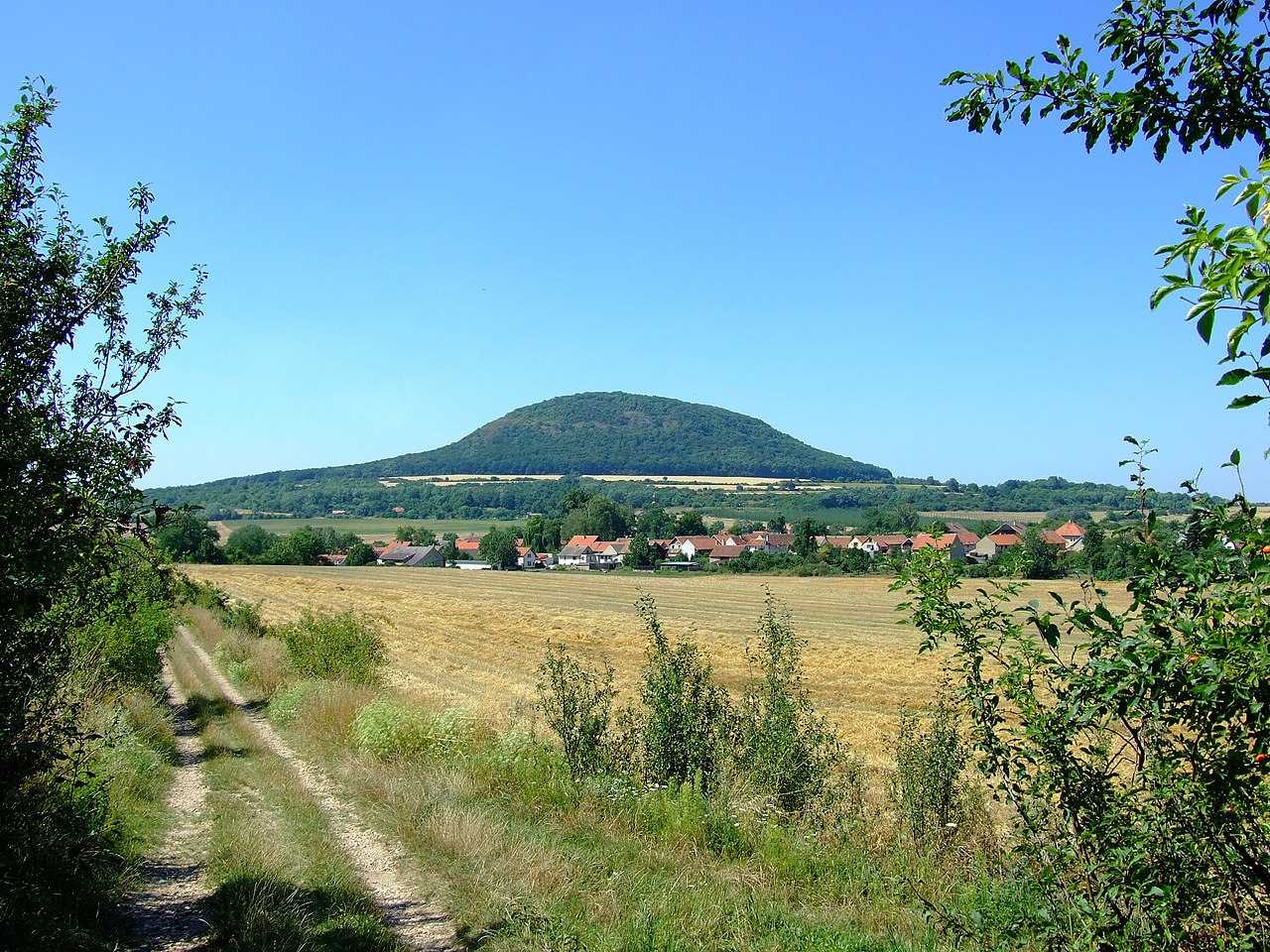 Another example is Říp hill in Czech Republic, remains of a tercer-age basalt intrusion or a volcano core. Even though it's related to other contemporary volcanos from a nearby mountain range, this hill stands alone in a gently rolling countryside. (img from Wikipedia)

Ancient meteor strike. Large meteor craters have flat bottoms (your plain) and a large central peak (caused by the ground directly under the impact rebounding).

See https://en.m.wikipedia.org/wiki/Complex_crater for some examples.

In ancient times, before the birth of America, even before the people we know as Native Americans populated the plains and rolling hills of the North American continent, there were a mysterious society of technologically advanced people known as the Mound Builders. To this day, people are still discovering their massive works hidden in plain sight, having been mistaken for centuries as naturally occurring hills and mountains. Some of these enormous man-made mountains were used as grave yards for the elite VIPs of their culture, others seem to have been designed to be sanctuaries in the event of sudden, catastrophic flooding, but most of these "mounds" were built for reasons that still evade explanation. Iowa, Kansas, Nebraska, Illinois, Missouri and Minnesota were favored by these people for mountain building, as the miles upon miles of flat land emphasized their work's looming presence on the landscape.

Just to give an alternative to (dead) volcanoes or volcanic intrusions:

A salt dome may push a solitary rock or hill upwards, examples are the Segeberger Kalkberg in Bad Segeberg, Germany, or the off-shore island Heligoland (imagine a lower sea level to place it in a grass plain).

Since there is a town in the interior of the mountain, perhaps the "mountan" is acutally a gigantic building built to contain a totally self enclosed habitat, including the town, reached by a few airlocks leading to the outside world.

And maybe the outside of the building has slowly weathered and assumed a more rugged and natural shape, although it still looks very artifical compared to most real mountains.