A Weapon To Control The Population

It is 2039 and after a long and bitter struggle, the people of Molvania, under my guidance, have thrown off the shackles of the previous dictator's oppression, and have embraced the new and shiny life of struggling under my oppression instead.

My particular personal gifts have made my ascension easier, but I am no fool.

I need a sure-fire way to control my s̶l̶a̶v̶e̶s̶ ̶m̶i̶n̶i̶o̶n̶s̶ ̶s̶u̶b̶j̶e̶c̶t̶s̶ loving citizens. I have tasked you, My I̶g̶o̶r̶ Lead Scientist to deliver such a weapon. I am inclined towards one that would deliver a delightful death by having many little daemons placed inside people waiting for my command to run amok, but the pentagrams are a hassle to draw, so I remain open to better, more practical suggestions.

I need a weapon that can:

Here's a little picture I made of my idea in Paint: 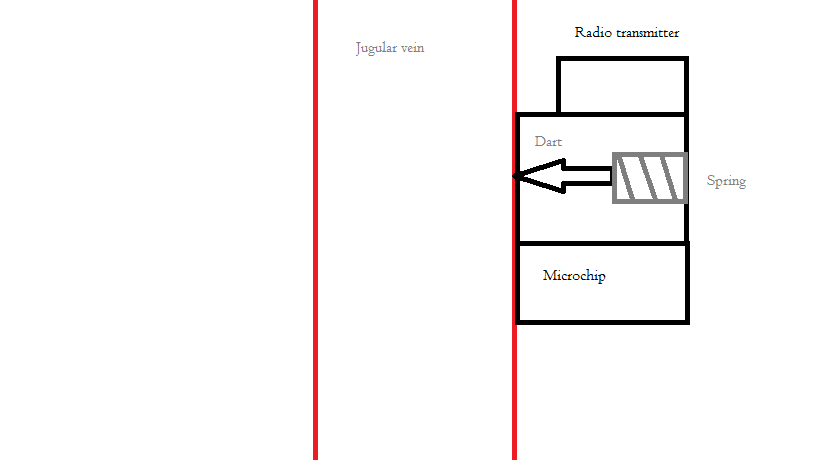 Hopefully, the labels make it pretty clear what all the parts are and what they do. However, I'll explain the steps in detail.

Ah, you say, but I mentioned weak radio reception. There's a solution: A dead man's switch. All you do it not transmit a signal at a pre-approved time and the dart is fired.

You can substitute in different things for the dart. Poison is the obvious choice, but it's boring to depict in Paint, and an antidote could be found. Darts are harder.

Implantation might not be simply, but it probably wouldn't be lethal. The dart doesn't have to hit directly, just enough to cause a hole that will quickly bleed.

Better still, implant multiple darts in other crucial places, such as the carotid artery. That makes recovery hard, if not impossible.

Help your subjects have strong hearts!

Without providing too many details about the actual device, I would recommend using something I am developing at my day job. An injectable pacemaker. 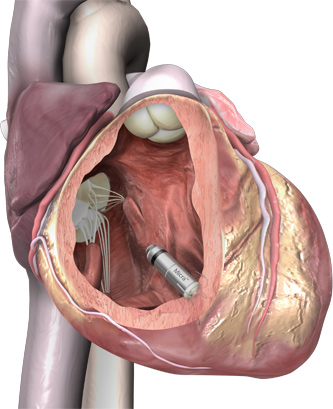 The pacemaker above (called a leadless pacemaker) is inserted through the femoral vein and hooked on the inner wall of the heart.

Using this pacemaker has several advantages:

Just remind everyone to stay calm and loyal, they don't want their heart racing for no reason!

Giant Death Ray from the Sky!

A fleet of giant fusion powered blimps flying circuits around the country with coverage such that they are able to see into every nook and cranny of the country. Mount a giant gigawatt IR laser to each blimp. As they are nuclear powered, they can stay aloft for months at a time...kind of like submarines, only in the air :)

Sell your minions the propaganda that the blimps are keepers of the Glorious Revolution! Show them movies about how they have crushed the Great Satan Americans in glorious battle after glorious battle!

Issue state controlled cell-phones to all inhabitants above age four. Make the phones incredibly useful so that people will not want to be without them but also make a law that people are not to be without their phones. Issue new phones regularly. The phones double as ID. No ID == "disappearing" and blood donations ;) In each phone is a GPS that is transmits its location to your secret command bunker. The microphone and the camera in the phone can be turned on at will without the owner knowing about it.

With the GPS locations of all your victims, er, minions, er, citizens, should some of them turn pesky, you can direct a billion watts of invisible insta-death direct to their location. With that much power available, you'll likely generate steam explosions from the water in the rocks heating up so fast. Even if you can't kill the pesky, deeply-buried minion immediately, you can certainly seal the exits and let them chock on their own rebellion ridden breath.

But Boss! How do we keep the generals out?

Easy. Build the firing system so that it only fires with a proper cryptographically signed order. The crypto chip that holds the private key for signing fire orders is embedded in a medallion that hangs around the Dear Leaders neck. It can only be unlocked by providing a four digit PIN, and handprint scan. The handprint scanner looks for heat, sweat and a pulse before it will authenticate.

The firing controls on the blimps are hard interlocked so that they can only be fired by a signed fire order from the secret bunker by the Dear Leader's authenticated key. The blimps only receive coordinates to fire at. They don't know what they are shooting at. During strikes, some other people might die. Too bad for them. Don't be near traitors!

The crews of the blimps are your most trusted minions who have made previous "blood donations" and are thus assured their loyalty.

Use the premise of "Protection"

"Protect" your citizens using armed police drones. Now that you're in charge, you're free to install satellite(s) that keeps track of any and all citizens and drones at the same time. To kill someone, simply issue a command to the satellite, and let the satellite(s) send drones to assassinate him.

Since the police drones are commonly seen, no one's going to bother hiding from them since you tell them "it's for your protection". You can even assign specific drones to your generals to allow for faster dispatch. While this doesn't exactly fulfill the "instakill" requirement, if you have enough drones, you'll essentially have "insta-kill" (or as close to instakill as any other method - bleeding out or poison also takes time, a well placed gunshot might be even faster, but would probably amount to the same amount of total time if we factor in the traveling time for the drone(s)).

Drones are ONLY controlled by a heavily encrypted code from satellite(s) to drone. Ideally one that changes every hour or so, such that no one will ever be able to directly hack a drone (and even if they do they can't control it for long). Satellite(s) can be very secure and nigh unhackable if you include bio metrics in your communications to the satellite(s). In order to make it even more secure, make sure you carry a digital encoder with you. This encoder contains the same code generator as the satellites, and will change at the same time as the satellites such that you'll be able to communicate securely and safely.

This is fairly "safe" to administer. It doesn't exactly touch your subjects, so there's less invasion of privacy. Furthermore, since you don't need to do an operation on every person, the drones may be faster to deploy overall.

The drones may be killed, but if you kill one, more will come. If you send up multiple satellites, they can all communicate with each other in order to execute your commands. If one gets shot down, no problem - you'll have 5 or 6 more in its place. If you give each of your satellites anti-missile weaponry, then the system will definitely fulfill your "Cannot be disabled, except perhaps with great difficulty" requirement.

This system can be triggered from anywhere since you're using satellites. Even if you don't have normal reception, you can build your bunker(s) to include external antennas. (I'm pretty sure you can get satellite reception through bunker walls though)

Not the answer you're looking for? Browse other questions tagged weapons vampires or ask your own question.

37
Could an unusually long lived being continue to learn with the times?

24
The new rioters weapon of choice
4
The ultimate weapon from nowhere
1
Weapon Control Over a large area?
0
Remote Control Bullets