What if all life disappeared from the earth?

What if all life (plants, animals, bacteria, fungi, and everything from the smallest cell to the largest whale) disappeared instantly?

question here: What will the Earth look like after 50 million years of the disappearance of all life?

Without lifeforms continuously cracking oxygen from gaseous oxides (mainly CO2, and Sulfur and Nitrogen Oxides) the atmosphere would revert to something like it's preoxygenation composition as much, all?, of the carbon currently in long-term sinks like peat and coal will be oxidised. The exception is probably methane, there will be little to none because there will be no methanogens producing it and it oxidises to CO2 and water relatively quickly. The atmosphere is going be high in greenhouse gases and will warm rapidly, and continuously. After 50MA Earth will be a wetter, lower pressure, version of Venus, the atmosphere will be actively acidic and there will be higher surface pressure due to high levels of water vapour and the liberation of gas forming elements from biogenic minerals and existing organic deposits. The high levels of sulfur and nitrogen oxides in the atmosphere will give it a brown/yellow haze/smog.

It would look like a barren planet, something along Mars, with just a thicker atmosphere and maybe more water.

Though all life is gone, so there is no biological agent to decompose organic matter, geology is still active: sediment deposition will cover and hide any biological trace, and what will remain will be rock in different stages of weathering. 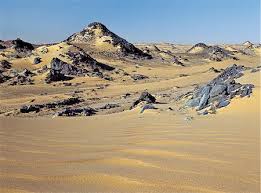 Basically what you can see in most of our current dry deserts. With at most ice/snow where it falls.

If we're talking specifically about what the planet would look like, then fields of grass would be reduced to nothing but soil, forests would be reduced to deserts or barren wastelands, and there would be no more coral reefs dotting the ocean floors. As you'd probably expect, anywhere life has once stood is now desolate and empty.

Considering that this is only going to affect biological life, anything manmade or artificial will probably still be standing proud for a while, but after millions of years, erosion would eliminate most of it. Buildings, even the most well-made ones, would surely be reduced to rubble. Only the sturdiest manmade items would survive.

Photosynthesis would come to a complete stop, so there would be no new oxygen made. We have also eliminated life breathing out carbon dioxide, so it seems like the levels of it would be stable. However, volcanoes would most likely be pumping out large amounts of CO2, though, so the balance would undoubtedly be thrown off. Without plants constantly making more oxygen, the air might be near unbreathable after a while, especially after millions of years.

One thing I have not seen mentioned yet is the effect of nuclear power plants or other similar things would have after being abandoned and falling into disrepair. Humans have a lot of toys that they mess with. If they are completely abandoned for thousands of years, even the most well-made ones will break apart and contribute to this wasteland. Artificial materials would erode bit by bit and add a lot of unique features to this land of desolation.

Without life, the world would be a living hell, but, at the same time, if no one's there to witness the destruction, then there's no reason left to care.

Not the answer you're looking for? Browse other questions tagged weather life climate-change extinction .

2
What would happen to life on Earth if the planet had total cover of permanent clouds?
3
What is the quickest way to perfect global warming?
3
What is intelligent life?
7
How to wipe out ALL life on Earth, but leave it habitable?
6
Hanging World - Trees
5
A hurricane that stays in one location
2
What Size and Likelihood Of An ET Impact Would Destroy A Small County Sized Region But Not Our Species?