You find yourself on a world with no gunpowder...don't ask why...or how you know that there is no gunpowder there just isn't any available to you, nor are alternative propellant options available (work with me here).

You are preparing to defend an otherwise modern era (there are obviously some other differences...) city from an invading horde of savage aliens. You are vastly out numbered and looking to create weapons that can mow down the legions preparing to attack you.

What methods are available for creating a powerful rapid fire weapon?

You have a few remaining options. Air, electricity, and alternative explosives.

Pneumatic Gun
A pneumatic weapon uses compressed air or steam to accelerate a projectile. There are rapid firing potato versions, so I don't think you'd have trouble making one that fires bullets instead of spuds. However, the power will be difficult to get up to gunpowder replacement levels. Steam will be easier to use than compressed air, but may not be as easy to store.

Gauss Gun
A gauss gun works by triggering successive electromagnets to pull a projectile along the barrel. You can actually get a higher energy output than a gunpowder weapon, but the repeat rate may be lower if the power output of the generator is not high enough to recharge the capacitors quickly enough. However, you could simply use many interchangeable capacitors banks or a massive generator.

Railgun
A railgun is similar to a gauss gun except the projectile is part of the circuit for generating the electromagnetic force. This reduces timing complexities but increases the required precision of the gun and projectiles. As with the gauss gun, higher power output than gunpowder is possible and it will require significant energy storage to fire rapidly.

Alternate Explosives
There are a lot of explosives other than gunpowder. You can use lots of different types of high-explosives to launch projectiles. Presumably, you don't want this though, so I won't expand much.

Centrifugal Gun
As for your question on using centrifugal force. With that clever naming gun people are known for, there is the centrifugal gun. It can be hand-cranked or powered by compressed air/steam. 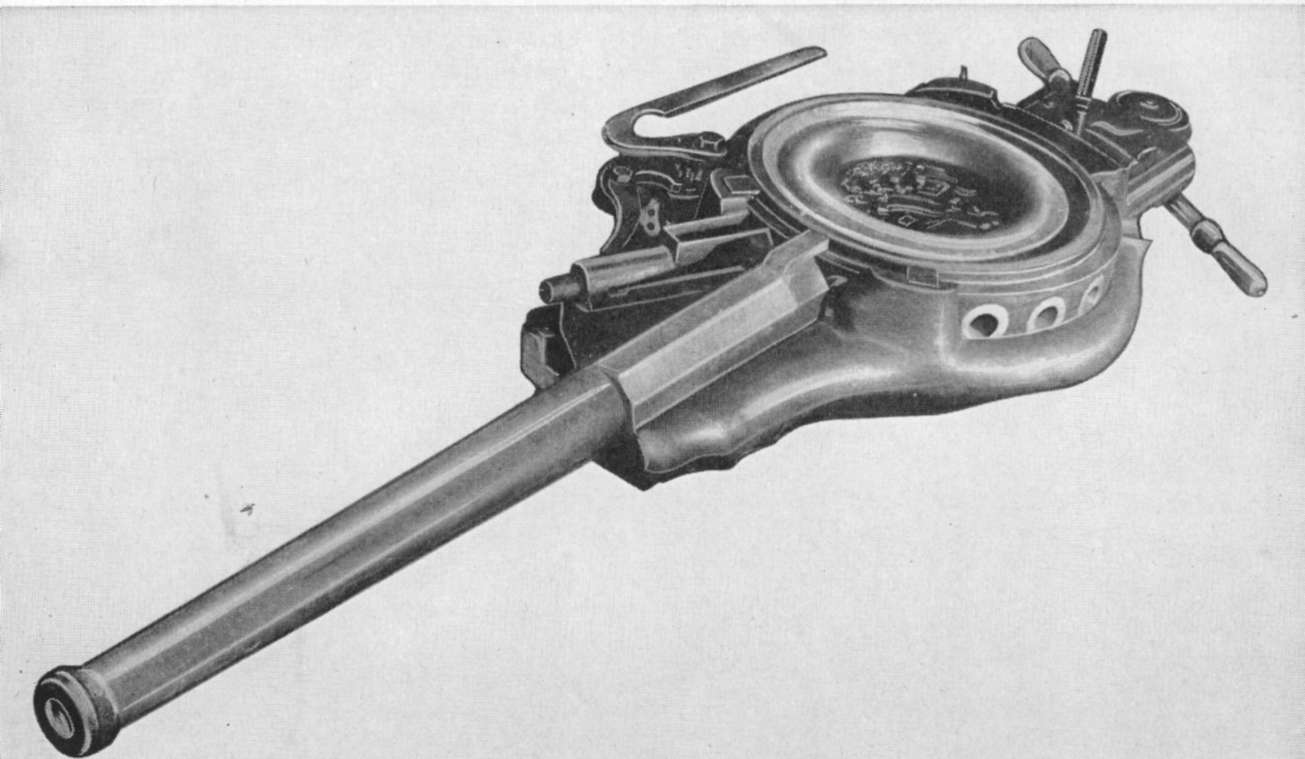 It has been tested several times in the US and billed as the "silent machine gun" but has always been abandoned due to extremely poor accuracy. This makes sense, with centrifugal force the projectile can't be accelerated while it's being guided down a barrel pointed at the target. Either the power is reduced while sliding down a barrel or the accuracy is all in the milliseconds that the projectile is released from the spinning accelerator.

There is a patent on a centrifugal gun from 2003 called DREAD which claims to launch projectiles with the speed of a handgun (300 m/s).

As a reference, unless I messed up my math the energy it takes to accelerate a one-ton vehicle to 60 mph is roughly the same as the energy to accelerate around a thousand bullets to 1,000 m/s, which is about what a .50 cal fires at. So the energy is there to have a high rate of fire, you just need to figure out how to transfer it.

This has some downsides that would keep it from being something we'd use:

But when you don't have gunpowder at all, and you're presumably defending a city so fixed installations are workable...

The major advantage, of course, is that you probably have a ton of vehicles currently available. And it's going to be a lot easier for you to convert existing engines into weapons, than to build a ton of new guns from scratch.

All weapons come down to the transfer of energy. Samuel's answer listed several, all of which are based on a projectile as the energy transfer mechanism. Of those, a gauss or railgun are the most appropriate, especially since you did not mention any other limitations on technology. Instead of a chemical propellent based charge, each round could consist of a charged capacitor and a projectile in a specially designed case. A magazine would be capable of holding a number of these rounds, providing you with an analogue for the current chemical propellant based firearms we use in the real universe.

An alternative could be using radiation as the energy transfer mechanism - lasers or masers exist now that are capable of taking out enemy aircraft and missiles. In our universe fire-rate is an issue, however I am certain that in a world without chemical propellant, (and I therefore assume without chemical propulsion such as the internal combustion engine) the technology around electrical power storage and delivery would be more advanced.

Since most potential energy sources are either very limited and much lower power than the chemical energy stored in gunpowder or would require massive infrastructure (electrical energy weapons like coil guns or railguns, the best solution would not be to rely on rapid fire or kinetic energy, but on creating explosive or flame warheads.

A small crossbow with the equivalent of a hand grenade strapped on the quarrel will do a lot more damage than a crossbow bolt on its own. A trebuchet or ballista can hurl warheads the size of buckets to large drums, increasing the size and effect of the warhead. Since the stipulation is no gunpowder, the explosive effect could be through the release of a flammable dust on impact (this can be simulated using coffee whitener powder, or in industrial settings with coal or flour dust suspended in the air). If ignited by an on board fuse or a following shower of flaming arrows, the explosion is a "heaving" fuel air explosion, which can crush bunkers and fortifications, or even damage tanks and armoured vehicles, so the horde of aliens are vulnerable unless they are using even higher technologies like suborbital vehicles and force fields.

Clean energy power is all i can think of. Wind, Solar, some way for water propulsion etc..

You also have spring and tension forces as well such as catapults and bow and arrows.

Maybe some sort of electric battery as well similar to blasters in star wars and star trek.

I don't know if your going to be able to achieve 80% power of a .50 cal without a more "violent" reactive substance. You would need tornado powered wind forces to get close.

Not the answer you're looking for? Browse other questions tagged alternate-worlds weapons or ask your own question.

12
Space weaponry?
6
How would rapid healing affect modern small scale combat tactics and weapons?
2
Creating a steampunk-esque/cybernetic “Big Iron” revolver
24
How to build a Blood Gun?
3
Ultrapowerful chemical propellant for guns
1
Could a steel cylinder punch through plate armor?
6
How to defend a sailing ship from a wyvern
7
Dedicated castle assault unit