Feasibility of Giant Butterflies as Predators

I have asked multiple questions about giant caterpillars, now it's time to account for their evolutions. Sure, giant flowers could and probably would exist in Alendyias; an Engorger dying in a flowery meadow would likely create a whole patch of giant flowers right off the bat, a dying Bloat Blob could definitely make a giant flower (as explained here, and a dying Wild Anklebiter would definitely engorge a nearby flower, so it could happen.

However, given that giant caterpillars are either partially or entirely carnivorous, there is another possibility, one that seems a little easier to pull off than giant flowers. Vampire butterflies! Giant flowers aren't exactly common, and they'd be a big change to my setting, but giant creatures already exist in Alendyias, have since the beginning, and could easily serve as a food source for giant butterflies if they just feed off blood instead of nectar.

However, I must ask; is it feasible?

More specifically, given that giant flowers can and will exist in Alendyias, would predatory giant butterflies develop anyway, or would they be predatory only in their larval stage?

EDIT: These butterflies are giant because of magic, just like their larval stage. 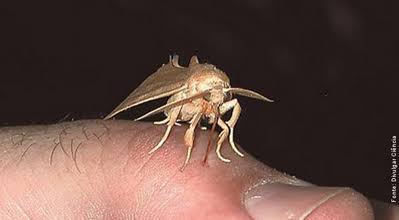 Meet the siberian vampire moth. This little critter is believed to have evolved from moths which themselves would feed on the sweet contents of fruits, and like some other moth species, it's believed that this diet originated from the process of adaptation in order to feed on tears and other fluids from animals (also yes, there are moth species that pierce the skin of birds to feed on the salty contents of their lacrimal glands).

Essentially, apart from the necessary adaptations in the digestive track necessary to make the most out of a predominantly liquid diet, which many butterflies and moths already seem to do to an extent, all you need to achieve this is to make the tip of their long mouthparts, already adapted for drinking, into a more harpoon-like structure capable of piercing the skin.

So overall the presence of real life examples and a lifestyle already mostly adapted to a similar type of diet makes it pretty likely that your butterflies could feed on blood.

Now, let's talk about the problems associated with a hematophagus diet:

So essentially, it's very likely that your butterflies could have a blood-based diet without problems, because we have real life confirmation that it's possible. The big wrench in the gears here is that, overall, a mostly blood-based diet is incompatible with a predatory lifestyle, with most of if not all animals that feed exclusively on blood acting as parasites to larger, normally warm-blooded animals.

"but I want them to be predators and have a liquid diet, what do I do?"

Then you need to look at a different strategy: instead of simply adapting to feed on blood, your butterflies would need to adapt to a different type of liquid diet: one more like the Japanese water bug's. 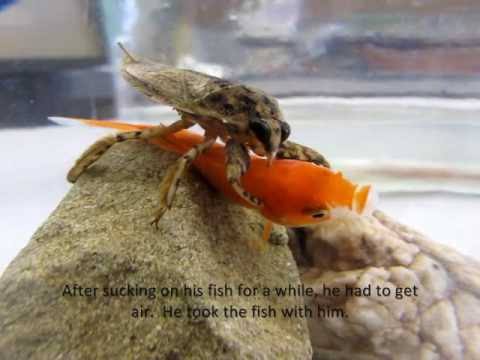 Japanese water bugs are also creatures adapted for a more liquid diet, not because they simply drink the blood or tears from whatever they catch, but because they use their sturdy dagger-like mouthparts to stab their prey, injecting enzymes and anesthetics that break whatever they catch down into a nutritious liquid which they drink through the very same proboscis they used to inject said enzymes. These bugs also rely on powerful raptorial front legs (essentially front legs adapted for grabbing things, a good example is the praying mantis'forelegs) to pin down prey while they let the enzymes they injected do the rest. Their size and potent digestive chemicals allow them to prey on a variety of creatures, including snakes, fish, baby turtles and even ducklings.

In order for your butterflies to have such a diet, they'd need to undergo some changes. I do believe a moth-like body plan would be more suitable as their habit of keeping their wings more well tucked to their bodies would make it less likely that they'd be damaged. As for the other anatomical changes they'd require to be predators: not only would they need to change their long flexible mouthparts for sturdier shorter ones, more in line with what's seen on water bugs, assassin bugs and other insects that engage in such a predatory behavior, they'd need to adapt their legs into raptorial appendages suitable to pinning down prey. My personal guess is that their front legs would resemble those of an ochteran mantis fly in many ways (see below). 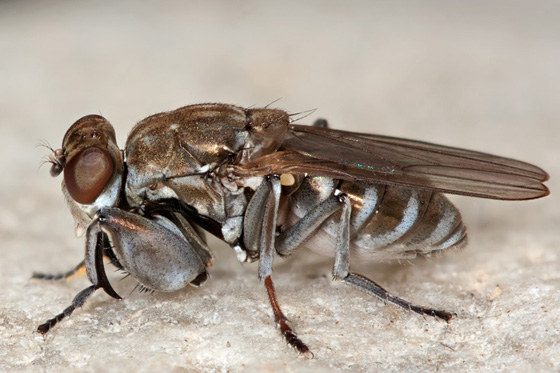 So summing up: can they feed on blood? Yes, but that'd make them parasites and would likely leave them dependent on the presence of large enough creatures for them to feed on. Could they be predators? Also not impossible, but rather than just blood they'd drink the liquefied remains of whatever they managed to catch, and would most certainly require changes to their mouth parts (particularly involving them becoming shorter and sturdier in addition to the adaptations related to piercing), the ability to produce and secrete special digestive enzymes, their legs to adapt into stronger raptorial limbs more in line with a predatory lifestyle centered around grabbing hold of and pinning prey down while the digestive enzymes to the magic and potentially their wings would need to be capable of folding more tightly against their bodies in order to minimize the risk of damage by the wild flailing of caught prey trying to escape.

They exist - as small creatures.

First, to be clear, your vampire butterflies and vampire moths have already been done quite nicely. That said, you still have the infamous square-cube law to deal with - this isn't as absolute a barrier as some make it out to be, but you'll need to propose stronger faster muscles and wings and mechanisms to get the energy to them. The mechanism of flight is not so easy to comprehend, but changing these other parameters is likely to alter the important aerodynamic considerations, driving an overall redesign in wing shape and usage. But butterflies are also infamous for their easily abraded scales - the pretty wing patterns come off in curious fingers. If you have to turn up the air flow to helicopter speeds, you'll need a work-around. The wings, naturally, will have to be thicker (and heavier) to hold up so much weight. The proboscis will need an extensive redesign, because it will be pulling fluid over a distance that interferes with the normal role of capillary action. So ... by the time you finish reevolving your butterflies, they probably will no longer look or act in a way that seems very butterfly-like. Even an Earthly animal as closely related as the hawkmoth no longer seems very much like most people's mental picture of a lepidopteran.

The problem with butterflies of any size as predators is maneuvering. Butterflies (and lepidoptera in general) tend to flap their large wings gracefully and slowly as they flutter through the air. So how do they catch their prey?

There are, as the answer by @ProjectApex points out, moths that have evolved a carnivorous lifestyle. However, in doing so they've evolved much smaller wings that what we consider typical of butterflies (and the showier moths). So your carnivorous butterflies won't look like butterflies.

One possible approach is to model your creatures after the hummingbird moths: https://www.fs.fed.us/wildflowers/pollinators/pollinator-of-the-month/hummingbird_moth.shtml While they also don't look much like the conventional idea of butterflies (they look and behave like hummingbirds - a great example of convergent evolution), it's fairly easy to imagine them evolving a carnivorous lifestyle. Instead of sucking nectar from flowers, they dart at animals, pierce their skin with their sharp proboscis, and feed, in the manner of a giant mosquito.

Another would be to have your giant lepidopterans be stealthy predators. Like the vampire bat, they sneak up on sleeping prey.

If you want giant (ignoring square-cube law problems and such) insect-like flying predators that are also fairly showy, why not consider dragonflies instead? They're fast & highly maneuverable winged predators.

Another problem with butterflies as predators is that some of them don't actually eat. They live off food stores gathered as catepillars. For instance, the Hercules moth, about as close as Earth gets to a giant butterfly: https://en.wikipedia.org/wiki/Coscinocera_hercules

Time for another answer that doesn't fit the mould! Guess what we'll be doing today? Making a giant butterfly that melts the insides of its prey... hooray?

If you want your butterflies to have gigantism they need to get as much energy from their prey as possible. Only feeding on blood is very limiting. Consider this: it takes between 600 and 650 kilocalories of energy for your body to replace the contents of a pint of blood. The capacity of your body to store muscle and liver glycogen, however, is limited to approximately 1,800 to 2,000 calories worth of energy, or enough fuel for 90 to 120 minutes of continuous, vigorous activity. All of this energy excluding your fat stores, that's a big meal indeed.

You'd want to rupture every cell in the preys body to get all of the nutrients in liquid form, the only form a butterfly can consume. So I suggest external digestion similar to how spiders eat (or drink rather).

The problem with this method is the melted prey leaking, which would waste precious nutrients. Wrapping their prey in a cocoon is an option, IF they maintain this ability into adulthood (seems unlikely). Wrapping the wings around the prey while eating seems like a cooler concept. A flying Venus flytrap!

This wouldn't be straightforward to adapt (it's basically puke feeding), but neither are giant caterpillars. Your magic system can help with that.