From what I’ve researched, Saturn’s moon Titan is believed to have a methane cycle throughout its seasons. Particularly, during the winter season, methane rain falls, filling Titan’s lakes and rivers. However, between low wind speeds and gravity, the storms generally seem relatively tame, assuming one is already equipped against Titan’s cold and darkness. Could these rainstorms be powerful or unexpected enough to directly threaten a base of astronauts living on Titan? Could Titan’s lakes rise fast enough to catch someone off guard or swamp a campsite? I know there’s still very much we don’t know about Titan, but I was thinking of a monsoon/flash flooding scenario and do not know if that is vaguely realistic. If it helps, assume the resident humans are somehow hopelessly ignorant of Titan’s weather.

Could these rainstorms be powerful or unexpected enough to directly threaten a base of astronauts living on Titan?

Sure. On Earth we are used to expect certain weather because today we have a large network of observatories monitoring it and in the past we had a large collective memory of empirical observations helping us forecasting the local weather.

Of course both of these will be missing on Titan upon arrival and will take time to build up. Apart from "common sense" advice, like not setting a camp in the bottom of what looks like a flow valley, colonist on Titan will be blissfully ignorant and at the mercy of the elements, and almost by definition the weather will be unexpected. To further increase the danger, we are not talking about liquid water, in which more or less we can manage or fight to float, but liquid methane, which is a tad colder and therefore more dangerous. 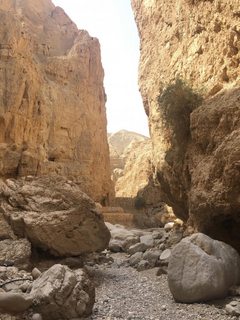 It is a great place for a base because the natural walls can help take some of the pressure for the pressurized interior of the base.

It is scary! The methane rolls down the wadi. It covers the base. It could have been predicted but the builders were planetary scientists and did not recognize what the wadi was.

Built things act as a dam. The methane pools up in the wadi and freezes. The base is underneath. But it is no big thing to tunnel up to the surface.

The methane is not very heavy. The base was already overbuilt and can easily withstand the weight. Having the base "underground" turns out to have advantages later in the story when new unexpected challenges turn up. Engineers who did not recognize they were building in a wadi and were castigated earlier in the story now strut around, taking credit.

If they are foolish enough to establish their base on danger zones. Now, water or any other liquid will flow to the line of the lowest resistance and signs of previous floods should exist. Even if they are not, common sense should tell them the main habitat should be on the upper ground. Be it only they'll appreciate a good comms reception, which is always better with direct line of sight. (no, I don't believe they'll carry solar panels to Titan, too much weight for too little reward, so sunlight exposure is not an issue).

This being said (by L.Dutch too), there are some circumstances that put the risk of danger from Titan's methane flooding at a lower one than Earth's water.

This two mean that the energy of a methanefall will have just 9% of the energy (per volume) of a waterfall from the same height on Earth.

When you are out in the open, if you're skilled enough on hop-running (kangaroo style), you may get out of the way of a flash flooding (or even race in front of it in the same direction without getting caught. I don't know for sure, I should check what height is required for the methane to flood from to get to the speed a human can attain in low-g).

Even more, jumping or climbing on higher ground should be less of a problem for the capabilities of an average human (assuming they didn't stay on couch-potato position long enough for the muscular atrophy to set in).

Now, concerning silt, mud or rocks that a flash flood tends to dislocate on Earth and try to pile on you.
One of the NASA pages informs that the liquid water is lava, the dunes are made of solid hydrocarbon (with a coffee ground like size), and the tectonic plates are likely made of water ice.

All of those hydrocarbons are less dense than water, so if you survive under a 3m snow set on top of you by an avalanche on Earth, you should be able to survive uncrushed under... say hydrocarbons with 0.8 density of water at 0.138g... with about 27 meters of typical Titanian solids on top of you and you will be in a risky-but-maybe-survivable situation (assuming you have enough air to breath and the thick coat your using to fend off the -180C worth its money)

Falling into a liquid methane pool? Maybe we got you covered (that is, if you don't take a plunge covered with just your swimsuit)

Most of the hydrocarbons (liquid methane included) are non-polar and hydrophobic. Which means that a 100% cotton towel you always carry a towel is space, don't you? will likely not get liquid-methane-wet (awww, no fooling around with wet T-shirt contests or the like in college).

Now, don't take the thing with the cotton towel literally, but... I'm pretty sure one can micro/nano structure the surface of the suit for outside activities in such a way that, with minimal heating across (BTW, the latent heat of evaporation for liquid methane is 8.17kJ/kM which is only 20% of water's) will create a layer of gaseous methane trapped into a the nanostructure and keeping the liquid methane away from your suit - such nanostructures can stay dry underwater for days on Earth, I'm pretty sure the same trick can be pulled for liquid methane too.

That should take care of your survival would you be to fall into a liquid methane pool or have it dumped on you by a flash flooding.

I suspect that it's not that likely but is possible. For a story it should be easily possible to suspend disbelief. To increase the believability I would have a large more distant lake over top with methane. Assuming the methane can erode some of the sediment it should be possible to imagine a catastrophic failure moving a lot of methane like this: https://www.youtube.com/watch?v=BNFQ1EJX4h0 Not going to be as rapid or as dramatic but could still be deadly.

Not the answer you're looking for? Browse other questions tagged reality-check space weather .

4
Would it be possible to shift Titan from its current orbit into an orbit around Earth for terraforming purposes?
6
Separating continents causing massive flooding?
5
Noticing a space-fight or, A muzzle-flash on the deep
3
Planet Titan, could this work?
6
Could an ancient civilisation create plastic on Titan?
5
Square Cube Law and The Titan Whale
2
Sprinting Downforce on Titan
4
Accidentally detonating Titan?