Dam in the Mediterranean

I am looking to write a story where part of the Atlantropa project goes through. Now I know about all the issues with it: the soil is covered in salt and unusable, it raises sea level in other places, makes existing coastal cities landlocked…

But my question is different. I am wondering if it would be possible to achieve some of the effects of the planned project (i.e. lower the Mediterranean by several meters) by placing a dam between the Mediterranean and the Black Sea, but not at Gibraltar (on account that it is too big of a dam to build — in my scenario they begin building it but never manage to finish it).

I guess it's a difficult question to answer, but some people might know more about the hydrology of the Mediterranean than I do.

Thanks a lot for the help!

According to the information I can find, the net contribution of the Black Sea to the Mediterranean sea is about 5000 cubic meter per second

The net flow through the strait, estimated from the Mediterranean water budget, and the Mediterranean outflow, estimated from currentmeter observations in Espartel sill (western Strait of Gibraltar) from October 2004 to January 2009, made it possible to estimate the Atlantic inflow as the sum of both of them. The obtained mean net flow is 0.038 ± 0.007 Sv, with a seasonal cycle of 0.042 ± 0.018 Sv annual amplitude and maximum in September. The Mediterranean outflow shows a seasonal signal with annual amplitude of 0.027 ± 0.015 Sv peaking in April (in absolute value), and a mean value of −0.78 ± 0.05 Sv. The resulting Atlantic inflow has a mean value of 0.81 ± 0.06 Sv and a seasonal cycle with annual amplitude of 0.034 ± 0.011 Sv, peaking in September, and high interannual variability.

I don't think that damming the Black sea alone will make a dent in the Mediterranean sea level: the same paper I cited above mentions that the average Atlantic inflow is 0.81 Sv, and that means that the flow through Gibraltar can easily accommodate the missing inflow from the Black Sea, simply by reducing or nullifying the Mediterranean outflow.

And the fault is quite active based on the list of earthquakes listed by Wikipedia for the last 81 years. And it looks like the Anatolian plate is drifting relative to the Eurasian plate at a rate of about 30 mm/year

Now, a dam over Bosphorus will slowly raise the level of the Black Sea and cause just a wee more water to infiltrate and lubricate the fault. Me thinks that is bound to accelerate a bit the fault movement. 50 years at, say, 50mm/y spells real trouble for that dam.

I wouldn't want to be around when a reverse Black Sea deluge happens. because Bosphorus will get deeper and the outburst flood will get to take some of the choked full of hydrogen sulfide mud in the Black Sea. 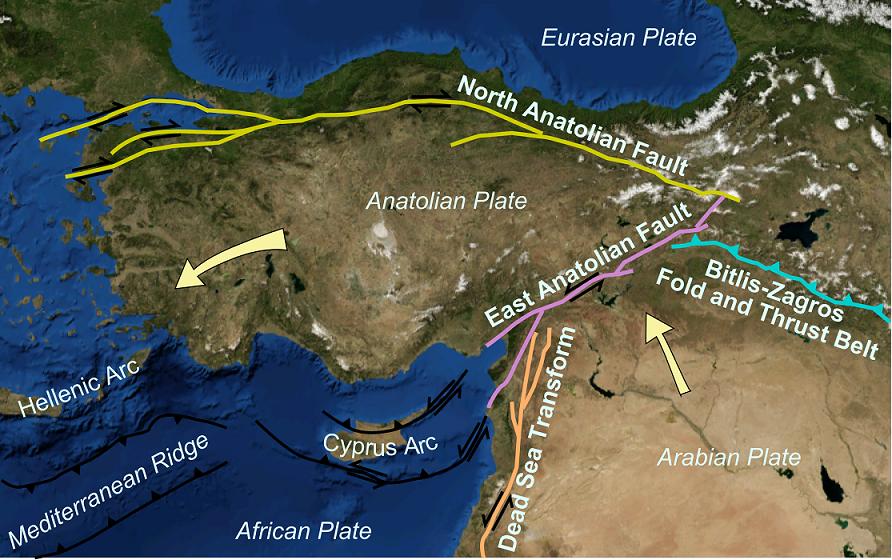 It is very obviously impossible to lower the Mediterranean to any significant degree as long as it is connected to the ocean. Communicating vessels etc.

Not the answer you're looking for? Browse other questions tagged science-based engineering hydrology .

16
Would a Roman civilization be willing and capable of building large scale sea defences against a serious but unrealised flood threat?

9
Semiliquid atmosphere - Is my premise/conclusions correct; and will it get the result I want?
6
What would a receding seabed provide for human civilization?
7
Is it feasible to separate the Mediterranean from the rest of the world's oceans using dams?
6
How to drain out the entire Mediterranean?
7
The Project Sahara V2
1
Post apocalyptic science based story
24
What effect would liquid sulfur oceans, sulfur dioxide in the atmosphere have on visibility, sound propagation and other environmental information?
16
Would a Roman civilization be willing and capable of building large scale sea defences against a serious but unrealised flood threat?
22
Is this coral lagoon geologically possible?