Could this centaur anatomy work and fit together?

The centaur externally appears very human-like. Their forelegs are humanoid but with a horse's hoof on the end. They also have human-like hips to support the forelegs. The horse body is similarly sized to the human body, and is connected horizontally so that the lowest part of the chest is contiguous with the region between the forelegs. The horse body appears to connect at the front of the chest, with no shoulders. They are capable of running like horses

With regards to how its skeleton and muscles would connect and fit together, could this centaur realistically exist? 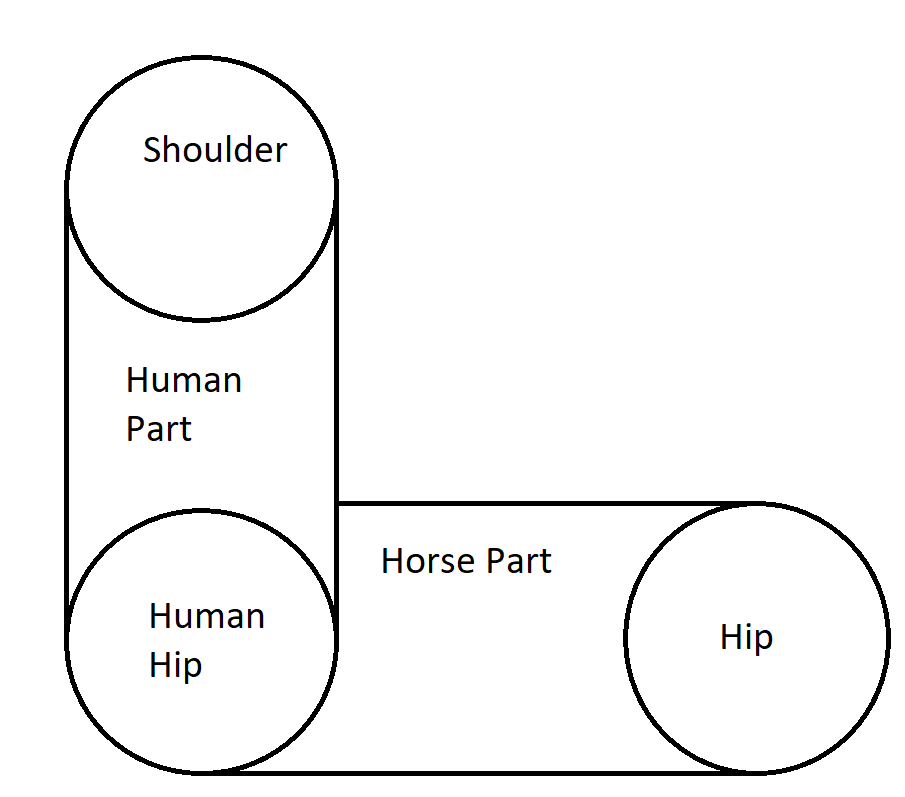 This is a great question! Sadly, I don't think this creature will function given the description.

Essentially, this is a human with a horse torso sticking out of ids bum. In order to see why this won't work, let's take a quick look at why normal centaurs do work. Normal centaur anatomy is a horse body with a humanoid torso & head that replaces the horse neck & head. Physiologically it works like a horse because the main body and legs are arranged like a horse. It's bones and muscles are those of a horse, so it can run like a horse.

Human anatomy & physiology is uniquely adapted to an upright posture and full time bipedal locomotion. In particular, the lumbar spine, sacral spine, pelvic girdle and hip joints are all rearranged from the ancient mammalian plan to support this stance. The musculature is also rearranged.

In particular, the gluteus muscles are highly developed and enlarged. Also, the relatively straight spine of most mammals is curved: the lumbar spine curves back, the sacral spine is beginning to curve down and the caudal spine reoriented so that it curves almost forward, pointing inside the body.

In order for the extended trachea and esophagus and great vessels to pass through the pelvic floor, and also to accommodate the larger equine spine, the hips would have to be spread apart laterally. Similarly, the muscles of the humanoid midlegs would need to be moved aside laterally & rotated posteriorly with the pelvic skeleton. Worst of all, the humanoid lumbar spine will have to be twisted and bent into an almost 90deg angle in order for the humanoid torso to remain upright and the humanoid head to face forward.

The hooves of the midlegs are another problem with this creature's design. You describe a singular "hoof" on each midfoot, but as we know, a hoof is simply a horse's toenail! A humanoid leg with its humanoid foot would sport five hooves. The hooves themselves would be useless because of the plantigrade orientation of the humanoid calf-ankle-tarsal region. Humanoids walk on their heels, equids walk on their tippy-toes.

Why it Won't Work

The creature you describe is essentially what I call the humanoid with dysfunctional fantasy tail. We see them all time in manga and fantasy works. And this excellent illustration of a "human with a tail" demonstrates why neither furries nor your creature can work: 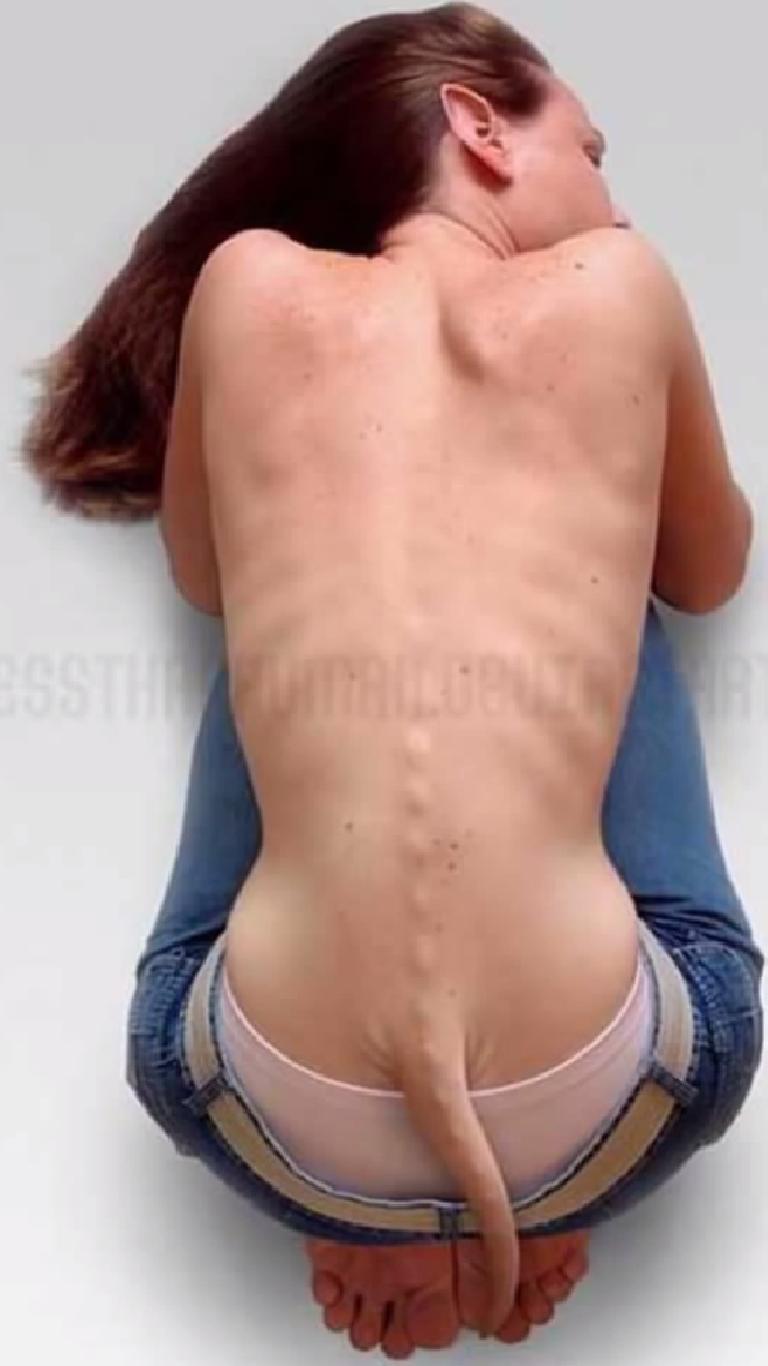 Notice those five lumps all in a row just above her "tail". Those are her lumbar vertebrae. L1 at the top, L5 just above the "tail". The artist put similar lumps on her "tail", in an effort to make us think that these are caudal vertebrae. (The artist also put some skin folds just at the base of the "tail" to make us think that her anus is right there where it should be at the base of the "tail".

But this anatomically not possible. Those lumps can't be her caudal spine and her anus isn't really where the artist apparently thinks it should be! Her "tail" is actually stuck onto her body at S1. The only problem is, her real S1 lies underneath, between her ilia, the crests of which you can see very nicely on either side, just above the line of her shorts. Her real sacral & caudal spine continues to curve downward and anteriorly between her hips and the posterior musculature of her legs, her glutes in particular.

Apart from getting the anatomy wrong, the artist also failed to actually depict a sacral spine entirely. The depiction would actually make sense if you got rid of her hips and her legs and made her into a mergirl.

Tailgirl's fantasy tail and your centauroids' equine body sticking off their humanoid hips fail simply because the arrangement is not compatible with the humanoid pelvic architecture. The rearrangement of the pelvis won't allow the humanoid legs to function, whether they have hooves or not.

Your centauroid's humanoid midlegs, apart from being dislocated enough to be nonfunctional as humanoid legs, also sport relatively delicate feet. The extra weight of the equine body resting on even healthy and well aligned legs will be problematic for standing, to say nothing of the incredible forces placed upon them whilst running.

Ultimately, I find this a very interesting take on the usual centaur type of creature. The anatomy & physiology that your design would exhibit makes for a fascinating journey into speculative anatomy. Even though your query is not tagged as such, its nature is that of a reality-check question.

From that perspective, and in the context of the physical description and anatomical requirements to make it look like the description, this creature is just not plausible given the design constraints!

Not the answer you're looking for? Browse other questions tagged creature-design fantasy-races anatomy humanoid centaur .

41
How do centaurs get enough calories to live?
7
Ideal Centaurs: A Torso and Four Legs
19
Anatomically Correct: 4-legged sapient creatures (“centaurs” etc.)
3
How big of a taur do you get out of a human?
1
A reverse centaur walks into a bar - Why the long face?
7
Can a Mad Science Experiment Involving Men and Horses REALLY Create a Realistic Centaur?
2
How would the crocodile-people move?
19
Could Centaurs wear Dresses?