How close could a creature longer than Jupiter get to Earth without destroying it?

So basic introduction: my world has things which naturally should never exist due to seemingly violating certain laws we deem as natural, for this, let's just call them "anomalies". Among these various creatures lies one of the most troublesome, simply because it's proportions may most certainly represent a threat.

The creature in question is a space-faring, serpentine-like being that's seemingly made of a singular type of tissue that's borderline indestructible, and sustains itself through strange organs inside of itself which provide both the energy it needs to survive and the propulsion mechanisms it needs to travel through space.

Here's a crude drawing of the being near earth and Jupiter to better illustrate: 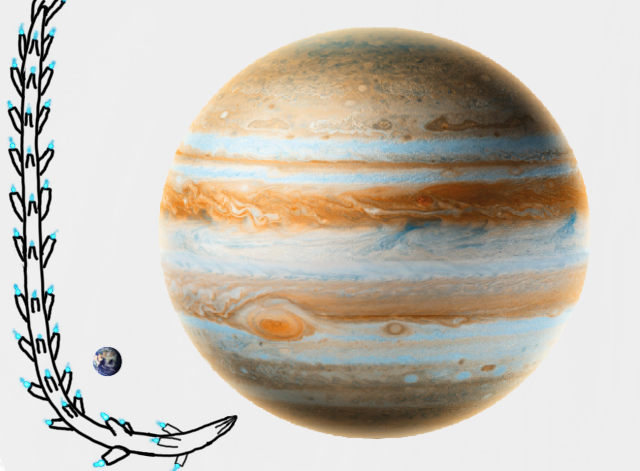 In the current moment of the story, this being has come closer to our solar system, and, for plot reasons, I wanted it to get as close to earth as possible without outright destroying the planet.

Now, the main problem started to appear when I went to research on the effects of such a thing existing and how it'd interact with nearby celestial bodies (I was having problems picturing the effects of such an astronomical creature in the solar system, and I am no expert in astronomy or the physics involving celestial bodies and planetary masses). I was fairly unsuccessful in understanding how it's own gravity would work, assuming it's mass would still be enough to generate a noticeable gravitational pull despite its shape. I did however find some worrying side effects of its large size and mass while looking for questions with similar themes on this SE, such as that the creature's sheer mass and potential gravity might cause it to shatter the earth's crust simply by getting too close, temporarily mess with the orbits of some planets and even risk causing the moon to be "slingshot" away, unless I got something wrong in what I've read.

So summing it up, because asking about its effects on the solar system would be too broad, what's the closest such a creature could get from Earth before it started to cause serious risks to the planet's integrity? Besides its nigh indestructible body and seeming violation of the laws of thermodynamics, the creature conforms to all known laws of physics.

Answers which also include the effects of it getting too close and whether its long form would cause any major changes to its roche limit, if at all, would be greatly appreciated, as understanding how it's own gravitational forces manifest in its non-spherical body are my main problem right now .

If I've missed any important details or failed to clarify something, please let me know so that I can fix these problems.

I used university simulator to simulate what a close encounter between Saturn (which is of a similar mass to earth) would do to earth. 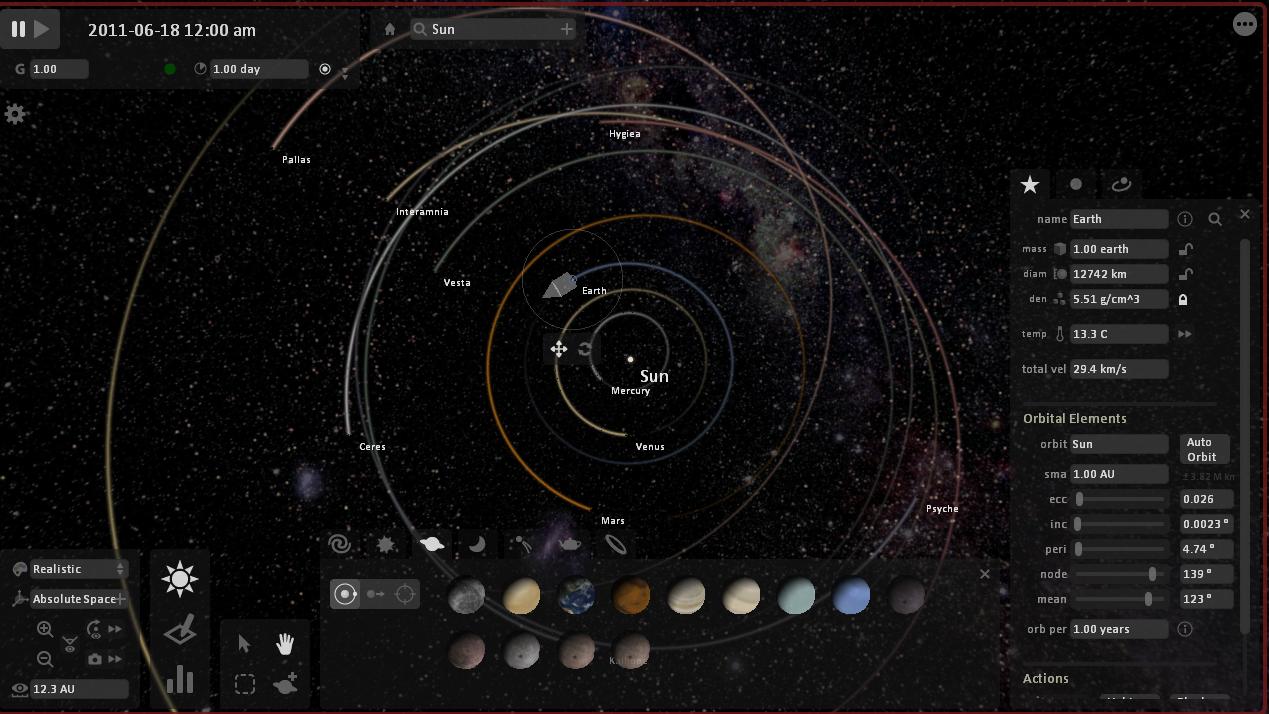 Here is Earth, happy and in a normal orbit. 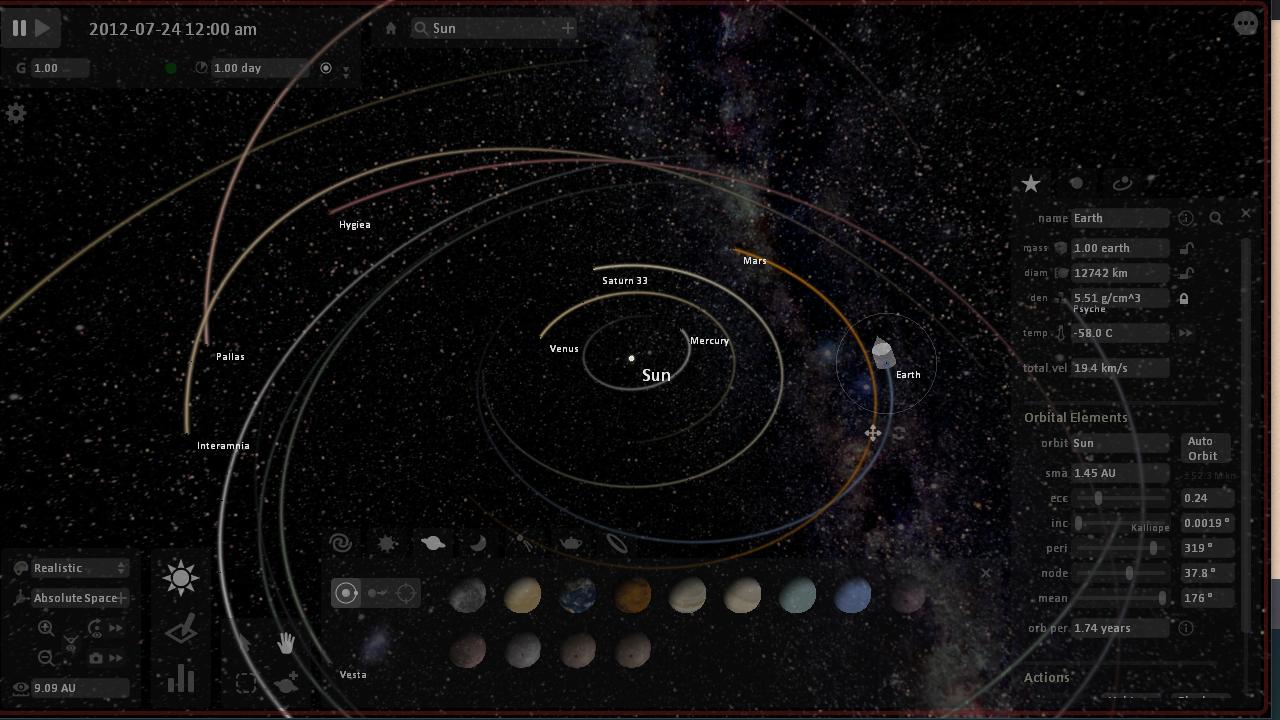 Here is Earth, in a rather unpleasant orbital distance of 1.45 AU after Saturn flashes near earth and a year passes.

Saturn's Rings are notably wider than Jupiter. The Roche limit of the stellar snake will be at a similar distance. The shape will cause sharper fluctuations.

Having a roaming Saturn would be catastrophic to life on Earth if it got anywhere close, so you might want to reconsider it's speed or gravity if you want it to get close and humans to not all die.

Edit. To calculate the approximate impact of a Saturn near Earth, use this calculator.

Compare this number to this list of energy magnitudes. This is enough force to evaporate most water on earth, and 100,000 times more energy than the energy of the most destructive earthquake in history.

You can adjust the numbers as you choose.

Considering that Jupiter is already massive enough to perturb Earth's orbit, it;s safe to say that that thing should not get anywhere closer than somewhere between the Jupiter orbit and the asteroid belt, even though I am afraid that already its passing through the Oort cloud will cause a massive meteor shower toward the inner solar system, thanks to the jolt it will give to all the bodies orbiting there.

Past that the most likely effects will include disruption of inner solar system orbits, Earth included.

Not the answer you're looking for? Browse other questions tagged science-based planets physics astronomy .

25
Protect a planet against a black hole attack
2
What would happen if an object on Earth has an equal or greater gravitational force than the Earth?
3
What is the most optimal thruster placement in a planet-sized creature?

7
Could a planet larger than earth with half the gravity have a denser atmosphere?
20
How would other planets in a solar system be affected by the disappearance of one planet?
4
How extreme can I make an altered solar cycle without destroying an inhabited world?
7
Could an unstable system of several celestial bodies exist?
0
How could it be possible for an entire region of space to be filled with Earth like planets?
12
How close could another solar system be without adversely affecting our own?
3
What is the most optimal thruster placement in a planet-sized creature?
3
How slow and and how close could a rogue planet pass by the Solar System not to have catastrophic consequences on Earth Orbit?